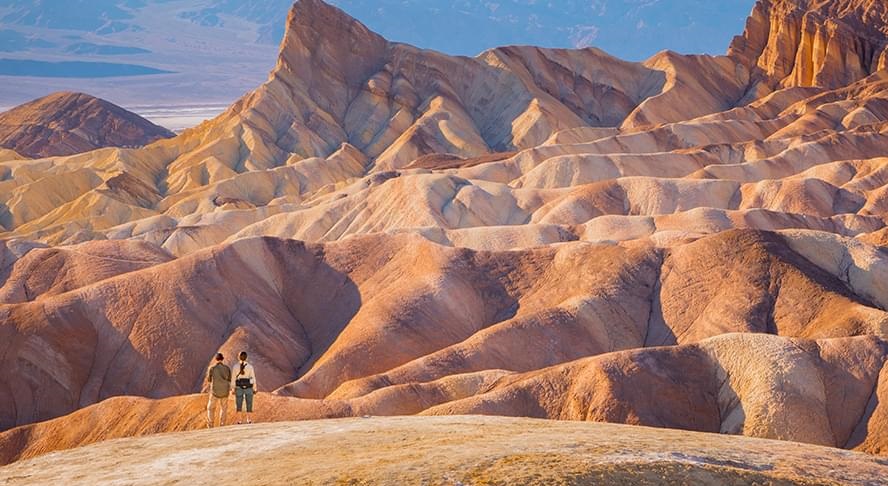 Death Valley, located in California, is the hottest, driest, and lowest place in the United States. It is an area of sand dunes and wilderness. Non-Indian tourism into this desolate region actually began in 1926 and in 1933 President Herbert Hoover created the Death Valley National Monument by Presidential Executive Order. While some saw this act as the first step in transforming one of the earth’s least hospitable spots into a popular tourist destination, for the Timbisha Shoshone, the aboriginal inhabitants of the area, this action made them landless. While the Timbisha Shoshone were not forced from their traditional homeland, the control over their land (and thus over their lives) was assumed by the National Park Service. Death Valley officially became a National Park in 1994.

Death Valley is called tumpisa by the Timbisha Shoshone. The name means “rock paint” and refers to the red ochre paint that can be made from a type of clay found in the valley. The name Timbisha means “Red Rock Face Paint.”

The Shoshone language belongs to the Numic group of the large Uto-Aztecan language family. The homeland of the Numic-speaking groups in the Great Basin is generally seen as the Death Valley area. Linguistic data seems to suggest that these groups began their migrations from this area into other parts of the Great Basin about 1,000 to 1,500 years ago. Catherine and Don Fowler, in an article in the Utah Historical Quarterly, report:

“Archaeological and linguistic evidence indicates that the Numic-speaking peoples spread across the Great Basin sometime after A.D. 1000, displacing or replacing the earlier carriers of the Fremont and Virgin Branch Anasazi cultures in Utah, eastern Nevada, and Northern Arizona.”

Among the Timbisha in the Death Valley area, the bands were quite small—15 to 20 people—and traveled on annual rounds of hunting and gathering.

In traveling their annual rounds, the Timbisha used baskets for transporting food and belongings between their camps. As non-Indian tourists discovered Death Valley, the Timbisha baskets soon became collectors’ items and the weavers began making baskets for this market.

The creation of the new national monument in 1933 was the result of lobbying by the Automobile Club of Southern California. Historian Mark Miller, in his book Forgotten Tribes: Unrecognized Indians and the Federal Acknowledgment Process, writes:

“In their initial excitement over the new preserve, monument planners gushed at Death Valley’s unique animal and plant life but seemed to take little notice of the small groups of Indians living throughout the new federal park.”

In 1934, there was growing pressure to remove the Timbisha Shoshone from their homelands in the new Death Valley National Monument. With the closure of the Pacific Coast Borax Company, the Indians were no longer welcome on Company property. In addition, the superintendent of the Monument was concerned that the Indians were destroying the wild life within Death Valley.

In 1936, the Bureau of Indian Affairs and the National Park Service set aside 40 acres as a village site for the Timbisha Shoshone in Death Valley. The Civilian Conservation Corps built timber and adobe houses for the Timbisha. The model community was intended to provide modern homes for Indians near wage work at Furnace Creek. In addition, the community would have a trading post where the Shoshone women could market their intricate baskets and a laundry service where they could work.

In 1978, the Bureau of Indian Affairs informed Timbisha Shoshone leader Alice Eban that her relatives of at least one-half certified Indian blood were now eligible for federal services. However, the BIA ruled that they could not organize as a tribe until they had obtained a land base.

In 1979, the Bureau of Indian Affairs (BIA) sent an “Obvious Deficiency Letter” to the Timbisha Shoshone in response to their petition for federal recognition. The BIA asked the group to prove that it was descended from the historic Shoshone bands that inhabited Death Valley. It also asked them to show that they continued to be a functioning community following World War II. The BIA asked for documentation identifying tribal ancestors prior to the formation of the Death Valley National Monument in 1933 and the genealogical links between the tribe and Indians noted in the early historical accounts.

In 1982, the Timbisha Shoshone obtained federal recognition from the United States government. They were one of the first tribes to obtain federal recognition through the Bureau of Indian Affairs federal acknowledgement process. Recognition, however, did not result in a land base for the tribe which lost its traditional homeland when Death Valley National Monument was created. Without a land base, the newly recognized tribe was not eligible to qualify for grants under the Indian Self-Determination Act.

In 1994, the California Desert Protection Act added millions of acres to the Death Valley National Monument and made the entire area into a National Park. The act included a provision to conduct a study of the aboriginal homelands of the Timbisha Shoshone for the purpose of identifying lands which would be suitable for a reservation. The study was to be done in consultation with the tribe. Of the half a dozen tribes who had lands within a national park at this time, only the Timbisha Shoshone did not have a reservation.

In 1999, the National Park Service and the Timbisha Shoshone reached an agreement which gave thousands of acres to the tribe. Under the agreement, the tribe received 300 acres near the Park’s main tourist center which the tribe could use for homes, a gift shop, a medical clinic, and a motel. In addition, the tribe received 3,000 acres outside of the Park from the Bureau of Land Management.

In 2001, the Timbisha Shoshone held a celebration at their old Indian Village at Furnace Creek. Timbisha elders and the National Park Service personnel met together at a barbeque to symbolize a new era of cooperation.

The Timbisha Shoshone Indians lived here for centuries before the first white man entered the valley. They hunted and followed seasonal migrations for harvesting of pinyon pine nuts and mesquite beans with their families. To them, the land provided everything they needed and many areas were, and are, considered to be sacred places.

At the present time, the Timbisha Shoshone have a village at Furnace Creek.