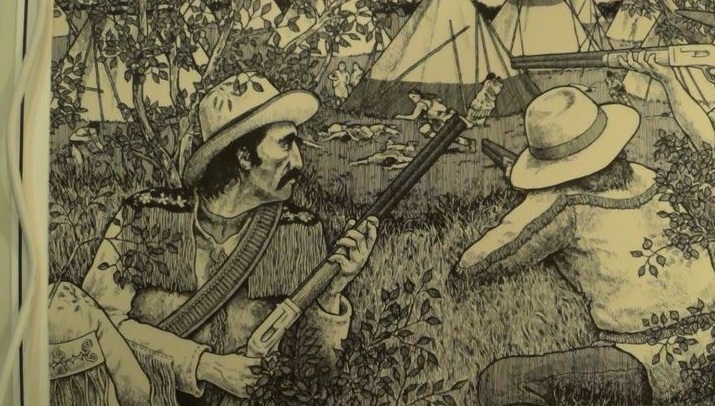 In the 1860s and 1870s packs of non-Indians known as wolfers roamed the Northern Plains of Montana and Alberta seeking to exterminate wolves. They would kill a buffalo, then douse the carcass with poison and wait for the wolves to devour the poisoned meat and die. They would then skin the wolves and collect the bounties. They got $2.50 per hide in bounties.

It was not uncommon for Indian dogs to eat the tainted meat and die. While this created hardships for the Indians, for many wolfers there was little distinction between the extermination of wolves, buffalo, and Indians. They viewed all as a common nuisance whose extinction they sought.

In 1873, a group of wolfers, known as the Green River Renegades, paused in Fort Benton, Montana for some heavy drinking. When they returned to their camp outside of town, they found that they had lost about 40 of their horses. While the horses were most likely captured (some Indians would say “liberated”) by a Cree party, the wolfers made little distinction between one Indian tribe and another.

The Green River Renegades assumed that the raiders would take the horses across the Medicine Line into Canada where they would be traded at one the whiskey forts along the Whoop-Up Trail. These forts were run by American traders seeking to circumvent the US prohibition against selling alcohol to Indians and ignoring any possibility of Canadian law.

The Green River Renegades crossed into Alberta and stopped at Fort Farwell. They asked the trader about any Indians with horses in the area and were informed that there were only some peaceful Assiniboine in the area and that they didn’t have any more than a few horses. Upon hearing this, the wolfers sat down, ordered whiskey and got drunk.

Led by John Evans, the wolfers located the Assiniboine camp of Little Soldier. Abe Farwell, the owner of Fort Farwell, beat the wolfers to the camp and attempted to warn the Indians that they were in danger.

The wolfers attacked the camp, killing 30 people, and mutilating the bodies. The wolfers were well-armed with Henry and Winchester repeating rifles, while the Assiniboine had only bows and a few muzzle-loading muskets.

The wolfers captured a number of Assiniboine women and gang raped them throughout the night. One elder, Wankantu, was clubbed to death and then decapitated. His head was impaled on a spike outside of nearby Fort Solomon.

The Indians protested to the American Indian agent as well as to Canadian authorities, but the wolfers were never brought to justice. Even though the leaders of the Green River Renegades– John Evans, Thomas Hardwick, George Hammond-were well-known in the region. The Americans seemed to have little interest in justice. On the other hand, the brutality of this attack helped stimulate the creation of the North-West Mounted Police and end the illegal whiskey trade in the region.

The Assiniboine refer to this attack as the Cypress Hills Massacre.