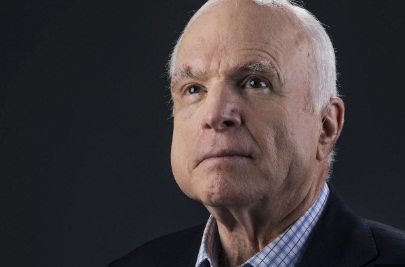 In 1974 the U.S. Government legally endorsed genocide when Congress passed Public Law 93-531, which enabled Peabody Coal Company to strip mine Black Mesa by ripping the traditional Navajo and Hopi peoples from the land.

John McCain introduced legislation (S1973-1 and S.1003), and then claimed that legislation was justified by a non-existent range war between the Dineh and the Hopi. Consequently, that lie was used to justify the Bennet Freeze.

…Jets fly low over the area on an almost daily basis, livestock is impounded by the Bureau of Indian Affairs on the pretense that resisters are “overgrazing” the land, and, due to the special Bennet Freeze clause of P.L.93-531 (which foresaw the possibility of a resistance) Dine people living on what is now Hopi Partitioned Land cannot legally upgrade their housing (i.e. repair a hole in their roof during the winter) without facing the threat of arrest because they no longer legally own the property their families have lived on for centuries. This type of regular harassment has been described as “low intensity psychological warfare” and it has become commonplace against families resisting relocation at Big Mountain.

These families continue to hope that public outcry will become so loud that Congress will no longer be able to ignore the damage which is done every day to people affected by relocation policies. In order to truly respect Native American self-determination, Congress must submit a full repeal of P.L.93-531 and use the money allocated for “relocation benefits” to repair the damage done to those people who have already been relocated (many of whom have yet to receive alternative housing). And while Congress remains reluctant to repeal…

So, McCain made it illegal for the Navajo to repair their housing, even in dire circumstances, in order to steal their land.

Wager called it, “the largest forced relocation of U.S. citizens since the relocation of Japanese-Americans during World War II.” So here’s some sound bites “main” media.

McCain lied about the range war between the Navajo and the Hopi.

The justification for Public Law 93-531 passed by Congress in 1974 was that the Navajo-Hopi land dispute is so serious that 10,000 Navajos near Big Mountain, Arizona, must be relocated, forcibly if necessary. It would be the largest forced relocation of U.S. citizens since the relocation of Japanese-Americans during World War II.

But tradition-minded Navajo and Hopi claim there never was a land dispute. They say the dispute was invented to get the Navajos and their livestock off mineral-rich land in the Hopi reservation so it could be developed by mining companies such as Peabody Coal and Kerr-McGee.

McCain was not honorable in introducing legislation that led to the forced removal of the Navajo.

The Dineh (otherwise known as Navajo) were stripped of all land title and forced to relocate. Their land was turned over to the coal companies without making any provisions to protect the burial or sacred sites that would be destroyed by the mines. People whose lives were based in their deep spiritual and life-giving relationship with the land were relocated into cities, often without compensation, forbidden to return to the land that their families had occupied for generations. People became homeless with significant increases in alcoholism, suicide, family break up, emotional abuse and death.

McCain introduced legislation that resulted in “the largest forced relocation of U.S. citizens since the relocation of Japanese-Americans during World War II.”

“I feel that in relocating these elderly people, we are as bad as the Nazis that ran the concentration camps in World War II.”

“I believe that the forced relocation of Navajo and Hopi people that followed from the passage in 1974 of Public Law 93-531 is a major violation of these people’s human rights. Indeed this forced relocation of over 12,000 Native Americans is one of the worst cases of involuntary community resettlement that I have studied throughout the world over the past 40 years.” — Thayer Scudder, Professor of Anthropology, California Institute of Technology in a letter to Mr. Abdelfattah Amor, UN Special Rapporteur on Religious Intolerance

John McCain’s political history is loaded with abuse of his position concerning lobbyists. Since posting actual links is against HuffPo policy, do the simple research yourself.

Look into the forcible removal of the Dineh tribes, known as the Navajo, in Arizona. Follow his ties to Atty John Boyden and the Peabody Western Group (nka Peabody Energy) and their advantages gained from McCain’s legislation S1973-1 and S1003. He pushed Atty Gen Reno in forcing them off their treaty lands and onto

a nuclear waste site (Church Hill, Nevada) through the “Relocation Commission” Look up PL 93-531. Genocide for the expansion of mining rights. Follow the money that supported his political career from the energy elites that own the Mohave Generating Station in Nevada. John McCain is a corrupt politician and the evidence is there to prove it. posted 02/21/2008 at 11:28:47

So “main” media, do the people have a right to know, or is this how it is?

His critique of the prominent research universities, along with the media, was no less withering. These institutions, self-absorbed, compromised by their close relationship with government and corporations, given enough of the pie to be complacent, were unwilling to deal with the fundamental moral questions and inequities of the age. They had no stomach for a battle that might cost them their prestige and comfort.

So far, it has been.