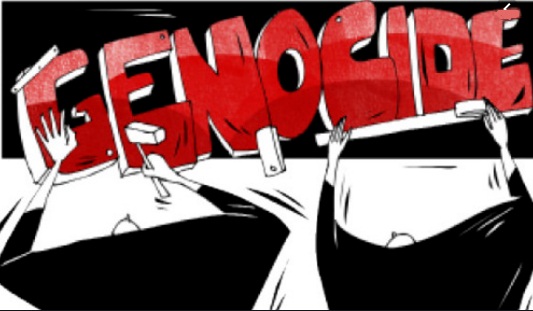 Custer’s method of attack was a four front attack at dawn on sleeping villages. It seems an extreme comparison to make, even irresponsible. Is it however, since George W. Bush and the Neoconservative forces in the U.S. and in Canada who de-affirmed the U.N. Declaration on the Rights of Indigenous Peoples are going to finish what Custer started in the sacred Black Hills? Custer discovered gold there and that brought the railroad along with cultural destruction in the very least. Today, uranium has been being drilled for, and more cultural destruction will probably tragically come about as the result of the TransCanada Keystone Project. But wait, that’s not the only problem.

Considering the degrees of difference between the mid – 1860’s and now in regards to Native Population, language loss, cultural loss (many ceremonies were lost, for example), and that Custer was responsible for a great deal of the loss – I consider this to be Custer’s Pipeline.

Powertech, a Canadian mining company, began drilling uranium exploratory wells in the Dewey Burdock area northwest of Edgemont a few weeks despite the approval of their permit being appealed in court.

The Kilgore pipeline transports crude oil from the Kilgore, TX region south to Houston, TX, which is the transfer point to connecting carriers via the Oiltanking Houston terminal facilities. The 10-inch pipeline is approximately 190 miles long and has a capacity of approximately 35,000 barrels per day for sweet and 23,000 barrels per day for sour type crude oil. In addition, the Kilgore system has approximately 400,000 barrels of crude oil storage at Kilgore and 375,000 barrels of storage at the Texoma Tank Farm located in Longview, TX. These storage facilities will eventually be interchangeable between the two tank farms.

I’ve mentioned before that Custer was a rapist, the pipeline will be yet more rape of the Earth Mother.

The Keystone Oil Pipeline (Keystone) is a proposed 2,969 kilometre (1,845 mile) pipeline with an initial nominal capacity to transport approximately 435,000 barrels per day of crude oil from Hardisty, Alberta, to U.S. Midwest markets at Wood River and Patoka, Illinois.

The commercial commitments support the expansion of the Keystone Pipeline to a nominal capacity of approximately 590,000 barrels per day and will involve the construction of a 473-kilometre (294-mile) extension of the U.S. portion of the pipeline from the Nebraska/Kansas border to a hub near Cushing, Oklahoma. The expansion and extension target in-service date is fourth quarter 2010.

To conclude, Custer’s dawn attacks upon sleeping villages were for the element of surprise. I think it’s fair to say that stealing land and attempts at steal land is now expected; however, the “element of surprise” has been replaced by historical trauma,

REDLANDS, Calif. (UMNS) – The treatment given to American Indians as the United States pushed its boundaries westward has resulted in an ongoing emotional condition that a Native American social worker-researcher calls “historical trauma.”

The “element of surprise” has also been replaced by violence and rape on reservations. How can all of or even most of the people who remain defend their way of life and their culture effectively, while being in the grips of historical trauma, rape, violence and teen suicides?

Women’s advocates in Montana say violence against Native women is an everyday occurrence on the state’s reservations.

Nonetheless, they continue to strive on.

(Custer, South Dakota) – While some South Dakota whites will always be bitter about the Wounded Knee standoff over three decades ago, a Native American national newspaper reporter says a recent benefit concert was a step toward healing race relations while raising money to fight an alarming increase in domestic violence and teen suicide on the Lakota Rosebud Reservation.

Teen suicide is two to three times higher among American Indian and Native Alaskan youths than among other ethnic groups and the general population. People in Indian Country recognize the numbers, Flatt said.

Very last of all, is that genocide denial helps to keep the help so desperately needed away in the appropriate forms that have been requested time and time again by leaders of the tribes. George W. Bush and the Neoconservative forces in the U.S. and in Canada who de-affirmed the U.N. Declaration on the Rights of Indigenous Peoples have now all but said that these American Indians aren’t human beings.

Funny thing, all my life I thought I was a human being in the eyes of everyone –

Pilgrims Pilloried in streets of Plymouth

Hitler wasn’t stopped by the Apaches but by the armies of that country whose conception the Plymouth protesters mourn.

The activists were outraged by my description of the Indians as primitives with a Stone Age culture that had neither a written language, metallurgy nor the wheel.

Reality is awfully insensitive. Still, it’s important to recall that Native Americans did not build great canoes and cross the Big Water to discover Europe.

Theodore Roosevelt spent several years ranching in the Dakotas while there was still a frontier. In “The Winning of the West,” Roosevelt wrote: “Not only were the Indians very terrible in battle, but they were cruel beyond all belief in victory; and the gloomy annals of border warfare are stained with their darkest hues because it was a war in which helpless women and children suffered the same hideous fate that so often befell their husbands and fathers.”

But then again, genocide denial is part of the steel that drills the oil in “Custer’s Pipeline.”

There’s a little Custer in all those sightseers, souvenir hunters, rock hounds, tourist scalpers, sharps and Deadwood hookers which cover these hills (Black Hills) like so many ants.

I couldn’t agree more with the Native American Rights Fund, “The Indian Wars never ended.”
Custer and his 7th Calvary may not be on horseback approaching unsuspecting villages, but it could be said that they’ve gone from horseback to the modern day “Battlefield,” the courtroom. The urgent thing to know is, Custer is winning, metaphorically speaking. In addition to what I’ve already cited:

The Northern Cheyenne have serious concerns about land encroachment

Cattle has been stolen off of Indian land as recent as 2002.

In February of this year (2007), “representative Joseph J. Suhrada (R) simply stated that “They [the county] want to get rid of the Indians”.

ARCHIE HOFFMAN: I guess he did check into the Fort Reno property and found out about all that gas and oil under Fort Reno. So he seen money there, about $50 million. He wanted us to sign a contract giving him 10 percent of that, and he’d get that property back for us. And he said, but if we didn’t do that, he said he’d make sure we never got that property back, you know?

BILL MOYERS: “They want the land given back to them on a platter,” Landow told FRONTLINE when he refused an on-camera interview. “They brought in innocent people like me. They’re a bunch of goddamn uneducated Indians.”

I could go on and on, but isn’t this the basic deplorable negative attitude beneath all this?

‘Oz’ author called for genocide of the Lakota

Six days after the massacre, while the frozen bodies of the Lakota men, women and children were being dumped into a mass grave, L. Frank Baum, the editor of a weekly newspaper in Aberdeen, SD, wrote an editorial calling for the annihilation of any Lakota still alive.

His editorial read in part, “Having wronged them once perhaps we should wrong them again and wipe these untamed and untamable creatures from the face of the earth.”

I’ll reiterate and finish this.

Genocide denial is part of the steel that drills the oil in “Custer’s Pipeline,” is part of what moves the pens making lying papers that are stealing and have stolen the promised sovereignty of American Indians, and what makes the modern day Custers feel joy when they succeed and rage when they fail.

I’d want to support this solution, which is to get Genocide Education into the classrooms everywhere, far and wide. I sincerely believe that it is needed for the Great Indian Holocaust –

Only when we saw them building roads through our land, wagons at first, and then the railroad, when we watched them building forts, killing off all the game, committing buffalo genocide, and we saw them ripping up our Black Hills for gold, our sacred Paha Sapa, the home of the wakinyan, the thunderbirds, only then did we realize what they wanted was our land. Then we began to fight. For our earth. For our children. That started what the whites call the Great Indian Wars of the West. I call it the Great Indian Holocaust.

– in addition to the Genocide Education that is already being taught.