In 1670 the English Crown granted a royal charter to a group of investors incorporating the Hudson’s Bay Company (Company of Adventurers of England Trading Into Hudson’s Bay). The newly formed company proposed to circumvent the French trading monopoly into what was become Canada by locating in Hudson’s Bay. The charter required the company to furnish the King (or his heirs) two elk skins and two black beaver pelts as rent or payment for the charter. 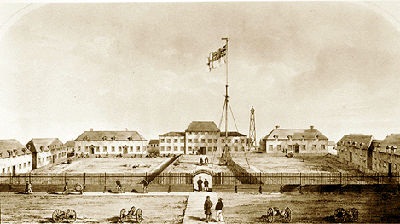 The English Crown, relying on a European legal doctrine known as the Discovery Doctrine, which in their minds gives Christian monarchs the right to rule over pagans, ignored possible First Nations’ claims to the land and granted the Hudson’s Bay Company (HBC) all lands which drain into Hudson’s Bay.  HBC was given all the powers of a sovereign state: absolute proprietorship, supreme jurisdiction in all civil and military affairs, the power to make and interpret laws, the power to maintain ships of war, the power to erect forts, and the power to declare war against ‘pagan’ peoples.

The HBC strategy was relatively simple: to locate trading posts, known as factories, along the shores of Hudson’s Bay where ships from England would unload European manufactured goods and load North American furs. The furs would be obtained in trade from First Nations peoples. The HBC would use a standard advertising technique—word of mouth—to spread the news of the factories and the many wonders that they contained to the inland First Nations. The company envisioned its factories on the coast rather than inland.

The land along the southern portion of Hudson’s Bay was occupied by the Cree. The Cree quickly became trading partners with HBC, bringing their furs directly to the HBC factories rather than trading them to the Ottawa who then would trade to the French. Just as the Ottawa had served as middlemen for the French fur trade, so the Cree now became the middlemen for the HBC.

Cree became a major trading language and many HBC employees learned it. In addition, many Cree learned English. While HBC policies, unlike those of the early French traders and the later traders from the North West Company, discouraged intermarriage with Natives, such marriages were, in fact, fairly common. As the HBC traders and explorers moved inland from Hudson’s Bay, they did so with Cree guides and thus learned the Cree names for the people they encountered: the Dene were called Chipewyn (meaning “Pointy Coats”) and the Inuit were called Eskimo (“Eaters of Raw Meat”).

It should be pointed out that the designation “Cree” comes not from the Cree, but from a closely related people, the Ojibwa, who called them “Kiristinon.” The Cree called themselves “Nehiawa” (“The People”). The Cree were allies with the culturally and linguistically related Ojibwa. Later, as they moved west with the fur trade, the Cree and Ojibwa became allied with the Assiniboine, an unrelated Siouan-speaking people.

In 1684, the HBC built York Fort (also known as the York Factory) at Port Nelson, near the mouth of the Nelson and Hayes Rivers. For more than two centuries the York Factory would be the most important HBC fur trading post. It became the capital of the fur trade.

When the original York Fort was established it was on disputed ground: disputed between two European powers, England and France. With the Treaty of Utrech in 1714 the French withdrew. By 1782, it became the most profitable HBC trading post, trading more than 30,000 Made Beaver per year.

By the 1760s, the fur trade at York Factory began to decline and soon HBC found itself locked into battle against a major rival, the North West Company. To meet the new challenge, HBC began to locate trading posts in the interior. One of the major highways into the interior was the Hayes River. Since the York Factory was situated at the mouth of this river, it gained new importance as the entrepôt for the interior trading posts. For here, European goods would be transported into the interior, and the furs obtained in the interior could be loaded on ships bound for the lucrative English and European markets.

In 1782, a French naval expedition captured the York Factory and destroyed the fort. The following year HBC returned and re-established the post. Disaster struck again in 1787 in the form of a major flood. As a result of the flood, the trading post was relocated to a site on higher ground about two kilometers upstream. Work was started on a complex which combined a warehouse, residence, and workshop. The employees called the new complex the Old Octagon in reference to the shape of the courtyard.

By the 1820s, the York Factory was a small town which included not only the HBC employees, but also a group of Homeguard Cree who lived around the factory. Between 1830 and 1838, HBC constructed a huge warehouse—30 meters square and two stories high—which would be the largest building constructed by HBC until the advent of its retail stores in the twentieth century.

From 1821 until 1846 two brigades each year, known as the York Express, would travel from York Factory to Fort Vancouver in present-day Washington state. Fort Vancouver, on the Columbia River, was the headquarters for the HBC Columbia Department.

By the 1860s, the York Factory was in decline as HBC was able to ship goods to the Red River from St. Paul, Minnesota. In 1957, after 275 years of operation, HBC closed the factory. It was declared a national historic site in 1960 and has been operated by Parks Canada since 1968.