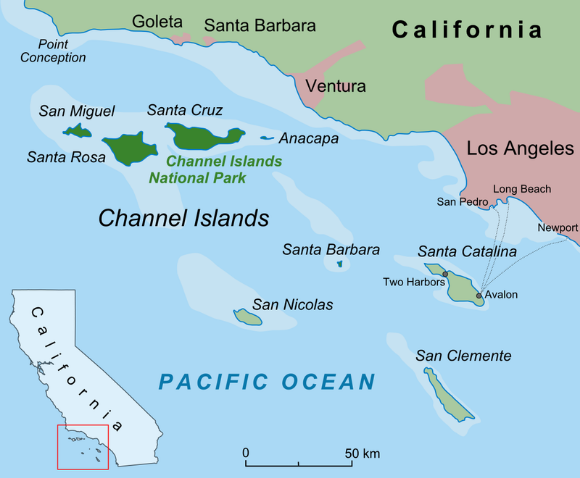 There was a time in archaeology some fifty to sixty years ago, when the basic hypothesis regarding the peopling of the Americas suggested that towards the ends of the last major ice age, as the two major ice sheets covering North America separated to create a passage from the Yukon to the Northern Plains, that people began migrating across Beringia (the land bridge connecting Asia and North America) and then spread out through the Americas. It was a hypothesis that was simple, neat, appealing, and wrong. One of the alternative hypotheses that have been developed over the past half-century or so suggests that some of the early (and perhaps earliest) migrations into the Americas may have been by boat. Part of the data supporting the water craft hypothesis has come from archaeological findings from the Channel Islands which date to the Terminal Pleistocene (an era that dates from about 19,000 years ago until 10,500 years ago).

Channel Islands National Park in California is composed of five of the Channel Islands: Anacapa, Santa Cruz, Santa Rosa, San Miguel and Santa Barbara. The first four are the northern islands and Santa Barbara is a part of the southern Channel Islands. This national park may be one of the most important archaeological areas in the Americas, particularly with regard to understanding the early human habitation of the continent. According to the Channel Islands National Park Archaeological Overview and Assessment: “Both prehistoric and historic archaeological resources within the Park have an unusually high level of significance in terms of criteria for inclusion on the National Register of Historic Places. In fact, they may be considered among the most valuable in North America, if not the world.”

During the Terminal Pleistocene, much of North America was covered with ice fields and the ocean levels were much lower. At this time, there was only one northern channel super-island, Santarosae. As the great ice sheets melted and sea levels rose, Santarosae became four islands.

During the Terminal Pleistocene, the fauna on the islands included a number of animals which would go extinct: a giant mouse (Peromyscus nesodytes), a flightless goose or scoter (Chendytes lawi), and a pygmy mammoth (Mammuth exiliis). All of these overlapped with human occupation. Human occupation on the Channel Islands has been dated to more than 13,000 years ago. According to Channel Islands National Park Archaeological Overview and Assessment:  “Significantly, there is more evidence of occupation on the northern Channel Islands during this period than in most other areas of comparable size elsewhere in California or North America as a whole.”

There are more than 50 archaeological sites on San Miguel, Santa Rosa, and Santa Cruz islands that have been dated to between 13,000 years ago and 7,000 years ago. This is the largest cluster of early coastal sites currently known in the Americas. The earliest people on the Channel Islands are often called the Paleocoastal Peoples and their presence on the island at this time lends support to the hypothesis that the ancient people arrived in the Americas by boat. According to Channel Islands National Park Archaeological Overview and Assessment:  “The archaeological evidence for early maritime settlement of the Channel Islands also has had a significant effect on the growing recognition that a maritime migration may have contributed to the initial human colonization of the Americas.”

While one of the first archaeologists to work on Santa Rosa Island has proposed that mammoth-hunting humans first came to the islands over 40,000 years ago, very few archaeologists today accept this early date. The earliest verified evidence for human occupation in the Channel Islands comes from more than 13,000 years ago when a woman died at Arlington Springs on Santa Rosa Island. At the time she died, the sea level was 150 feet lower than it is today and the Northern Channel Islands were still connected as a single island.

In 1959, archaeological excavations under the direction of Phil Orr uncovered two femurs buried about 30 feet deep in the side wall of Arlington Canyon. The remains were initially identified as male and called the Arlington Springs Man. Orr estimated that the remains were about 10,000 years old. Thirty years later, Orr’s successor at the museum, Dr. John Johnson, re-analyzed the Arlington Springs remains using modern techniques of radiocarbon dating. At this same time, the original site was relocated and re-studied. The new studies determined that the remains were female rather than male and that they were about 13,000 years old. According to Dr. John Johnson, Curator of Anthropology, Santa Barbara Museum of Natural History: “This woman’s presence on an island at this early date is significant, because it demonstrates that the earliest Paleo-Indians had watercraft necessary to cross the Santa Barbara Channel.”

Immediately above the layer of soil in which the remains of Arlington Woman (originally called Arlington Man) were found is a distinctive layer dated to about 12,900 years ago that is linked to the extraterrestrial event that caused an abrupt climate change resulting in the extinction of the Pleistocene megafauna and the end of Clovis culture.

By about 12,000 years ago, people were occupying the Cardwell Bluffs sites near the east end of San Miguel Island. These sites appear to have been multipurpose quarry, workshop, and habitation sites. Among the stone artifacts are chipped stone crescents and small, stemmed Channel Island Barbed points. While shellfish remains show that the people had a marine diet, the crescents and stemmed points suggest that they were also hunting. Both the crescents and stemmed points have been linked to other coastal sites and support the idea of a coastal migration following the North Pacific Rim from Northeast Asia into the Americas.

Daisy Cave along a remote and rocky stretch of San Miguel Island shows evidence of human occupation dating back to 11,500 years ago. The site has a shell midden dominated by rocky shore shellfish including red abalone, black turban (Tegula funebralis), California mussel (Mytilus californianus), giant chiton (Cryptochiton stelleri), and crab. While this is one of the oldest shell middens in North America, it leaves a number of questions unanswered. According to Channel Islands National Park Archaeological Overview and Assessment: “…who were these early maritime people, where did they come from, what technologies did they employ, and what was the nature of their broader economies and lives?”

The first report of mammoth remains on Santa Rosa Island came in 1853 and by the 1920s these were classified as a new species. In the 1940s, Phil Orr, Curator of Anthropology at the Museum of Natural History in Santa Barbara, conducted archaeological field studies in which mammoth bones were found in conjunction with features which were interpreted as hearths. Orr concluded that humans had been hunting and consuming pygmy mammoths. However, recent studies have not substantiated this claim.

Humans and the pygmy mammoths co-existed on the island for at least 200 years. This raises a number of interesting questions regarding the extinction of the pygmy mammoths. Was this simply a coincidence or did human hunting contribute to the extinction? Archaeological data shows that humans on the mainland were hunting mammoths. Did the people on Santa Rosa Island have mammoth hunting skills and knowledge, or was their subsistence lifestyle marine oriented?

Some researchers feel that the extinction of the pygmy mammoths was caused by a cosmic impact which is supported by data from sediments at this time.