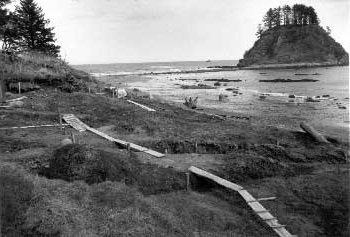 In 1855 the United States met with the Makah Nation in Washington to negotiate a treaty. At this time, the Makah were composed of five semiautonomous villages that shared language, kinship, and cultural traditions. As in other treaty councils, Governor Isaac Stevens told the Makah to select a single man to serve as their supreme chief. When they declined to do so, he simply appointed Tse-kow-wootl, from the village of Ozette, as supreme chief.

Under the terms of the treaty, dictated by Governor Isaac Stevens, the Makah reservation was to be centered at Neah Bay. Only one of the five main Makah villages was included within the new reservation. While the Makah had been successful fishing people for thousands of years, the United States wanted them to become farmers on land which was not suited for agriculture. All of the Makah land which was suitable for agriculture was outside of the new reservation.

With the formation of the Makah Reservation, the village of Ozette is six miles south of the reservation. While the United States government wanted all of the Makah to move to the Neah Bay area, the people of Ozette preferred to remain in their traditional village.

The United States Indian policy was based on the idea of civilizing Indian people through farming. Since the treaty excluded nearly all of the land which could be farmed, a Presidential Executive Order in 1873 expanded the Makah reservation to include some farmable land. However, the village of Ozette, which was still occupied by a number of Makah families, remained outside of the reservation. At this time there were about 200 families living in Ozette.

In the 1880s, the Indian agents on the Makah Reservation were encouraging the Makah families in Ozette to relocate to Neah Bay so that they could be near the schools for their children. With this, the population of Ozette began to decrease. By 1888 only 91 families remained in the village.

In 1893, the 719-acre Ozette Reservation was established by Presidential Executive Order. This action, however, would result in some confusion later on. While Ozette was one of the five traditional Makah villages, the creation of a distinct Ozette Reservation created for non-Indians the illusion that the Makah people on that reservation were somehow a distinct tribe (the Ozette).

The government continued to strongly encourage people to leave Ozette. The population dropped to 44 in 1901, to 35 by 1906, to 17 by 1914, and to only 8 by 1923. In 1911, Congress passed an act directing the Secretary of the Interior to allow members of the Ozette Tribe to receive allotments of land on the Quinault Reservation.

In 1956, the Area Office of Indian Affairs notified the Makah that the Ozette Reservation was going to be terminated. Ozette was to be turned over to the National Park Service (it is adjacent to Olympic National Park), turned over to the General Services Administration, or declared open and unclaimed. The Makah Tribe was given 60 days to respond.

Noting that the Superintendent was opposed to Makah cultural expression and that he had discouraged people from returning to Ozette, and frustrated with the lack of help from the Bureau of Indian Affairs, the tribe submitted a petition directly to the solicitor general in Washington, D.C. and made a personal plea to the Commissioner of Indian Affairs. Concluding that the Makah had no beneficial interest in Ozette, the Interior Deputy Solicitor recommended that Ozette be returned to public domain.

In 1970, PL-91-489 declared that the Ozette Reservation would be held in trust by the federal government for the Makah Tribe. At this time, Ozette was beginning to enter the national and international spotlight because it had become an important archaeological site.