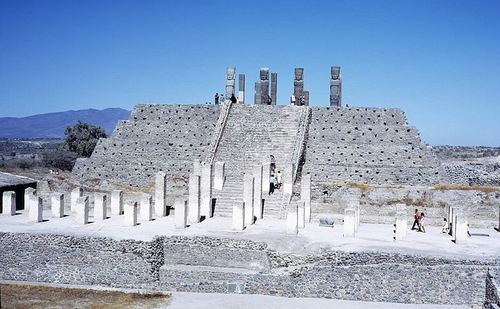 By the time the Spanish had conquered Mexico, the Toltec (also known Tolteca) were revered as mythical rulers of a golden age. They were regarded as the cultural heirs of the great city of Teotihuacán. In his book The Aztecs, archaeologist Brian Fagan writes of the mythical reputation the Toltec:  “They were expert herbalists, jewelers, the originators of calendars and year counts—righteous, wise people in every way, it was claimed. The oral histories depict the Tolteca as tall people who excelled in all the arts and sciences. Hunger and unhappiness were unknown. Tolteca farmers even grew colored cotton and huge ears of maize.”

Prudence Rice, writing in the Dictionary of Archaeology, notes:  “Much of what is known about the history of the Toltecs in Mesoamerica is filtered through later Aztec myths and histories, which they wrote and rewrote to glorify their own accomplishments, and many contradictions complicate the picture.”

While the various accounts of Toltec history are somewhat contradictory, Wigberto Jimenez Moreno pieced together a sequence that is accepted by most scholars. In the late eighth century C.E., the legendary ruler Mixcoatl (Cloud Serpent) had led his people through what is now northern Jalisco and southern Zacatecas to settle in the Valley of Mexico at Culhuacan. According to the stories, Mixcoatl was a Chichimeca (barbarian from the north) who married a noble woman at Culhuacan. After his death, Mixcoatl was deified as the patron of hunting.

While many scholars view Mixcoatl as a mythical or semi-mythical figure, Topilzin is generally felt to have been a real person who was born in the year 1 Reed (935 CE or 947 CE). He is often identified as Mixcoatl’s son and heir. One of the first things Topilzin did was to move the capital from Culhuacan to Tula. While Tula is sometimes translated to mean “place of the reeds,” its meaning implied “the city” (from the idea that people were crowded together as thick as reeds).

The accounts of Tula and the Toltec which were collected by the early Spanish chroniclers, such as Bernardino de Sahagún, seem almost mythical. Unlike the great ancient city of Teotihuacán, there were no immediately observable ruins of Tula. Was Tula myth or reality?  The answer came in 1941 when Wigberto Jimenez Moreno and Jorge Acosta identified the archaeological site of Tula in the state of Hidalgo about 50 miles (80 kilometers) northwest of Mexico City. Prior to being adopted by the Toltec as their capital, Tula had been a small farming community which had been first settled about 650 CE. As the Toltec capital, it became an urban center covering about 7 square miles (11 square kilometers) with a population of about 30-40,000 in the urban core and perhaps as many as 120,000 in the urban region.

The archaeological site of Tula is not as impressive as many other Mesoamerican sites. First, the city had been burned and sacked by an unknown group. Second, the Aztecs had looted the site for its sculptures, friezes, and other items which were then re-used in Tenochtitlan and other Aztec cities.

On a high promontory, the Toltec constructed a ceremonial precinct which was dominated on the north side by a pyramid (designated as Pyramid B by archaeologists) to Quetzalcoatl, the Feathered Serpent God, in his role as the God of the Morning Star.  Archaeologist Brian Fagan describes the pyramid this way:  “Its workmanship is crude compared with that of the pyramids of Teotihuacan. Great warrior figures with flat heads supported the roof of Quetzalcoatl’s temple. The shrine stood on a pyramid faced with panels of walking jaguars and eagles consuming human hearts.”

Pyramid B was built in six successive stages. It is a stepped pyramid platform with a colonnaded hall in front. Archaeologists Michael Coe and Rex Koontz, in their book Mexico: From the Olmecs to the Aztecs, write:  “An ancient visitor would have walked through the colonnade, climbed the stairway and passed through the entrance of the temple, flanked by two stone columns in the form of Feathered Serpents, with the rattles in the air and heads on the ground.”

The major construction of this civic/ceremonial center, known today as Tula Grande, is traditionally dated to 950-1150 CE, with most of the absolute dates at the clustering in the 900 to 1000 range.

Also included in the ceremonial complex are a coatepantli (“serpent wall”), two ballcourts for the ceremonial ballgame, and a Chacmool sculpture. The coatepantli is located to the north of the pyramid and serves to demark the edge of the ceremonial district. The friezes on the wall show a snake devouring a human except for the head.

Chacmool is a type of stone sculpture of a reclining human figure with a bowl or plate held on the stomach. These sculptures are found at the entrances to temples throughout Mesoamerica. The bowls or plates served as receptacles for human hearts.

Adjacent to Pyramid B is the Palacio Quemado (Burnt Palace). This feature has colonnaded halls with sunken courts in their centers which probably served as spaces for ceremonies and meetings.

In spite of the Aztec stories, archaeology has not uncovered any evidence showing that the Toltec actually controlled a large empire. They did, however, participate in the large trading networks that spread throughout Mesoamerica and into the American Southwest. They also appear to have controlled the obsidian mines which had once been controlled by Teotihuacán.

According to the Aztec stories, Topiltzin had been a priest-king dedicated to a peaceful Feathered Serpent cult. He opposed human sacrifice. On the other hand, there were those in Tula who worshipped Tezcatlipoca (Smoking Mirror), the giver and taker of life, the patron of the warriors. As a result of the struggle between the pacifistic Topiltzin and the warriors, Topiltzin and his followers fled the city about 987 CE. As a result, there developed many legends about the migrations of Topiltzin and his people.

The archaeological reality of the Toltec and their capital at Tula is somewhat different than that reported by the later Aztecs to the Spanish chroniclers. Brian Fagan reports:  “The Tula excavations reveal a battle-scarred, militaristic Toltec civilization, one in which oppression was a way of life and human sacrifice second nature, a far cry from the Golden Age of Aztec legend.”

With regard to the Toltec legacy, Prudence Rice writes:  “For the Aztecs, the Toltecs played a critical role as a great ancestral civilization. In order to legitimize their kinds and establish their own noble lineages, the Mexica—likewise of Chichimeca ancestry—contrived to marry into the descendents of Toltec nobility in the basin of Mexico.”

After 1100, prolonged droughts and attacks from new invaders from the north brought an end to the Tolteca.

Tlatilco, an Ancient Site in the Valley of Mexico