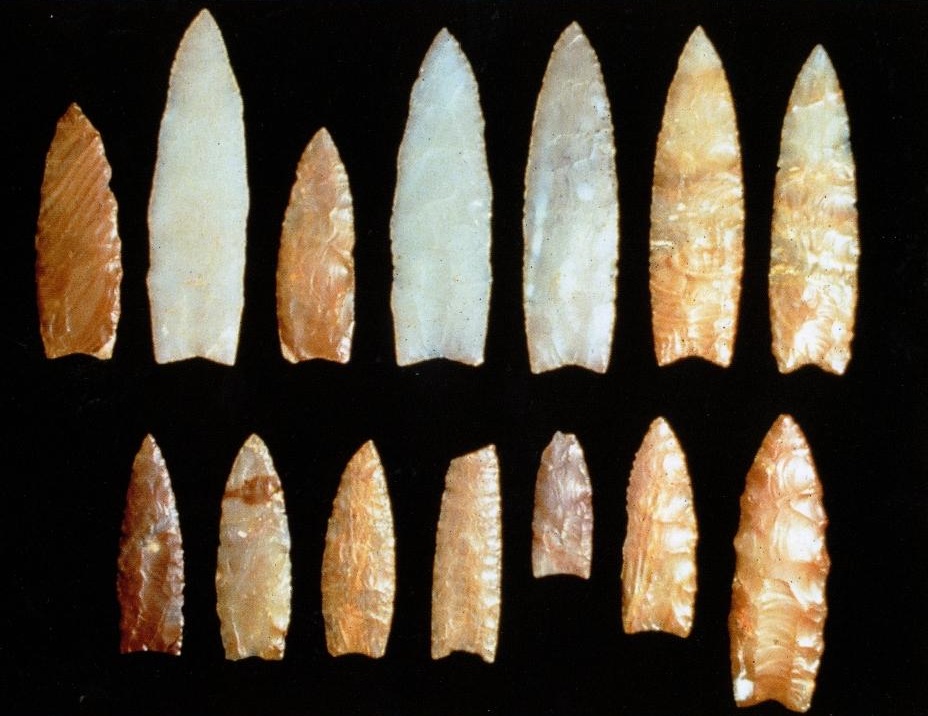 As the ice age was ending in North America, a new hunting technology arose. This technology, commonly known as Clovis after a find in New Mexico, is characterized by a finely made stone projectile point with a characteristic flute which helps in attaching the point to an atlatl dart.

One of the principle weapons used by the Clovis hunters was the atlatl. The atlatl is a wooden shaft with a hook at one end and a handle at the other. The butt of the spear is engaged by the hook. Grasping the handle and steadying the spear shaft with the fingers, the spear can be hurled with great force. Archaeologist L.S. Cressman, in his book The Sandal and the Cave: The Indians of Oregon, notes:  “Thus the atlatl was in principle an extension of the arm and, by the added leverage, gave much greater power to the thrust of the spear.”

The Plateau Culture Area is the area between the Cascade Mountains and the Rocky Mountains in Washington, Oregon, Idaho, British Columbia, and Western Montana. In 1987, a number of Clovis points were discovered below the surface in an apple orchard in East Wenatchee, Washington. As in the case of many major archaeological discoveries, these points were discovered accidently by workers installing a new irrigation system. Recognizing that this might be an important find, professional archaeologists were called in.

The land was owned by Mack Richey and the orchard was managed by his brother-in-law Rich Roberts, and thus the site became known as the Richey-Roberts Clovis Site. Excavation rights were sold to the State of Washington. The scientific excavation of the site was observed by members of the Colville Confederated Tribes as well as the news media.

The initial find at the Richey-Roberts site included 29 items, among which were five large stone points and three short bone rods. To discover more about the site and its overall size, the archaeologists brought in ground-penetrating radar. The radar located a cluster of seven large Clovis points. These points were about twice as large as those found in association with animal remains.

Unlike artifact “collectors” (better described as “looters”) who remove artifacts to display them or sell them, archaeologists pay close attention to the context in which the artifacts are found. At the East Wenatchee site, archaeologists noted that the undersides some of the points had sandy crusts. These crusts detracted from the fine flaking of the points, but provided an important dating clue. A geologist, Dr. Nick Foit, identified the silica in the crusts as originating from a Glacier Peak volcanic eruption. This eruption occurred about 13,000 years ago. The Clovis points had lain on top of the ash when it was still fresh enough to crusts on the points. This meant that the site was somewhat younger than 13,000 years.

The blade surfaces were checked for traces of blood or other animal protein and on one large biface researchers found evidence of both bison and deer. Ruth Kirk and Richard Daugherty, in their book Archaeology in Washington, explain the findings:  “This does not necessarily prove hunting. Residual proteins have many sources. They can come from the leather of a storage pouch, the leather protecting the toolmaker’s hands, from sinew used for hafting, or from blood, hair, or hoof glue in the hafting mastic.”

One of the ways archaeologists study stone tools is with the aid of a scanning electron microscope. This allows them to see the wear patterns on the blade which provides information about how they were used. The large Clovis points, however, show no wear patterns, an indication that they were never used. Ruth Kirk and Richard Daugherty ask:  “Was this a cache intended for later retrieval or were the showy points placed as a ritual offering?”

Use of caches is common among nomadic hunting and gathering people. Since goods and weight are oppressive when you are moving regularly on foot, items which will not be needed at the next resource collection area can be cached and then retrieved when the group returns to the area. Writing in The Oxford Companion to Archaeology, David Meltzer reports:  “Befitting wide-ranging hunter-gatherers who lacked animal transport and were able to carry only limited provisions, they often cached stone for later use.”

With regard to the large size, experimental archaeology has shown that the Clovis points frequently break when they are used. They are then re-flaked into usable points which are smaller than the originals. Instead of ceremonial offerings, it could simply be that the large points are unused points which have not yet been broken and re-flaked.

One of the artifacts uncovered at a number of other Clovis sites are bone rods. At the Richey-Roberts site more than a dozen bone rods were found. There is some speculation that these rods, if fitted with antler tips, could have been used as flaking tools. No antler tips, however, were found with the rods.

Excavation at the Richey-Roberts site stopped in 1990. The location of artifacts was marked with copper cutouts, a sheet of protective geofabric was placed over the site, and it was covered with soil so that the apple trees could be replanted. Ruth Kirk and Richard Daugherty write:  “Without knowing the exact location, no one now would recognize that particular section of the orchard as an important archaeological site.”

The items excavated at the Richey-Roberts site were donated to the Washington State Historical Society.