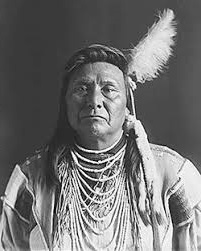 The Nez Perce, whose traditional homelands included parts of what is now Idaho, Washington, and Oregon, entered into the American history books in 1805 when the Corps of Discovery under the leadership of Meriwether Lewis and William Clark crossed over the Lolo Trail into Nez Perce country. The Lolo Trail was a traditional route used by the Nez Perce in going to the buffalo country east of the Rocky Mountains. However, the season was late and the Americans floundered in snowstorms and almost starved. The Nez Perce found William Clark and six hunters from the Corps of Discovery sick with dysentery from gorging themselves on roots and fish.

The Nez Perce warriors considered killing the sick men for their rifles, but they were stopped by a Nez Perce woman, Watkuweis, who had been captured by the Blackfoot and sold to an American trader before returning home. She had been treated well by the trader, so she asked the warriors not to hurt the Americans. Historian Stephen Ambrose, in his popular book Undaunted Courage: Meriwether Lewis, Thomas Jefferson, and the Opening of the American West, notes: “The expedition owed more to Indian women than either captain ever acknowledged. And the United States owed more to the Nez Perce for their restraint than it ever acknowledged.”

The Americans were taken to the village of the war chief Tunnachemootoolt (Broken Arm). The village consisted of a single long building about 150 feet in length with 24 fires down the center and housing about 48 families. The Nez Perce not only fed the Americans and nursed them back to health, they also made maps for the Americans on whitened elk skins which showed them the river route to the Pacific.

The fantasy of the Nez Perce as a single, politically unified tribe would be later forced on them by the Americans during treaty negotiations which would lead, in part, to the 1877 Nez Perce War. Politically, the Nez Perce were a number of politically independent bands and villages unified by a common language and culture. With regard to language, the Nez Perce language belongs to the Shaptin language family which means that they are distantly related to other Plateau area tribes such as the Umatilla, Wanapam, and Yakama.

Prior to the coming of the horse the village was the primary political unit, and decision-making involved all of those in the village. There was no political organization or government which united the autonomous villages and/or bands. The Nez Perce Tribe, in their book Treaties: Nez Perce Perspectives, puts it this way: “We had (and needed) very little political organization beyond the band headmen and peace leaders who insured the safety and provisioning of the women, elderly, and children.”

Village membership tended to be fluid and there was a constant movement of people between villages. Archaeologist James Keyser, in his book Indian Rock Art of the Columbia Plateau, reports: “People were free to change village membership within their tribe, and even to neighboring tribes, and did so frequently either through marriage or simply from the desire to change situation.”

The extended bilateral family meant that people had relatives in many different villages and when resources in one area became scarce, they could easily move to another village.

The Nez Perce band was composed of several villages or camps which were located along a stream. Band names were usually taken from the most prominent village within the band’s territory. Each village had a council which selected and advised a village leader. Anthropologist Deward Walker, in his book Conflict and Schism in Nez Perce Acculturation: A Study of Religion and Politics, reports: “Village leadership was in the hands of the eldest, able male in most instances, this position being semi-hereditary but also based on individual ability.”

Walker prefers to call this leader a “headman” rather than a chief (“chief” tends to be a European concept). He goes on to report: “In the larger villages comprised of several interrelated extended families, there was often more than one such headman. Typically, they were advised by a council of the elderly and prominent males, with women not having a formal voice in such matters.”

With regard to the role of the Nez Perce headman, historian Alvin Josephy, in his book Nez Perce Country, reports: “His duties were to arbitrate disputes, act as spokesman, oversee the well-being of the villagers, and provide an example of outstanding and generous conduct, sharing his wealth with the needy. In return, the people often gave him food, clothing, and other goods, especially for settling arguments.”

At the band level, the Nez Perce had a council made up of the headmen from the various villages as well as other prominent men.

There were two ways of obtaining leadership status at the band level. The first was to gain a reputation as being a generous man by sponsoring feasts and tutelary spirit dances and by distributing goods. The second way was through war exploits. To become a war chief, a warrior had to obtain ten war honors (coups). According to Deward Walker: “The leader of the most powerful village may have had a greater voice than the others, but not as a rule. Instead, at this level, individual war prowess seems to have been more important in determining a leader’s authority, and well-known warriors might come from any of the villages of the band.”

The Nez Perce also had some governmental organization above the band level. Neighboring bands would sometimes be unified into confederacies or composite bands. The largest of these composite bands was found on the upper Clearwater River, centered in the Kamiah Valley. There were also composite bands in the Lapwai area, at the mouth of the Grand Rone River, at the confluence of the Clearwater and Snake Rivers, in the Wallowa Valley, and in the Whitebird area along the Salmon River. The composite bands had no single head chief or permanent council.

The Nez Perce shaman also exerted a great deal of political influence and Deward Walker writes: “In fact, a good argument probably could be made for this being the single most powerful leadership status.”

He goes on to report: “Because of the charismatic character of Nez Perce ability, whether political, economic, or religious, the shaman frequently was thought to be an all-around leader. When compared with the temporary and situationally specific authority exerted by other specialists such as war leaders, hunting, root-digging, and fishing specialists, of the specialists in the care of horses, the authority of the Nez Perce shaman was extensive.”

Overall, political organization among the Nez Perce, as well as other tribes in the Plateau area, is summed up by Kent Nerburn, in his book Chief Joseph and the Flight of the Nez Perce: The Untold Story of an American Tragedy:“No one would presume to tell another how to believe or live, and none could speak for another unless appointed to do so.”

The American government, however, was more comfortable dealing with absolute dictators and therefore attempted to appoint and support this type of leadership in American Indian nations.