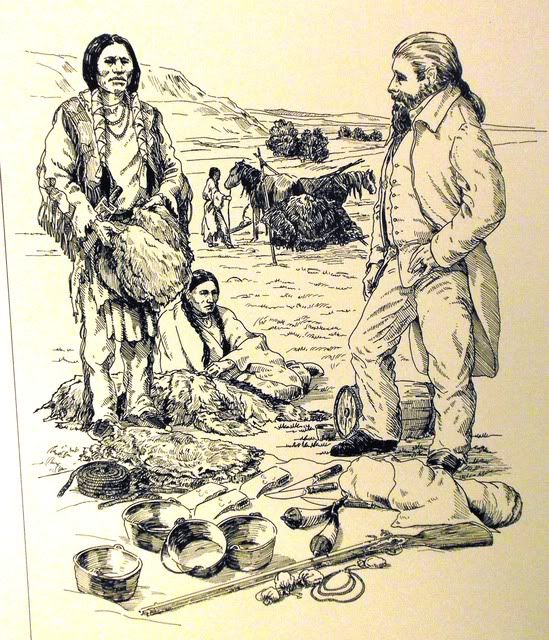 At the beginning of the eighteenth century, Indian nations were interacting with many European nations which had invaded the Americas and had claimed for themselves Indian land. These nations included England, France, Spain, Holland, and Sweden. The century was characterized by European exploration to establish their ownership claims and to search for riches, the establishment of European colonies, and development of the fur trade.

In New Mexico, the Ute and Comanche visited several Spanish settlements. The Spanish feared that the Indians were checking out their defenses. In a preemptive strike, Spanish soldiers attacked a Comanche and Ute village in the San Antonio mountains. Many of the captured Indians were sold as slaves.

In 1680, the Pueblos in New Mexico had revolted against the Spanish and driven them out of the region. Unfortunately, a decade later the Spanish had returned and a number of Tewa fled from their pueblo in New Mexico and sought refuge among the Hopi in Arizona. Here they had established the pueblo of Hano on First Mesa. In 1716, a Spanish army under Governor Felix Martinez invaded the Hopi territories in Arizona in an attempt to make the Tewa refugees return to their pueblos in New Mexico. At First Mesa in Arizona, the Tewa in the village of Hano refused the Spanish request. Feeling that the climb to the top of the mesa to capture the Tewas would be costly, Martinez ordered his soldiers to destroy the Tewa crops and to kill Tewa livestock.

In New Mexico, some of the people who had fled from Jemez Pueblo following the Pueblo Revolt of 1696 returned to the village from Walpi Pueblo in Hopi country.

In Arizona, the Sobaípuri cut their ties with the Hopi with whom they had traded during trade fairs on the San Pedro River.

In Texas, a Spanish missionary party of 75 people, including 6 Querétan missionaries, reached the site of the abandoned Mission of San Francisco de los Texas. Four leagues inland from this site they established the Mission of San Francisco de los Neches. This mission was intended to serve the Neches, Nabedache, Nacogdoches, and Nacono. Eight or nine leagues northeast of the new mission, they also established another mission for the Hainai which was called the Mission of Nuestra Señora de la Purisima Concepción. A third mission, Nuestra Señora de Guadalupe, was established for the Nacogdoche and Nacao. A fourth mission, San José de los Nazones, was established for the Nasoni and Nadaco.

In Alabama, the Spanish government sent agents to the Lower Creek towns in an attempt to entice them to resettle in north Florida. Archaeologist Brent Richards Weisman, in his book Unconquered People: Florida’s Seminole and Miccosukee Indians, reports:

“Spanish timing was perfect: the Lower Creeks were still on the move following their failed attempt to drive the British out of Carolina in the Yamasee War.”

In Mississippi, the French, in retaliation for the killing of four traders, sent a force against the Natchez. The French demanded that the Natchez give them the heads of those responsible for the deaths of the traders. Natchez leader Petit Soleil returned with only three heads. The French then killed four Natchez hostages.

English colonists in South Carolina, with their allies the Cherokee and the Creek, attacked the Yamasee.

In Massachusetts, the Nantucket complained to the General Court about the injustice and oppression which they suffered from their English neighbors. They asked that the island be placed in another county so that their legal conflicts with the English could be heard elsewhere. The Court responded by having two judges on the mainland hear their disputes.