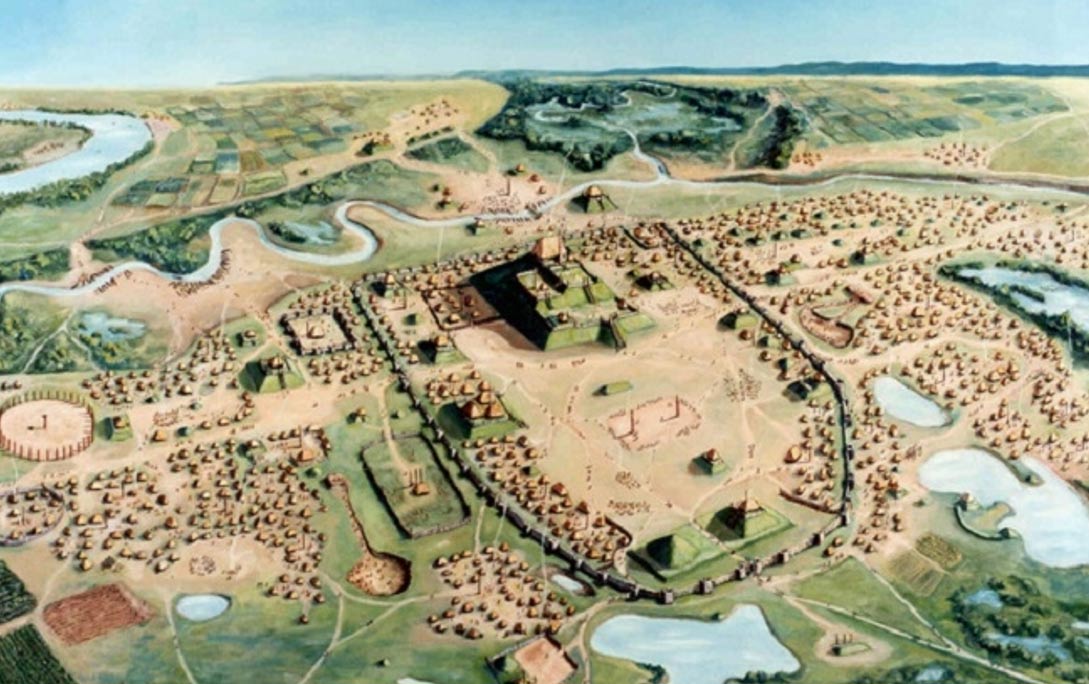 The ancient city of Cahokia was originally founded about 600 CE and its time of greatest development appears to have been between 1050 and 1250. Conservative estimates say that Cahokia had a population of 10,000, but there are some who feel that its population may have been closer to 75,000.

The most spectacular feature of this city is Monk’s Mound which was completed in 1050. This earthen pyramid is 1,800 feet long, 710 feet wide, and 100 feet high. It covers 14 acres. The structure which was on top of the pyramid was 100 feet long and 50 feet high.

Cahokia served as the cultural, economic, and political center of a much larger area. It is generally seen at the center of Mississippian culture which extended from Florida in the south to Wisconsin in the north. Mississippian villages were generally built around large public courtyards.

At about the same time that the Mississippian people of Cahokia completed the construction of Monk’s Mound, another group of Indian people established a small village about ten miles southeast of Cahokia. Located in present-day Illinois, this village today is known as the Halliday site. The village contained 150 houses and storages sheds and was home to 200 to 300 people. The pottery styles in the village appear to be either old-fashioned or foreign to the region. The pottery resembles an earlier pottery type known to archaeologists as Varney Red Filmed, which had been made in southern Missouri at an earlier time period.

Interestingly enough, there are no male-oriented artifacts at the site. There are bone weaving tools, spindle whorls, and ample evidence of intensive farming, pottery production, and communal cooking. There are, however, no arrowheads or evidence of large game animals.

“These upland villagers, living at the edge of the Illinois prairie, were eating small lizards, frogs, snakes, turtles, and rodents, as well as large amounts of corn, possibly more than anybody else in the area at the time—probably cooked as soup, judging from the residues found in pots. They were also eating their dogs, which was not a common practice at Cahokia.”

With regard to their diet, Timothy Pauketat notes:

“They ate more corn and less protein than is healthy for a person. What protein they did eat was far from choice bits of meat, and the existence of these near-peasant farmers was far from ideal, even for the time.”

Who were these people? Timothy Pauketat answers:

“They were immigrants, or the children of immigrants, from southeastern Missouri or northeastern Arkansas, and they were heavily into chunkey.”

Chunkey is a game which was commonly played by the Southeastern Indians, such as the Creeks. The game appears to have originated among the Mississippian peoples of Cahokia. Anthropologist Timothy Pauketat writes:

“The game called Chunkey appears to have played a significant role in organizing social and political life in Cahokia.”

The game involved the use of a stone discoid which was rolled on its edge across a packed-clay playing field. Timothy Pauketat describes what happens next:

“A few paces into the yard the players, at about the same time, chuck their playing sticks like huge darts after the rolling stone. Points were scored depending on how close to the stone the sticks—or, actually, a series of marks on leather bands on each stick—landed.”

At the time the Halliday site was established, the people at Cahokia had begun making some fine chunkey stones which replaced the older, thicker, community-owned stones.