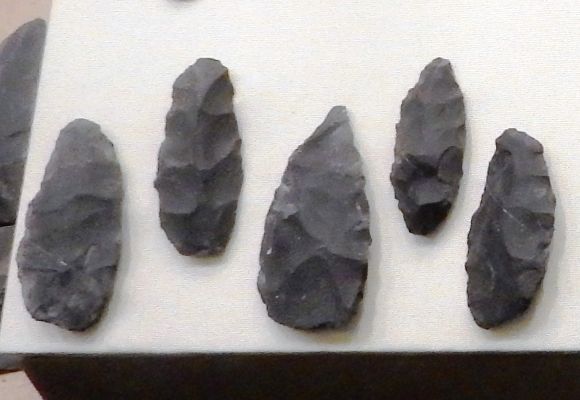 Like human beings everywhere, Indians used stone as their primary material for toolmaking for thousands of years. At the time of the European arrival on this continent, Indians, unlike Europeans, were still using a wide variety of stone tools.

Stone tools are neither crude nor inefficient. A blade knapped from obsidian, for example, is sharper than a surgical scalpel and some surgeons use obsidian blades in doing surgery. However, stone blades tend to dull quickly. On the other hand, the sharpness of the blade can be quickly renewed.

One important thing to understand about stone tools is that not all stone can be used in tool-making. In flintknapping, Indian people needed stones that would break in a predictable fashion and would provide a sharp edge. Albert Goodyear, in his monograph A Hypothesis for the Use of Cryptochrystalline Raw Materials Among Paleo-Indian Groups of North America, reports:  “It is a general geological fact in most places of North America and probably throughout the world that lithic raw materials of even minimal suitability for flaking do not occur evenly over the earth’s surface. In fact, some environments such as coastal plains and alluvial valleys have no lithic raw materials whatsoever.”

Writing in 1897, archaeologist Thomas Wilson, in his book Arrowpoints, Spearheads, and Knives of Prehistoric Times, puts it this way:  “As all arrowpoints, spearpoints, and knives, except a few of siate, were chipped or flaked into shape and used in that condition, the prehistoric man would naturally seek a material which had the requisites for such working.”

Such material includes obsidian, flint, jasper, quartz, and quartzite. Thus, for thousands of years Native Americans operated quarries to obtain the stone needed for toolmaking. In her article “Tools from the Earth,” in American Indian Places: A Historical Guidebook, Catherine Cameron writes:  “Their quarries were most often simply gravel terraces or rocky streambeds, where they could easily collect pebbles or cobbles, test them for quality, and then fashion them into tools. But they also constructed complex mines with holes, pits, shafts, and tunnels; the debris included tons of broken rock and large stone hammers and hammerstones for rough shaping.”

Some of the larger quarry areas are described below.

Yellowstone National Park was the source for obsidian which was widely traded. Obsidian from Yellowstone can be found in sites such as Cahokia in Illinois.

Flint Ridge, located in Licking County, Ohio, has a flint bed some 10 to 20 feet beneath the surface. Indian miners would dig pits to get at the flint. Thomas Wilson reports:  “This is probably the most extensive and best known of all prehistoric flint quarries in the United States.”

Michael Durham, in his book Guide to Ancient Native American Sites, writes:  “The translucent flint of various colors is of a quality unmatched in the east. In prehistoric times it was a valuable trade item and samples have been found as far away as Louisiana, the Atlantic Coast, and Kansas City.”

Big Obsidian Flow in the present-day Newberry Volcanic National Monument in Oregon was an important source of obsidian, a volcanic glass from which very sharp tools could be made. Large chunks of obsidian could be easily broken off from this ancient volcanic flow. Trade routes carried the obsidian from this site into the Northwest Coast and into California.

In central-eastern Wyoming there were numerous small quarries. One of the larger ones was located about 50 miles east of present-day Badger and was worked to a depth of about 20 feet. Indians working at this quarry did some tunneling.

Glass Mountain in northern California supplied obsidian to many different tribes. In Ancient Tribes of the Klamath Country Carrol Howe reports:  “Evidence indicates that the arrow makers and traders sat around the base of the cliff to chip large flakes or spalls from the glassy stone. These they shaped into large, crude blades called ‘blanks.’”  The blanks were easier to transport and could be then fashioned into the stylized points of the different tribes.

The Coso volcanic field in eastern California was a major site for stone, particularly obsidian, for tool making. In Prehistoric Use of the Coso Volcanic Field Amy Gilreath and William Hildebrandt report:  “The sheer quantity of chipping debris and discarded items found at the major obsidian quarries in eastern California has led many to conclude that production far exceeded the needs of resident populations.”

Tools made from Coso obsidian are found throughout the southern half of California, from Monterey Bay in the north, to the Colorado River in the east, to the Pacific Ocean in the west.

In Florida, Indian people quarried blue flint from the Trouble Creek area which they used in making arrow points and spear points.

Wyandotte Cave served as a flint mine and  tool-making workshop in Indiana.

Alibates Flint is found in layers on a ridge above the Canadian River north of present-day Amarillo, Texas. This flint holds a sharp edge and was widely traded on the Great Plains. Today the Alibates Flint Quarries National Monument includes more than 730 large quarry pits. Mining began here more than 10,000 years ago. In Ancient Ruins of the Southwest: An Archaeological Guide, David Noble writes:  “Besides its fine flaking qualities and hardness, Alibates flint had another characteristic that made it a popular tool-making material: its rainbow colors.” Alibates flint was used by both Clovis and Folsom hunters.

Trade networks distributed both stones and stone artifacts over long distances. Writing about the Northwest Coast in Stone, Bone, Antler and Shell: Artifacts of the Northwest Coast , Hilary Stewart reports:  “Craftsmen might go far afield to obtain a particular type of stone or trade with another village or nation for the raw material or even the finished implement.”

Stone quarries and the trading networks for distributing the stones remained important features of American Indian cultures and economic systems until the fur and hide trade made metal goods from Europe more plentiful.