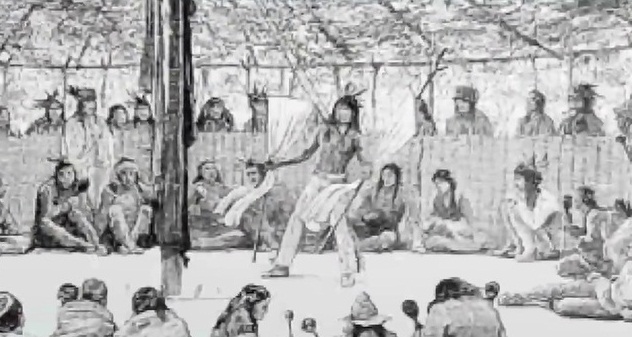 When the European nations began their invasion of the Americas, they assumed that there was only one natural way for a people to be governed: a monarchy. Since most American Indian nations didn’t have monarchies, the Europeans simply invented the idea that a “chief” ruled over a “tribe” in a manner similar to that of a European monarch. While the United States rejected the concept of monarchy for its own government, it continued to insist that Indian “tribes” were somehow ruled by “chiefs” who acted like monarchs. As a result, there are many people today, including American Indian people, who are not aware that “tribes” and “chiefs” are not aboriginal concepts.

On the Northern Plains, along the eastern edge of the Rocky Mountains in what is now the U.S. state of Montana and the Canadian province of Alberta, the Blackfoot Nation (sometimes called the Blackfoot Confederacy) was composed of three or four large groups who shared the same language, and many of the same ceremonies, but maintained their political independence. These groups included the Siksika (also called Northern Blackfoot), Kainah (also called Blood), and the Pikuni (also called Piegan or Peigan). The Pikuni are currently divided into South Piegan (located in Montana on the Blackfeet Reservation) and North Peigan (located in Alberta). Each of these four groups—Siksika, Kainah, North Peigan, and South Piegan—was composed of many small groups commonly called bands.

Like other Northern Plains Indian nations, the Blackfoot had an economy that was organized around bison hunting. Blackfoot political organization was, therefore, formed around communal buffalo hunting. The band was the primary hunting unit and each band was politically autonomous.

Prior to the horse, bands among the buffalo-hunting tribes tended to be small – perhaps 20-30 related families with a total population of 100-200 people. According to anthropologist John Ewers in his book The Blackfeet: Raiders on the Northwestern Plains:  “These bands were large enough to enable their members to encircle a small herd of buffalo on the prairies and large enough to offer a stiff defense against human enemies; yet they were small enough to permit survival during periods of game scarcity and limited rations.”

Each band had its own chief, usually a man. The position of chief was not hereditary, but a son could succeed his father if he distinguished himself with leadership qualities, including bravery and generosity. Chiefs were not autocratic, that is, they could not tell people what to do, but led through the power of persuasion.

Among the Blackfoot, the band chief was responsible for preserving peace in the group. This meant that the band chief would arbitrate conflicts and disputes which arose in daily life. One of the important aspects of social control in the band was ridicule: in cases of mild misconduct, ridicule was very effective in shaming the offender into changing behavior.

During the summer many of the bands would gather together for a joint encampment which might last as long as two weeks. During this time there would usually be a Sun Dance and the chiefs might gather in council. At this time, the most influential band chief would be recognized as the head chief of the tribe. However, the only time when this rank had any significance was during the summer encampment. At this time, the role of tribal chief was really as chairman of the council of chiefs rather than as a ruler.

One of the important characteristic of Blackfoot leadership was generosity which was often expressed in the give-away– an activity condemned by Christian missionaries and the United States government. The give-aways were – and still are — formal events at which one is expected to give away property to other people. Chiefs were expected to give away most of their property.

Since the primary power of a Blackfoot chief lay in the ability to persuade people, one of the important chiefly qualities was oratory. Chiefs had a reputation of speaking well and telling only the truth. Historian John C. Jackson, in his book The Piikani Blackfeet: A Culture Under Siege, describes the leadership qualities esteemed by the Blackfoot:  “Standing tall, speaking straight, exuding dignity and unshakable self-confidence were the attributes that won respect.”

In addition to generosity, Blackfoot leaders were expected to be experienced warriors with a reputation for bravery in battle. War honors were recorded as counting coup—doing things like taking a weapon from a live enemy, capturing a horse from within an enemy camp, and so on. Killing was not necessarily a form of counting coup. Anthropologist Hugh Dempsey, in one of his articles in the Handbook of North American Indians, writes:  “Generally, a band leader had an outstanding record of success in warfare and was regarded as generous to the poor in his distribution of war booty or inherited wealth.”  Howard Harrod, in his book Mission Among the Blackfeet, puts it this way:  “Without an impressive war record, as well as a history of philanthropy, no man could hope to become a band chief.”