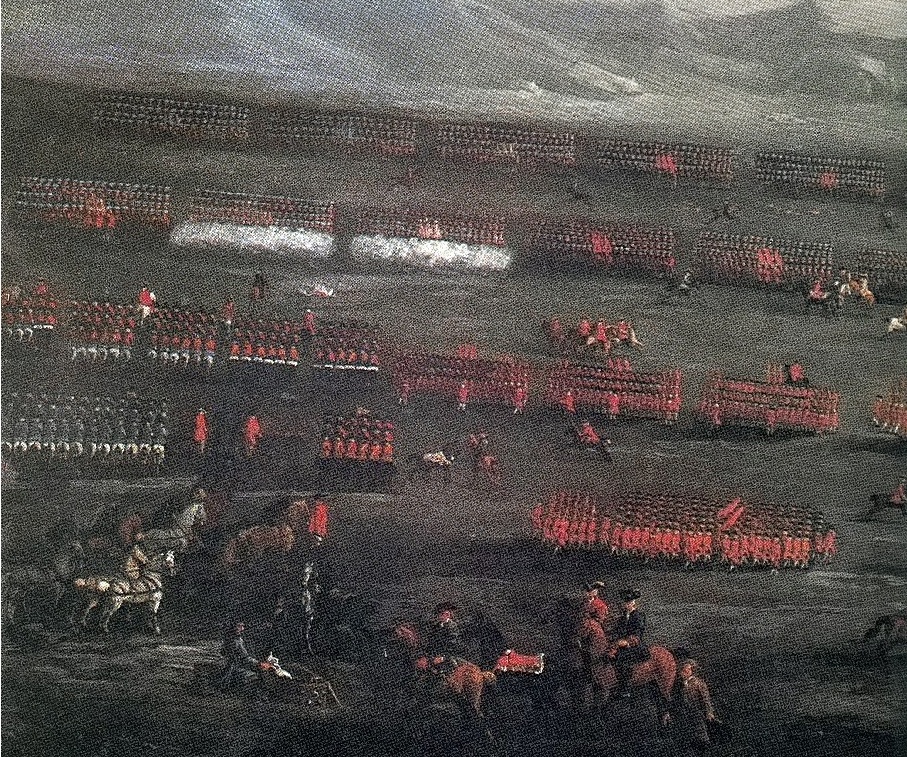 In the north, in what is today Canada, the French were focused on fostering trade relations. The French were also seeking to find out if there was an inland sea which led to the Pacific Ocean.

While the French viewed Indians are trading partners, the English tended to view them as a hindrance to development. In general English colonial policies focused on: (1) strict segregation so that Indians and colonists did not intermingle, (2) genocide, and (3) the use of a “divide and conquer” strategy to get Indian nations to wage war on one another.

In the southwest, the Spanish missionary program was designed to bring about the total conversion of the Indians: to change them from pagans into Christians and from Indians into tax-paying Spanish citizens.

Briefly described below are some of the Indian events of 1715. It is not meant to be comprehensive.

The Yamasee War, which broke out in 1715, has been described elsewhere and is, therefore, not included in these events.

In the Carolinas, the English colonists now held about 1,850 Indian slaves. Since 1680, British slavers had taken between 24,000 and 51,000 war captives, most of whom were shipped as slaves to New England or to the Caribbean.

In South Carolina, the English colonial governor had a census prepared which described the Indian nations which were considered to be subject to the South Carolina government. The census was based on the observations of traders and travelers and the figures in the census did not represent casual or unconcerned estimates.

In Massachusetts, the New England Company asked the Natick to sell them the apparently abandoned praying town of Magunkaquog. The Company proposed to rent out the land to English settlers and share the rent money with the Natick families. The Natick, however, were still growing crops in the area and had deep emotional feelings about the area. Magunkaquog means the “place of the giant trees” in reference to the great trees – oak and chestnut – which were found in abundance in the area.

After initially rejecting the offer, the Natick agreed to the deal. After signing the deed, one of the signatories, Isaac Nehemiah, commited suicide by hanging himself with his belt. According to historian Daniel Mandell, in his book Behind the Frontier: Indians in Eighteenth-Century Eastern Massachusetts:  “Nehemiah’s suicide highlighted how some Indians ‘passively’ resisted the sale of their lands to colonists, as well as the emotional attachment that many Natick Indians still held to Magunkaquog.”

In South Carolina, the Cherokee united with the Chickasaw to drive the Shawnee out of the Cumberland River valley to an area beyond the Ohio River. This opened up the Cumberland area for Cherokee and Chickasaw fishing and hunting.

In Alabama, the Creek began to trade some of their deerskins with the French.

In Alabama, a French diplomat described the Creek leader Brims:  “No one has ever been able to make him take sides with one of the three European nations who know him, he alleging that he wishes to see every one, to be neutral, and not to espouse any of the quarrels which the French, English, and Spaniards have with one another.”  All of the European nations gave him presents hoping to win him to their side.

In Mississippi, a French party going down the Mississippi River refused to stop and smoke the pipe with the Natchez. Interpreting this insult as a sign of hostility, the Natchez killed four French traders and plundered the local French warehouse.

In Texas, the Spanish decided to re-occupy east Texas and established four missions among the Indians.

In Texas, the Comanche absorbed and/or annihilated the Jumano and the tribe vanishes from the historical record.

The French legalized the Coureurs de Bois. Coureurs de bois is sometimes translated into English as “wood rangers”. Writing in 1851 and with a strong anti-French, anti-Indian bias in his book The Conspiracy of Pontiac and the Indian War After the Conquest of Canada, Francis Parkman describes the coureurs de bois as–“half-civilized vagrants, whose chief vocation was conducting the canoes of the traders along the lakes and rivers of the interior; many of them, however, shaking loose every tie of blood and kindred, identified themselves with the Indians, and sank into utter barbarism.”

These traders frequently married with Indian women (primarily Ojibwa and Cree) and the result was the creation of a new group known as the Métis.

In the Northwest Territories, Governor James Knight sent a group out from the York Factory to establish peace with the Chipewyan and bring them back to trade. The group, under the leadership of William Stuart, was guided by Thanadelthur, a Chipewyan woman who had been captured by the Cree.  Richard Ruggles, in his chapter in North American Exploration. Volume 2: A Continent Defined, reports:  “Her task was to guide the group to her home region and to act as interpreter and intermediary with her people.”

The group started out with about a dozen Cree, but this soon increased to about 150. Their first contact with the Chipewyan was a camp which had been attacked by Cree warriors. Stuart’s Cree wanted to return east as they feared an attack by the Chipewyan, but Thanadelthur persuaded them to wait for ten days while she contacted her people.

Thanadelthur returned with a party of about 160 Chipewyan and a council was held with the Cree. The two groups agreed to maintain the peace. The Chipewyan also agreed to trade with the Hudson’s Bay Company and to allow ten young men to accompany Stuart back to the York factory. The young men were to learn Cree so that they could act as interpreters and guides.

Cree leader Captain Swan (Waupisoo) left the York Factory to establish contact with the Athabascans for the Hudson’s Bay Company.

Indians as People Under the Law