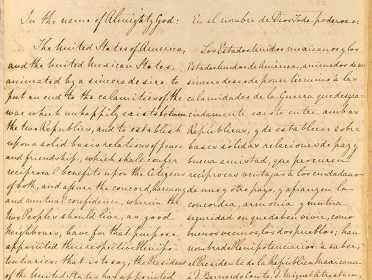 While Mexico declared its independence from Spain on September 16, 1810, it did not actually obtain its independence until September 27, 1821. In the Plan de Iguala, Mexico did away with all legal distinctions regarding Indians and reaffirmed that Indians were citizens of Mexico on an equal basis with non-Indians. In other words, Mexico, unlike the United States, gave Indians full citizenship and recognized that Indians had rights to their land.

In the newly established country of Mexico, Spanish policies were blamed for Indian poverty and many felt that by erasing racial, caste, and class distinctions that Spain’s legacy of paternalism could be rectified. According to Daniel Tyler, in an article in the New Mexico Historical Review:  “Even the word ‘Indian’ was supposed to be abolished on public and private documents.”  The Catholic Church, however, opposed equality and advocated a return to the colonial mission system. In reality, each state determined for itself how to incorporate Indians into the new nation.

In 1848, the United States ended its war with Mexico with the Treaty of Guadalupe Hidalgo. In this treaty, Mexico gave the United States what is now the Southwest. One newspaper reported: “we take nothing by conquest…Thank God.”

Navajo historian Jennifer Denetdale, in an article in the New Mexico Historical Review, writes:  “Ironically, the American rationale for claiming these lands was to bring peace and stability to the region, but the United State only escalated the cycles of violence among Navajos, other Native peoples, and New Mexicans.”

As with many of its treaties, the United States tended to ignore any provisions which might be inconvenient. American Indian policy at this time was focused on removing Indians from their lands and confining them to reservations on lands considered to be unsuitable for agricultural and mineral development.

With the Treaty of Guadalupe Hidalgo, the United States acquired what would become New Mexico and Arizona. Included in this territory were the Pueblo Indians who were agricultural peoples who lived in permanent villages. The Pueblos did not fit the established American stereotypes about Indians. In Santa Ana: The People, the Pueblo, and the History of Tamaya Laura Bayer writes:  “They had preserved their own ancient governments, traditions, and religions after three hundred years of contact with European civilization, and they clearly indicated their intention to continue to do so.”

The Pueblos were clearly sovereign entities who had developed the land. American Indian policies did not seem to fit the Pueblo situations. Under Mexican law, Pueblo Indians had been citizens, but under American law their lost their citizenship rights. Some people argued that the Pueblos should be given citizenship, while others felt that they should be considered to be corporate entities under territorial law. It was not clear legally if they should be considered to be “Indians” or not.

In 1850, James S. Calhoun, the first Indian agent in New Mexico, negotiated a treaty between the United States and the Pueblos of Santa Clara, Tesuque, Nambe, Santo Domingo, Jemez, San Felipe, Cochiti, San Ildefonso, Santa Ana, and Zia. The treaty states that the boundaries of each Pueblo  “shall never be diminished, but may be enlarged whenever the Government of the United States shall deem it advisable.”  In addition, the treaty states that the Pueblos shall be governed by their own laws and customs. On the surface, the treaty seem to be in accord with the Treaty of Guadalupe Hidalgo, but the treaty was never ratified by the United States Senate.

Under the Treaty of Guadalupe Hidalgo, the United States also acquired California, an area which had been densely populated prior to the arrival of the Spanish. Under the Spanish mission system Indian population had declined.

In 1850, Congress authorized the President to appoint negotiators to make treaties with the California Indians. Van Hastings Garner reports:  “These treaties were to set up reservations for Indians into which they could retreat from the encroachment of white settlers.  The price for this security, however, was the surrender of all claims to land not included in the reservations.”  In other words, the Indians were to give up all of the rights which had been reserved to them in the Treaty of Guadalupe Hidalgo with Mexico.

In 1851, the United States formally negotiated 18 treaties with Indian nations which secured legal title to public land and which guaranteed reserved lands for Indians. The treaties were signed by about 400 Indian chiefs and leaders representing 150 tribes (about half the tribes in California). The Indian commissioners explained to the non-Indian residents of the state that the government had two options: to exterminate the Indians or to “domesticate” them. They argued that “domesticating” them was more practical.

None of the commissioners who arranged the California treaties knew anything about California Indians. According to anthropologist Robert Heizer, in the Handbook of North American Indians:  “Their procedure was to travel about until they could collect enough natives, meet with them, and effect the treaty explanation and signing. One wonders how clearly many Indians understood what the whole matter was about.”

Non-Indians in California fiercely opposed the ratification of the treaties. While these treaties were signed by both Indian and U.S. government leaders, they were not debated in Congress, thus did not appear in the Congressional Record, and stayed hidden for more than 50 years. The ratification of the treaties was opposed by the California legislature and Annette Jaimes, in a chapter in Critical Issues in Native North America, reports  “it is rumored that state representatives even succeeded in having the treaties hidden in the archives of the Government Room in Washington, D.C.”

In spite of the assurances given to Mexico by the United States in the Treaty of Guadalupe Hidalgo, ensuing legislation deprived California Indians of the rights to their land. The impact on the Indians was immense: many lost their homes, and were persecuted and hunted by non-Indians. During the next 50 years, California Indian population decreased by 80%. In the Handbook of North American Indians, anthropologist Omer Stewart writes:  “The failure to ratify the treaties left the federal government without explicit legal obligation toward the Indians of California.”

In 1851, a number of California Indians were living on land grants issued to them by Spain and Mexico. As non-Indian greed turned to dispossessing these Indians of their lands, Congress passed a law to establish a commission to determine the validity of these land grants. While on the surface it looked like the commission should confirm Indian land rights under these grants, it actually served to do the opposite. Van Hastings Garner explains it this way:  “The law stipulated that no matter how secure the title to the land was, if the grant holder failed to appear before the commission, the grant would revert to public domain. This provision took away the rights of most Indian grant holders, few of whom were told of the commission’s existence, let alone that they had to appear before it.”  In addition, the Indians had to travel to San Francisco to appear before the commission. Only six Indian claims were confirmed.

The American Indian experiences in New Mexico and California with American government promises made to Mexico in the Treaty of Guadalupe Hidalgo suggest that treaty promises are not held in high regard by the United States.