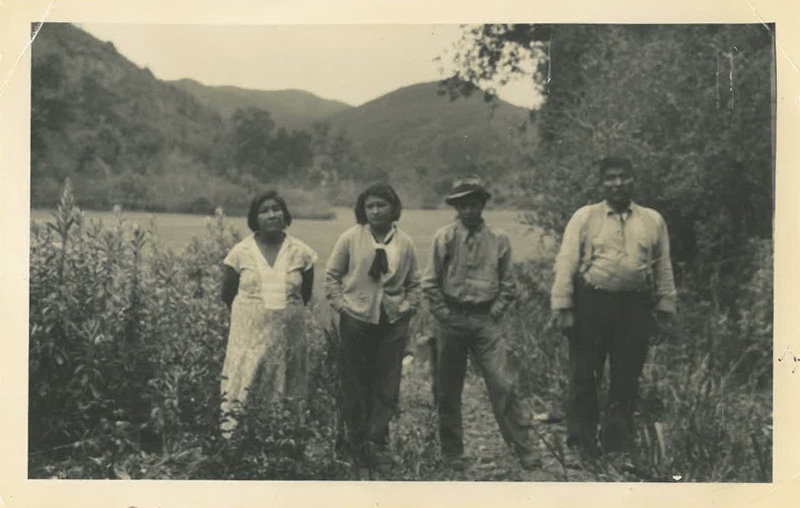 The United States acquired what would become the state of California under the 1848 Treaty of Guadalupe Hidalgo which ended the war with Mexico. In the treaty, the United States agreed to recognize Indian land holdings, and to allow Indian people to continue their customs and languages.

In 1901, the Supreme Court in the case Barker versus Harvey decided that the Cupeño did not have the right to retain their homes at Warner’s Hot Springs in California. The Indians had argued that the Treaty of Guadalupe Hidalgo with Mexico recognized the Indian right to villages on Mexican land grants. The Supreme Court, however, decided that the Indians had failed to bring their case to the Land Commission in the allotted time and that the Bureau of Indian Affairs had failed to bring about legislation to reaffirm the land rights for these Indians.

In 1851, Congress had established a Board of Land Commissioners to investigate all land claims in California. While the Commissioners were to have submitted a report to the Secretary of the Interior, no one has been able to find the report. In an article in the Journal of the West, Joel Hyer reports:

“Without confirming evidence, the Supreme Court believed that the Board of Land Commissioners informed all Indians—including those living in the isolated mountain communities at Warner’s Ranch—of the necessity of presenting land claims within two years.”

“The Court based its decision on a supposition that someone visited these peoples, informed of their duty to file a land claim, and then made a report.”

The land in question actually belonged to the Mission San Diego which had reported them to be abandoned.

The Supreme Court decision affected 250 Cupeño families. Anthropologist Edward Castillo, in one of his entries in the Handbook of North American Indians, reports:

“At several villages native families locked themselves in their homes as sheriff’s deputies broke down their doors with axes to evict them.”

Many influential California Anglos were sympathetic to the cause of the Cupeño and other Mission Indians. In 1902, the Sequoyah League was organized by writer Charles Fletcher Lummis. The goal of the new organization was “To Make Better Indians” and one of the primary concerns was the Mission Indians. Historian William Hagan, in his book Theodore Roosevelt and Six Friends of the Indian, reports:

“The fifty-odd people who attended the organization meeting including Episcopal and Catholic bishops from the area.”

Charles Lummis, who had worked with the Indian Rights Association, hoped that the new organization would not be adversarial, but would work with the government. Historian Sherry Smith, in her book Reimagining Indians: Native Americans Through Ango Eyes, 1880-1940, reports:

“Beyond addressing the needs of California’s Indians, the League intended to cooperate with the Indian Bureau while maintaining ‘a friendly watchfulness over’ reservations.”

While the League favored assimilation, it rejected allotment as the primary vehicle to accomplish this. Only one Indian was on the League’s board of directors: Francis LaFlesche (Omaha) who lived in Washington, D.C. According to Sherry Smith:

“In assuming Anglos were best qualified to direct Indian affairs, the Sequoyah League marched in step with other Indian reform groups of its time.”

In 1902, in an issue of Out West, Charles Lummis launched a campaign to help the Cupeño families who were being evicted from Warner Ranch. Lummis also denounced the directive from the Commissioner of Indian Affairs which specifies the proper length of an adult male Indian’s hair.

The Indian interest groups, such as the Sequoyah League, had an impact. They forced Congress to bow to public opinion and purchase a ranch in California’s Pala Valley for the Cupeño who had been evicted from the Mission San Diego land grant.

In 1903, government officials met with the Cupeño on Warner’s Ranch to inform them that they were to be moved to the Pala Reservation. In trying to explain why they don’t want to move, Cecilio Blacktooth told the officials:

“You see that graveyard out there? There are our fathers and our grandfathers. You see that Eagle-nest mountain and that Rabbit-hole mountain? When God made them, He gave us this place. We have always been here. We do not care for any other place.”

In spite of this plea, the Cupeños were removed.