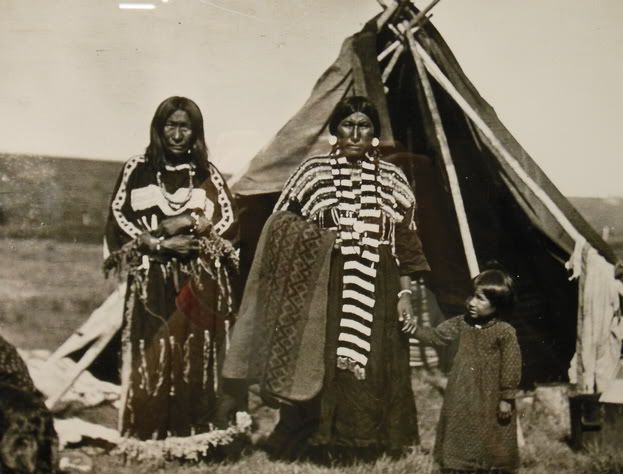 By the time fur traders from the Hudson’s Bay Company first made contact with the Blackfoot tribes in 1735, their territory included much of the Northern Plains of present-day Alberta, Saskatchewan, and Montana. There are three Blackfoot tribes: Pikuni (also called Piegan), Kainah (also called Blood), Siksika (also called Northern Blackfoot). The Piegan are currently divided into South Piegan (located in Montana) and North Peigan (located in Alberta). These tribes, while politically independent, shared the same language and many of the same ceremonies.

One of the common accounts of Blackfoot origins often given by non-Indians is that they had been woodland dwellers who entered the Plains and adopted a Plains buffalo-hunting lifestyle just prior to European contact in the eighteenth century. On the other hand, anthropologist Hugh Dempsey, in his chapter on the Blackfoot in the Handbook of North American Indians, writes:  “The belief that they were woodland dwellers who drifted onto the plains from the region of the Eagle Hills in Saskatchewan in the immediate precontact period has been rejected by Indians and some anthropologists.”

Since Blackfoot culture shows almost no influence from the woodland cultures to the northeast, it is generally felt today that the Blackfoot had lived on the Northern Plains for a very long time prior to their contact with the fur traders.

For the Blackfoot, as well as other Plains Indian tribes, there were places which were regarded as particularly sacred. These sacred places were not marked with structures or shrines, but were usually places on the landscape which served as portals to the spiritual world. Some of these sacred places were used for ceremonies, such as the Medicine Lodge (Sun Dance), vision quest, and sweat lodge. Others were places where sacred plants could be gathered. Many of the sites are mentioned in the tribal oral traditions and therefore tend to be invisible for those unfamiliar with these traditions.

A few of the places which are sacred to the Blackfoot are described below.

Chief Mountain is located to the east of Glacier National Park, Montana. It is used as a vision quest and prayer site. The Blackfoot name for the mountain is Niinastoko which means “Father Mountain.” According to Blackfoot elder Long Standing Bear Chief, writing in Spirit Talk News:   “On Chief Mountain, or rather Father Mountain, the Great Holy Being called upon the spirits of the universe to meet and decide what they were to offer in order to make life meaningful to the newest form of life: mankind.”  He goes on to say:  “When you go to the base of Chief Mountain today, you will find cloth of many different colors tied to the trees as offerings to the Source of Life and to the Spirits who continue to contribute to the wellness of mankind.”

Another area sacred to the Blackfoot is Badger-Two Medicine, an area near the Blackfeet Reservation in Montana. It is an area which contains hundreds of features which are associated with Blackfoot oral tradition and creation. According to Arlene Hirschfelder and Paulette Molin, in The Encyclopedia of Native American Religions:  “For centuries, the Blackfeet have carried out practices in this sacred region that are vital to the Blackfeet culture and people.”

In an article in The Journal of Law and Religion, Jay Vest writes:  “Spiritually, the Badger-Two Medicine is a source for the gathering of traditional Blackfeet ‘medicine power’ and this quality has a significant role in restoring the moral fabric of the Blackfeet Nation.”

The area is endangered by oil and gas exploration which the elders feel will destroy the region’s spirituality.

The Sweetgrass Hills is an area in Montana which is sacred to the Blackfoot, Gros Ventre, Chippewa-Cree, Kootenai, and Assiniboine. The area is used as a fasting area and ceremonial area. The National Trust for Historic Preservation has placed the Sweetgrass Hills on its list of ten most endangered places. The area is managed by the Bureau of Land Management and there have been attempts to explore the area for gold, oil, and gas.

Writing-on-Stone is now a provincial park in Alberta, Canada which is well-known for its large collection of traditional rock art. Along a seven kilometer stretch of the Milk River, sandstone outcrops have been used for petroglyphs (rock carvings). Among the Blackfoot, this place is known as the “place of mystery” and the place “where the ghosts live”. According to Blackfoot elders Bird Rattle and Split Ears, the writings are messages from the spirit world which can be read by medicine men. According to these elders, the messages “which frequently changed overnight, warned of enemies in the area, told them the location of the buffalo herds or strayed horses, and foretold future events.”

Tribes Ask That Oil and Gas Leases be Cancelled