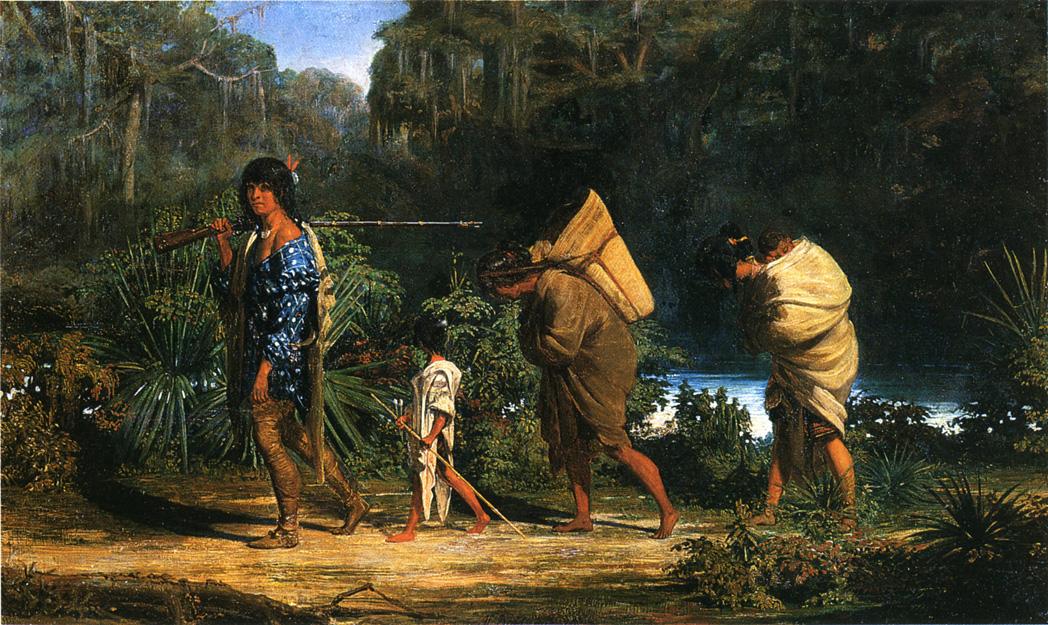 The Choctaw, at the time of European contact, were a loosely organized confederacy composed of three distinctly different divisions: Okla Falaya (Long People), Okla Tannap (People of the Opposite Side), and Okla Hannalia (Sixtown People). The people were living in more than 100 autonomous villages.

While the Choctaw, like the other Indian nations in Eastern North America, were sedentary farmers, they also have traditions which tell of times when they lived elsewhere. Choctaw oral tradition speaks of a time when they had lived to the northwest. However, their population increased and the game grew scarce which forced them to seek a new home.

Their migration was led by Chahta (also spelled Chah-tah) who carried a magical staff. Each night when they camped, he would place the staff upright into the ground. In the morning, he would inspect it and then he would lead the people in the direction in which the staff leaned. At the ancient mound of Ninih Waiya (“Leaning Mountain”) near present-day Philadelphia, Mississippi, the staff remained upright in the morning. Thus it was here that the Choctaw settled. It was in this country that the Choctaw established their government.

According to one version of the story, a group of people led by Chikasa, Chahta’s brother, had camped on the other side of the creek. There was a heavy rain and flooding, following which the staff was still upright indicating that this is where the people were to stay. However, Chikasa’s party had proceeded on, not knowing that the promised land had been found. Arthur DeRosier (1970: 7) writes:

“Many Choctaws maintained that this was how they and the Chickasaws became separate, though kindred, nations.”

The Choctaw migration story tells that the people traveled for 43 years and that during this migration they carried the bones of the ancestors. Choctaw historian Donna Akers (1999: 67) writes:

“Many of the people carried so many bones that they were unable to carry anything else. Some were so overloaded that they would carry one load forward a half day’s journey, deposit it, and then return for the remainder.”

The task of carrying the bones was a sacred duty.

Another variation of the story tells that the Choctaw were the first to settle near Ninih Waiya following their migration. After a while, however, there were some internal disputes and some of the younger warriors and hunters abandoned the people to settle in distant regions. Tom Mould (2003: 115) writes:

“Thus, from the body of the Choctaw nation had sprung those other nations which are known as the Chickasaws, the Cherokees, the Creeks or Muscogees, the Shawnees, and the Delawares.”

There is also a Choctaw migration story that tells of the people coming from the bosom of a magnificent sea which is considered to be the Gulf of Mexico.