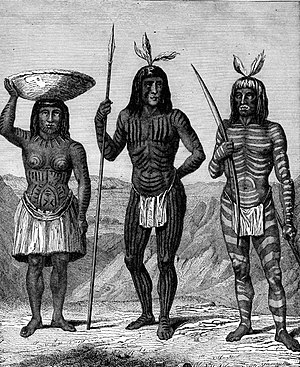 The Mohave are a Yuman-speaking tribe whose traditional homeland was along the Colorado River. The name “Mohave” is a corruption of their native name Aha-makave which means “beside the water.”

The Yuman-speaking people, according to their oral history, were created at Avikwame (now designated as Mount Newberry). It was here that Mastamho (also known as Mustamxo and Kumastamxo) brought forth the different people and sent them to live in the different regions along the Colorado River.

The Mohave grew corn, beans, and cucurbits (gourd family) in the bottomlands along the river. They practiced floodwater agriculture and planted in flooded areas as the floodwaters receded. The rich silt left behind by the floodwaters meant that crop rotation and artificial fertilization were not needed.

The boundaries of Mohave fields, usually an acre or two in size, were marked with ridges of dirt or with arrow weed markers set up along the edges of the field.

Mohave tobacco was known for being strong and bitter. In her book Speaking of Indians With An Accent on the Southwest, Bernice Johnston explains why:

“To make it so, they frowned and scowled as they worked the plots and pretended to fight and quarrel. The result – strong tobacco.”

Fish were an important part of the Mohave diet. Fish were usually taken in dip nets, drag nets, or fish traps. The fish traps were large, canoe-shaped basket scoops with long handles.

The Mohave made at least three distinctive forms of pottery. In making pottery, clay was tempered with crushed sandstone and the vessels were built up with a coiling process. Before firing, the vessels were decorated with a yellow ochre pigment which turned to a dull red when fired. Firing was done over an open wood fire.

The Portland Art Museum features a display of Mohave pottery. According to the display:

“Considered a woman’s art, Mojave craftswomen traditionally made ceramics during the dry season in a location outside of the home.”

Both Mohave men and women wore loincloths. These loincloths were made from willow bark strips made in a checkerboard weave. The upper body was covered only in inclement weather. Both sexes generally went barefoot and bareheaded. However, when traveling they would wear sandals.

With regard to adornment, anthropologist Bertha Dutton, in her book The Ranchería, Ute, and Southern Paiute Peoples: Indians of the American Southwest, writes of the Mohave:

“These people were long famous for the artistic painting of their bodies.”

The Mohave used the bow and arrow for both hunting and warfare. The bow was shaped like a shallow D: it was straight for most of its length with only the ends curving in toward the bowstring. The ideal bow size depended on the man who was using it: the bow should stretch from the ground to the chin. However, hunting bows tended to be somewhat shorter than war bows. Hunting bows were often under four feet in length.

Marriage was not accompanied by a religious ceremony. Anthropologist Kenneth Stewart, in his entry on the Mohave in the Handbook of North American Indians, reports:

“Marriage was simple and without ceremony, and while most marriages were monogamous, divorce was so easy and frequent that there was an approach to serial monogamy.”

Among the Yuman-speaking groups, only the Mohave had a unified central government with a council and headman. Anthropologist Kenneth Stewart notes:

“The Mohave, regardless of place of residence, thought of themselves as one people, living in a true nation with a well-defined territory.”

The Mohave were divided into three bands, and each band was further divided into settlements. Chiefs attained their positions by dreaming of them. They were also expected to be good speakers and to address the people in the morning. According to anthropologist Kenneth Stewart:

“The Mohave had hereditary chiefs in the male line—men of honor and dignity—but their functions are said to have been obscure.”

Warfare among the Mohave was usually carried out by men who had had dreams which gave them power in battle. Men who had not had such dreams could also participate in war. According to the Mojave, warfare was instituted by the culture hero Mastamhó who decreed that in each generation there would be some men who would have dreams giving them power in war. Only warriors who had scalping power given to them in dreams were allowed to remove scalps.

Prior to engaging in war, the entire Mohave war party would undergo 4-8 days of purification ceremonies.

A Mohave war party usually had 10-12 men. An attack on an enemy settlement was usually carried out at dawn to use the element of surprise. War parties would travel several hundred miles to attack enemy villages, such as those of the Pima.

Among the River Yumans, prenatal dreaming was important. Anthropologist Kenneth Stewart, in his chapter on the Yumans in the Handbook of North American Indians, explains:

“the unborn soul of the dreamer was projected back in time to the scene of creation, where power was conferred by the deities.”

The power for success as a warrior, shaman, singer, or chief came from dreams rather than formal training or learning.

The powers or knowledge from particular spirits are different and specific. The power might not come in a single dream, but may be revealed in a series of dreams. In this case, it is not until the spirits tell the person that the preparations are complete can the powers granted in the dream actually be used.

“From these dreams—which to the Mohave are regular visits with their ancestors—come their decisions and their principal motivations.”

Sometimes Jimsonweed is used in order to increase the frequency and intensity of the dreams.