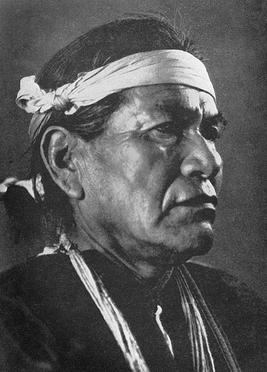 Many Indian cultures accepted – and in fact, celebrated – the fact the some people could fill both male and female roles in their society. One such individual was Hosteen Klah (also spelled Hastiin Klah) who became well-known as a Navajo weaver and as a Navajo singer (medicine man). Among the Navajo, weavers are usually female and hataalii (singers, chanters, or medicine men) are usually male. Hosteen Klah filled both of these roles.

Among the Navajo, Klah was known as a nádleeh which can be translated as “one who is changed” or “one who is transformed.” There are some who feel that Klah was born as a hermaphrodite while others report that he was emasculated in a childhood accident. There are still others who simply say that he sometimes identified himself as a man and at other times as a woman.

In the 1880s, Klah began to learn weaving from his mother and from his sister. He first began to learn the Navajo medicine ways – chanting and sandpainting – from his uncle. In learning the Nightway ceremony, Klah worked under the guidance of Laughing Singer and Tall Chanter. While most Navajo singers can master only one or two complete chants, Klah mastered at least eight. Among the ceremonies which he mastered were the Hailway, the Mountainway, the Nightway, the Windway, and the Chiricahua.

Among the Navajo, the purpose of the chant is to cure the sick. For the chant to work, it must be repeated exactly by the singer. Learning a chant takes a considerable amount of intellectual work: each one is like memorizing hundreds of lines of song or poetry. When a singer contracts to perform a ceremony, he undertakes a great deal of responsibility for not only the patient, but also others who are present at the ceremony.

In 1917, after 24 years of study, Hosteen Klah performed his first Nighway Ceremony (Yeibichai). The nine-day ceremony was perfect in chant, symbol, and ceremony and established him as a great singer.

In 1911 Hosteen Klah wove a blanket of yeibichai dancers which portrayed sacred masks. Local singers felt that this was sacrilegious and demanded that Klah have a ceremony to expel the evil and that he destroy the weaving. Instead, Klah sent the weaving to Washington and experienced no negative effects.

In 1917 Klah took Franc Newcomb, a trader’s wife, to a Nightway ceremony. After the ceremony, she attempted to draw from memory the designs from the sandpaintings which were used in the ceremony. She was unsuccessful and Klah sketched them for her in pencil. Newcomb then made these into watercolor reproductions and hung them in her bedroom so that the other Navajo would not be offended. After seeing that no punishment occurred, Klah then did an additional 27 paintings for her.

In 1919 Klah began to weave sandpainting rugs which were based on the chants he was qualified to sing. His first sandpainting weaving was a whirling log design from the Nightway ceremony.

Klah’s last sandpainting weaving, The Skies from the Shootingway ceremony, was done in 1937 and was not complete at the time of his death. The work was finished by his nieces, Gladys and Irene Manuelito.

Over the years, Klah worked with a number of non-Indian scholars and allowed them to record his songs, ceremonies, stories, and sandpaintings. His only Navajo student – Beaal Begay – died suddenly in 1931 and so much of his knowledge was not passed on in the traditional Navajo way.

One of the Anglos who worked with Klah was Mary Cabot Wheelwright who founded the Museum of Navajo Ceremonial Art in 1937. She had been permitted to record many of Klah’s songs and erected the museum to preserve his medicine knowledge and his sacred objects. The museum is now known as the Wheelwright Museum. Until recently, the Museum displayed many of his drawings and paintings of sandpaintings as well as his sandpainting weavings. However, the Museum has restricted the display and reproduction of these items based on the recommendations of the Navajo Nation Historic Preservation Department’s Traditional Cultural Program Committee.