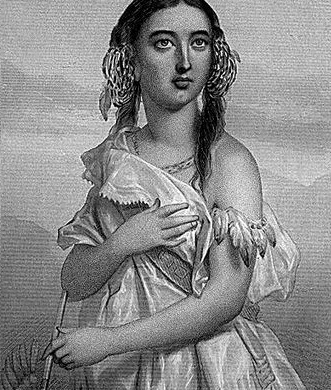 Perhaps the best known Virginia Indian is Pocahontas. Her story has become a myth among non-Indians which perpetuates many common stereotypes and misunderstandings about Indian people in Virginia.

Pocahontas was born about 1596 to an elite family. While she was given the childhood nickname “Pocahontas’ shortly after birth, her clan name was Matoaka. The name “Motoaka” is sometimes translated as “White Feather”. Among Algonquian-speaking people such as the Powhatan, Beloved Women-women who had great spiritual power-wore white feathers to signify their power. Her name, therefore, may be an indication that her clan viewed her as a Beloved Woman.

Matoaka went through her vision-quest and obtained her spiritual power at a fairly young age, perhaps 7 or 8. To obtain her vision, she was taken to a hobbomak, a clearing marked with an arrangement of rocks in an area of great spiritual power. In seeking her dream, she would have been guided by the Council of Women. For a period of time-usually four to seven days-she would have remained within the hobbomak, depriving herself of food and drink, and perhaps sleep.

According to oral tradition, Matoaka saw in her dream the coming of many ships with white sails. She saw the villages of her people shrinking and then disappearing. She saw what appeared to be a large shell midden, but then realized that it was a pile of bones, not shells. She found a quahog shell in her hand which then turned into a three-feathered fan. In her vision, she saw a strange bearded man come ashore.

In 1608, a small party of Englishmen under the leadership of Captain John Smith set out to find the headwaters of the Chickahominy River and to contact the Powhatan, whom they viewed as the “King” of the Powhatan Alliance. Smith was captured by a Pumankey war party.

Smith’s capture came just prior to the great ceremony of Nikomis which celebrated the Woman Who Fell From the Sky. The dates for this celebration were set by star patterns. Thus instead of killing him, the Indians kept him alive in so that he could go through the “death and rebirth” part of this ceremony. Smith, not speaking the language and being totally ignorant of Indian ways, didn’t have a clue about what was happening. All he knew was that he was taken into a great hall where he thought he was about to be killed when a young girl-Matoaka-threw herself across his body and saved him from being beheaded.

Smith expected to be beheaded as this was a common form of execution among the English at this time and the heads of those executed often lined English streets. It was not, however, a form of Indian execution.

From an Indian viewpoint, Smith’s old identity was being killed so that he could be reborn with a new identity: as an adopted clan member. As a Beloved Woman, Matoaka had the power to choose who would be adopted. Her status as a Beloved Woman was evident by the fact that she was adorned in white feathers. Smith was given the new name of Nantaquod.

One of the functions of Beloved Women in the Algonquian-speaking tribes of Virginia was to select which war captives were to be adopted into the clans and which were to be killed. Deciding who was to live and who was to die was a woman’s prerogative.

Smith would later write that he was saved from beheading because the Powhatan, whom he wrongly assumed was the father of Matoaka, doted on her so greatly that granted her wish to save his life. Smith did not understand that he was taking part in the ancient huskanaw ceremony of ritual death and remaking. Nor did he understand that women in the Algonquian-speaking cultures of Virginia had great political power.

During the next year, Matoaka appeared at Jamestown several times. On one occasion, when the English were once again starving due to their inability to grow their own food, she appeared with a dozen or so helpers, bringing them food.

On one occasion in 1609, Matoaka warned John Smith about the potential for an Indian attack. While there are many who see this as evidence of her turning her back on her people, this warning seems to have been deliberately designed and implemented by the Great Council so that she would have the total trust of the English.

From about 1609 to 1612, Matoaka disappeared from the view of the English. During this time she was training in the ways of the midéwiwin, the Great Medicine Society, and was being groomed as a woman of great spiritual and political power.

As an adept in the midéwiwin, she obtained the sacred name Amonute. This name was never revealed to the English.

About 1610, she married Kuocum, a Powhatan warrior and trader, and gave birth to her first child. She was about 14 or 15 years old at this time.

In 1612, the starving English colonists kidnapped Pocahontas and held her for ransom. Their plan was to use her to obtain food from the Powhatan, whom they believed was her father. No ransom, however, was paid.

As with the warning in 1609, it appears that Pocahontas colluded with the English to arrange for her kidnapping. In retrospect, it appears that she was infiltrating English society as a spy. As a captive who was trusted by the English, she was in a position to pass information about the colonists on to her people.

Pocahontas was then taken to the English settlement of Henrico where she was dressed in English clothing so that her bare breasts and tattoos would be covered. She was also instructed in Christian beliefs and baptized. She was given the English name of Rebecca and out of respect for her royal birth she was called Lady Rebecca. She was then married to John Rolfe and in 1615 gave birth to a son who was named Thomas.

In 1617, Lady Rebecca, John Rolfe, and their son Thomas set sail for England. She was also accompanied by several of her tribal members. Her retinue, evidence of her royal status as a “princess”, included about 8 tribal members, none of whom had converted to Christianity. Among those who accompanied her was the priest Uttamatamakin (also known as Tomakin, Tomocomo, Tomo) whose skills as a shaman were highly developed.

In England, Lord and Lady De La Warr (for whom the state of Delaware is named) was appointed to serve as her sponsors. De La Warr was the governor of the Virginia Colony. While in England she attended performances of Twelfth Night and The Tempest. The reports at the time indicate that Lady Rebecca had a good command of English, she dressed attractively, she comported herself with quiet dignity, and danced gracefully. She was treated with the respect of a royal ambassador of one great nation to the court of another.

Lady Rebecca was introduced to the English Royal Court. Her husband, a commoner, was not introduced to the Royal Court. She also had an audience with King James. Her audience with King James was unusual for the King was known to dislike women (he preferred young boys). However, Lady Rebecca had a boyish figure which was pleasing to the King and engaged him in conversation regarding religion, a subject of great interest to him.

Lady Rebecca, also known as Pocahontas and Matoaka, died in England at the age of 21. The official English accounts report that she took sick with a “wasting disease” and soon died. There are others, however, who feel that she was murdered.