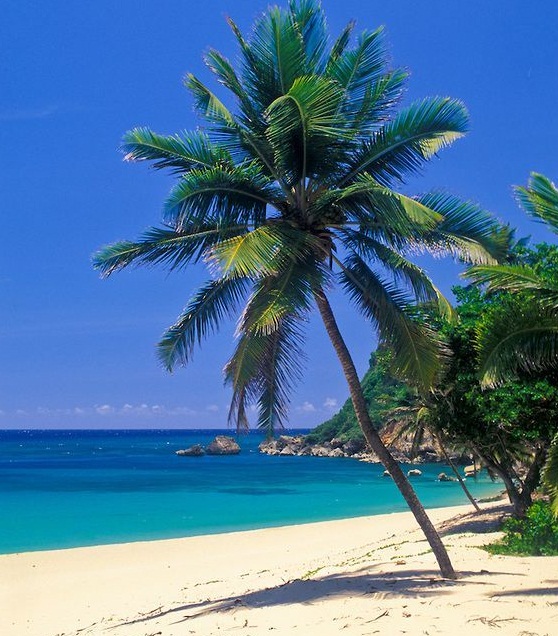 When the Spanish arrived in the Caribbean they found the native people there to be friendly. The Spanish had come to the Caribbean in search of great wealth: wealth from gold and silver; and wealth from agricultural crops such as sugar. Since it takes a great deal of labor to produce wealth from these things, they simply enslaved the Taíno. The impact of forced labor coupled with European diseases and deliberate murder soon decimated the Taíno population.

In 1511, the Taíno under the leadership of Urayoán and Agueybaná revolted. The revolt, however, was quickly put down by Ponce de León and the superior Spanish weaponry. By 1520, the Taíno population on Puerto Rico was considered almost extinct.

The Taíno culture emphasized creativity in pottery, basket weaving, cotton weaving, and stone sculpture. Both men and women painted their bodies and adorned them with jewelry made from bone, shell, stone, and gold. The presence of this gold jewelry encouraged the Spanish quest for wealth.

Feasts and dances were a part of the social, ceremonial, and religious life of the Taíno people. The Taíno drank alcohol which they made from fermented corn. Like Native Americans in other parts of the Americas, they also used tobacco in their religious ceremonies.  We don’t know a great deal about Taíno religion as the Spanish were not interested in recording it: they simply assumed that the Taíno didn’t have any religion.

One of the gifts from the Taíno to the rest of the world was the hammock. The term “hammock” is derived from the Taíno term “hamaca.” Hammocks were readily adopted by sailors all over the world as a convenient means to increase the crew capacity of ships. They also improved the sanitary conditions of the sleeping quarters. Today they are found in many American backyards.

In 1898, the United States decided that it wanted to become an imperial power so it acquired Puerto Rico as well as other colonies. Ignoring Puerto Rico’s aboriginal past, most Americans think of Puerto Ricans as hispanics in terms of both language and culture. Genetically, the Taíno DNA continues in many Puerto Ricans. More importantly, the memories of the aboriginal Borinquen have not been forgotten and many still call themselves Boricua and relate to this earlier culture.

The United Confederation of Taíno People (UCTP) was created in 1998. Its purpose is to protect, defend, and preserve the Taíno cultural heritage and spiritual tradition. Taíno cultural heritage and spiritual tradition includes but is not limited to the protection and maintenance of ancestral remains, sacred sites, artifacts, and religious practices which involve the use of ceremonial objects such as sacred plants and various feathers.

In spite of suppression by both the Spanish and the Americans, some of the Taíno language has managed to survive.

Contrary to what has been thought and taught by some, the Taíno language was not completely extinguished. Portions were absorbed over time into the Spanish-speaking Caribbean. Spanish spoken in Boriken retains over 600 Taíno words.

Among words of indigenous origin are objects, geographical names, personal names as well as flora and fauna. A few contemporary cities and towns in Boriken include Yabucoa, Bayamon, Coamo, Ceiba, Caguas, Guanica, Areciboetc.

Many Taíno words are used as adjectives and verbs. For example, the phrase “dar mucho katei” and “joder la pita” means to be very bothersome. “Duro como el guayacan” refers to a person in good shape and “tiene unos macos bonitos” means having pretty eyes.

With regard to religion, the Caney Circle has kept alive a modern version of the shamanic traditions of the Taíno.