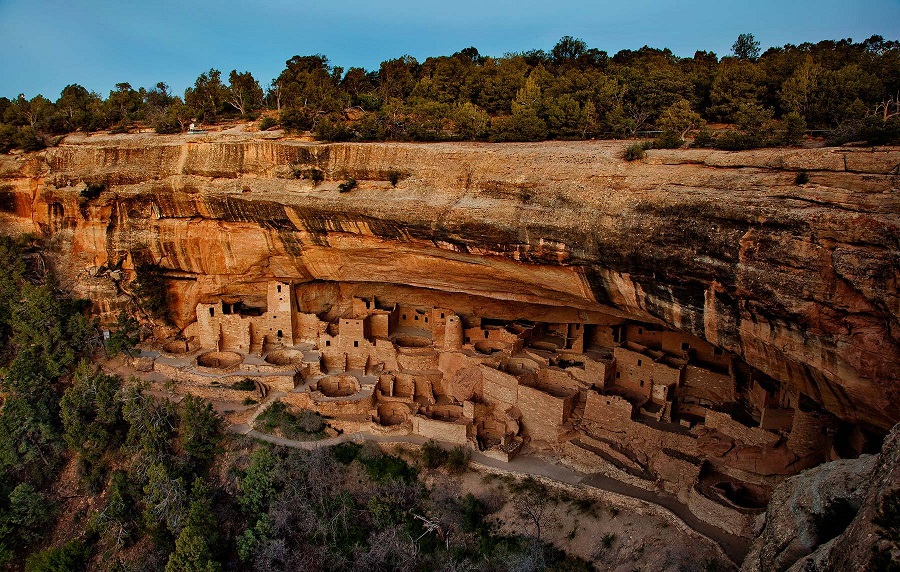 Our American and Canadian heritage begins long before Columbus supposedly “discovered” the Americas. For thousands of years people have lived in North America and they built cities and towns which were, and still are, architectural wonders. One of these is Mesa Verde in Colorado which is today a National Park. In this diary, I would like to look at what we know about the history of the people who built this place.

Mesa Verde, located in southern Colorado, is undoubtedly the best-known Native American archaeological site in the United States. Today it is a national park and here the tourists can see the magnificent cliff dwellings built by the Anasazi people. These cliff dwellings were built in shallow caves and under rock overhangs along the canyon walls. The houses, storage buildings, and other structures were built from blocks of hard sandstone held together with adobe mortar. The walls, once constructed, were then plastered with adobe mortar. In the popular press, the Mesa Verde Anasazi were a mysterious people who lived in the area for a short time (about two centuries) and then vanished. Who were these people?

Among the early inhabitants of Mesa Verde are some people called Basketmaker by archaeologists. They arrived in the Mesa Verde area about 600 CE and settled on top of the mesas. The Basketmaker pit house villages had populations of 40 to 150 people. They probably settled in this area because the mesa offered good soils, timber for house construction and plenty of wood for fuel. In addition, the region at this time received more precipitation compared to lower elevations. The mesa is high enough so that passing storms drop rain and snow, while at the same time, the mesa slopes to the southwest, which allows the sun to warm the deep, fertile soils. Other advantages included springs, game, nutritious and medicinal native plants, and quarries for obtaining the materials needed to make tools and utensils.

More than a century later-around 750 CE-Anasazi groups in the Mesa Verde area began building substantial above-group pueblos on the mesa tops and in canyon valleys. They also began construction of domestic water systems. In Morefield Canyon, the farmers began digging a reservoir. A shallow depression was constructed in the canyon bottom that breached the water table and collected runoff from the canyon slopes. In order to prevent the reservoir from filling up with sediment from the periodic runoff, it had to be routinely dredged. This was a labor intensive task that required organized crews.

In order to divert the runoff into the reservoir, the Anasazi created a rock-reinforced inlet channel. This channel, which was 1,400 feet long, had to be regularly cleaned, relocated, and elevated to maintain the proper gradient for filling the reservoir.

About fifty years later, the Anasazi farmers constructed another reservoir at Box Elder. In order to capture runoff, the Anasazi constructed an intake channel that extended up the canyon slope. At this same time, they established a village in the area.

In 950, the Anasazi farmers in Morefield Canyon in the Mesa Verde area were dredging their reservoir less frequently. Consequently, the reservoir began to fill with sediment and eventually formed a mound which was 21 feet high and 220 feet across.

At this same time, the Anasazi in the Mesa Verde area began construction of two mesa-top reservoirs: Far View and Sagebrush. Far View had a storage capacity of 80,000 gallons and Sagebrush 90,000 gallons. Both of the reservoirs were encircled by two parallel sandstone walls which stood about 10 feet apart. These walls were built to contain the sediments which were regularly dredged from the reservoirs.

In the eleventh century, the Anasazi began to construct pueblos in the caves and under the rock overhangs of the canyon cliffs. Construction of Cliff Palace began in 1073. Cliff Palace-this is the name given to the pueblo by modern archaeologists, not by the Indian people themselves-is the largest and best-known of the Mesa Verde cliff dwellings. The pueblo had at least 150 rooms and 23 kivas. It is estimated that Cliff Palace was once the home to about 150 people. The walls of the pueblo were built from large, well-fitted stone blocks. These blocks had to be laboriously shaped with stone hammers to present a uniform façade.

At Cliff Palace (and most of the other Mesa Verde cliff dwellings), both exterior and interior walls were finished by plastering them. The exterior walls which faced a public space were often colored red.

Construction of other cliff dwellings then followed: Oak Tree House in 1112; Spring House in 1115. Balcony House in 1190. While there were many similarities in the architectural design of each of these pueblos, each was also unique because of the individual topography of the different alcoves along the canyon walls. Pueblo architectural forms-kivas, towers, pit houses-had to conform to the allowable space in the canyon alcoves. This meant, in part, that there was a far denser concentration of the Anasazi populations.

Architecturally, there are many motifs and similarities with the Anasazi of Chaco Canyon. This includes features such as the T-shaped doors-these are doors which lead to public areas and are not closed off. There are some archaeologists who feel that these features indicate a direct connection between Mesa Verde and Chaco Canyon, including the migration of people. There are others, however, who interpret these similarities as simply part of a generalized Puebloan style which might have spiritual significance without implying a socioeconomic allegiance.

In 1180, the Mesa Verde Anasazi abandoned the Far View Reservoir as they moved their community from the top of the mesa to the cliff dwellings below. Here they used groundwater springs, seeps, and hand-dug wells for their water supply.

During the thirteenth century, the region began to suffer from frequent droughts as well as an increase in warfare. Many of the people who had been living on the rim of the mesa moved to the more defensible cliff dwellings.

Construction of Square Tower House began in 1204. The tower for which this site is named is the tallest structure in Mesa Verde. It originally had 80 rooms and at least seven kivas constructed in a south facing alcove. In places, the pueblo was four stories tall. It was only occupied until about 1300.

Construction of Spruce Tree House began in 1216. This pueblo was located on Chapin Mesa and was occupied for less than a century. Today, Spruce Tree House is easily accessible to tourists. In addition to the well preserved ruins, there is also a kiva with a restored roof.

While most of the construction of Mug House (named when early explorers found a cluster of mugs at the site) took place between 1250 and 1266, the first dwelling at this site on Wetherill Mesa-a small house unit with a storage room and a kiva-was actually constructed in the mid-eleventh century. By the time the pueblo was abandoned, sometime between 1276 and 1300, it had grown to 94 rooms on four levels. Included in the structure are towers, storage rooms, meal areas, and terraces. The rooms are clustered around a kiva. The kiva has a keyhole shape with a recess behind the fireplace and a deflector (so that air brought in through the tunnel to the outside does not directly impact the fire).

The entire structure for Mug House is built in a west-facing alcove that is 67 meters (221 feet) long and 15 meters (50 feet) deep. There is no spring or source of water at the site. In the canyon below the site, the Mug House occupants constructed a small reservoir that collected water runoff from the mesa top. This small reservoir is 7 meters (23 feet) long, 3 meters (10 feet) wide, and about 1 meter (3 feet) deep.

Like other Mesa Verde cliff dwellings, Mug House has a wall which divides the pueblo into two units. This suggests to archaeologists, that Mesa Verde society, like that of many contemporary Pueblo groups, was divided into moieties. That is, two groups with different social and religious functions. Each of these two units has its own tower and meal area.

The artifacts uncovered at Mug House show almost no evidence of trade with other areas. Like the residents of the other Mesa Verde pueblos, the people of Mug House made pottery: mugs, jars, ollas, bowls, and ladles. With regard to clothing, they wove cotton cloth, made yucca sandals, and made turkey feather blankets. They also made a wide variety of stone tools, including stone axes for cutting wood, stone arrowheads, and stone mauls for pounding. The milling of corn into flour was done through manos and metates.

While there are still a few people who insist that the Mesa Verde Anasazi mysteriously vanished, it is clear that these communities were carefully evacuated and useful goods were taken with them. Today’s Pueblo people are descendents of those who once lived in Mesa Verde.

According to Pueblo oral tradition, the last Mesa Verde chief was Salavi (whose name means “Spruce.”) This respected elder sent his people away in search of better land even though he was too old to travel with them. As the people left, he told them to return in four years. If he was to blame for the lack of rain and the withering fields, then they would find no trace of him. However, if his heart is pure, they will find a sign. According to Badger Clan history, when the people returned they found a four-year-old spruce tree next to a spring which was gushing water. A clan historian then wrote this story on the rocks at Pictograph Point.