This is the fourth diary in what was supposed to have been a three-part series on the Dark Ages of American Indian Religious Freedom. 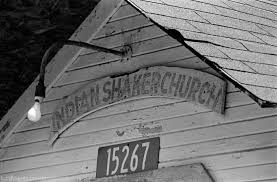 In this diary, we are going to look at how the Indian Shaker Church fought for their religious freedom.

In 1881, the Squaxin of the Puget Sound area in Washington would have described John Slocum has having a bit of an inclination toward alcohol and a well-known fondness for gambling. One day he became ill and died. Upon dying, he went to heaven where he was met by angels who told him that because he had been bad on earth he could not enter Heaven. He was then given a choice of going to hell or returning to life to preach to Indians about the way to enter heaven.

When he came back to life, he returned with a divine mission to fulfill among his people. Upon his return to life he begins to preach against alcohol, gambling, and other “Boston” vices.

Slocum’s new religion was strongly opposed by the Indian Agent, Edwin Eells who told the Indians to accept the Christian missionary’s guidance. However, Slocum’s experience was coherent with the pattern of the traditional Prophet Dance found among the tribes of coastal Washington and the Plateau area. The new religion also incorporates some Christian concepts due to the influence of the Protestant and Catholic missions in the Puget Sound area.

The focus of the new religion, as in the traditional Indian religions of the area, was on curing. In the curing ceremonies, practitioners would enter a trance state at which time the Spirit of God would come over them. Filled with this Spirit they would shake and the shaking represented the gift of curing. Hence the new religious movement was soon dubbed the Shakers, or, more formally, the Indian Shaker Church.

The major growth in the new religion came about in 1883. John Slocum again became ill and his relatives, fearing that he was about to die, called in a traditional healer. His wife, Mary, left the house in protest. Mary was then overcome by an uncontrollable shaking and re-entered the house to pray over her husband. John Slocum recovered and Mary’s shaking was hailed as medicine from God. This event marks the beginning of an explosive growth in the new movement.

The Indian Shaker Church diffused among the different tribes of the Puget Sound area. Curing ceremonies were frequently held and the Shaker Church often became important in the social life of the people. The Shaker Church was usually a rectangular wooden structure with a modest bell tower.

The American government opposed the Indian Shaker Church,  with government officials disrupting meetings and arresting the participants. In 1887, for example, the members of the Chehalis Indian Shaker Church met at the home of George Walker to doctor Puyallup Bill. Puyallup Bill had been spitting blood for a month or two and had come from the Puyallup reservation so that he could be doctored by the Shakers. The healing ceremony was discovered by school superintendent Edwin Chalcraft and consequently ten men were arrested. The leaders—John Smith, Peter Yo-kum, Thomas Heck, and George Walker-and the patient were sentenced to ten days of hard labor.

In 1892, the Indian Shakers held a meeting in public defiance of the Indian agent’s ban on their religion. They wished to affirm their freedom of religion. The meeting was disrupted by both Indian and non-Indian opponents, but attorney James Wickersham issued official looking documents affirming the Shakers’ right to practice their religion.

Wickersham then helped the Shakers organize their church into a legal corporation. Since a corporation is a person under American law, this makes the Church a person and as such gave it certain legal rights. With this action, the Indian Shaker Church became legally recognized and religious freedom was obtained.