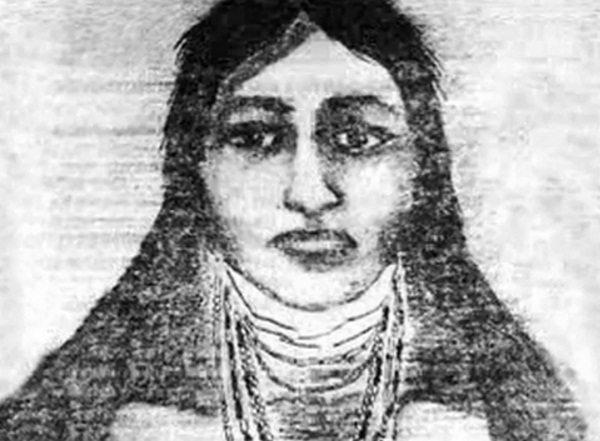 Among the Southeastern tribes, such as the Creek, tribal membership was traditionally determined by the mother. In a matrilineal culture, people belong to their mother’s clan. In Creek culture, blood relations were determined through the mother’s line and the father was not considered a blood relative, but rather a relative by marriage. Thus when European traders married into the Southeastern tribes, their children acquired tribal citizenship. When the English trader Edward Griffin married a prominent Creek woman, his daughter, born about 1700 and later known as Mary Musgrove, was considered to be Creek. Since her mother was a member of the Wind clan, Mary was also a member of the Wind clan.  Her Creek name was Coosaponakeesa.

Mary’s mother was related to the prominent Creek leaders Brims (she was his sister) and Chigelli. Later in life, using the European concept that leadership must be based on royalty, she would claim to have royal heritage.

Coosaponakeesa grew up in the Creek village of Coweta in present-day Georgia. While her first language was Creek, like many other Southeastern Indians of this time, she also learned English.

Since her father was a trader, Coosaponakeesa was able to observe and learn about the deerskin trade and about the differences between Indian and European colonial customs.

In 1710, following the death of her mother, her father took custody of her. Coosaponakeesa was taken to South Carolina to be baptized and educated in the principles of Christianity. After her father read her a story of a royal woman from the bible, she decided that she would be named Mary and she was therefore baptized with this name. She returned to Coweta in 1715.

In 1717, Coosaponakeesa, also known as Mary Griffin, married John Musgrove, the son of Captain John Musgrove, Sr. and a Creek woman. Captain Musgrove, a trader and planter, had been sent by the Governor of South Carolina to negotiate a treaty with the Creek Nation and had become friendly with the Creek leader Brims. Thus the marriage of Brims’ niece with Colonel Musgrove’s son was seen as a political alliance.

Following her marriage she took the name Mary Musgrove. The couple set up a trading post near the Savannah River. Being fluent in both Creek and English, she worked with her husband as an interpreter. In addition, her kinship ties brought business into the trading post.

Mary had three sons with John Musgrove, none of which lived to adulthood.

In 1733, James Oglethorpe and a group of trustees were granted a charter by King George II to start a settlement colony in Georgia. Mary soon became Oglethorpe’s primary interpreter. The establishment of the new colony allowed the Musgroves the opportunity to expand their business enterprises. The English formally granted John Musgrove land at Yamacraw Bluff on the Savannah River, about four miles upstream from the new town of Savannah.

As the principal interpreter for James Oglethorpe, Mary was in a unique position to act as a cultural liaison between the English and the Southeastern tribes. She was instrumental in the peaceful founding of the colonial town of Savannah. She not only translated words, but she taught the English (primarily Oglethorpe) about Indian ways and how to get along with the Indians. From the English she received financial compensation for her work as well as some prestige as their primary interpreter. She continually used her position to foster peace between the English and the Creek leaders.

Mary was also an important liaison between the English and other Southeastern tribes. In 1736, for example, she was Oglethorpe’s interpreter in a council which was held with both the Creek and the Chickasaw.

When John Musgrove died in 1735, Mary moved the trading post to Yamacraw Bluff. The trading post, known as the Cowpens, became one of the major centers for the deerskin trade between the English and the Indians.

Mary Musgrove remarried in 1737. Her new husband, another Englishman, was Jacob Matthews. Matthews had been an indentured servant to John Musgrove. He was several years her junior. The couple was married in a European-style wedding officiated by an Anglican minister. They established another trading post at Mount Venture on the Altamaha River. Jacob Matthews was not highly regarded by the English colonists who viewed him as a drunk and an opportunist.

In 1737, Creek leader Tomochichi transferred several tracts of land to Mary. She had requested the transfer to facilitate her livestock business. In Creek culture, women were allowed to have property separately from their husbands. The British, however, refused to acknowledge this internal transfer of Creek land. While the British utilized her services as a translator, they had difficulty acknowledging a woman’s right to own property. The British also decreed that the Creek Nation could only cede land to another nation, not to an individual.

In 1739, James Oglethorpe held a large council with the Creek in Georgia. As usual, Mary assisted him in the translations. As a result of the council, the Creek reaffirmed their land grants to Georgia and the Georgians promised to respect Creek boundaries and territories.

Jacob Matthews died in 1742. Two years later, Mary married the Reverend Thomas Bosomworth. While Mary was a successful trader with vast land and livestock holdings, the class-conscious English colonists felt that Bosomworth had married below his station. His status coupled with her cultural skills proved to be a powerful combination. Together they traveled to the Creek villages with messages from Oglethorpe and the English King. They brought back to the English leaders the messages from the various Creek leaders. They often hosted both Creek and American visitors in their home. In general they mediated between the Indians and the colonists.

Mary and Thomas set up a new trading post at the Forks (the confluence of the Ockmulgee and Oconee Rivers). Thomas brought six African slaves with him to the new post.

In 1743, Oglethorpe left Georgia and returned to London. He left Mary £100, an unfulfilled promise of £100 per year, and the diamond ring from his finger. While Oglethorpe had relied on Mary to keep the Creek leaders allied with English interest, the English leaders who followed him did not trust her, in part because she was a woman.

The Creek chief Malatchi granted Mary and her husband three islands: Ossabaw, Sapelo, and St. Catherines. Once again, the British refused to acknowledge these grants.

In 1745, Mary Musgrove Bosomworth petitioned the Georgia Trustees for recognition of Tomochichi’s cession of a tract of land to her. She also asked for back payment for the 12 years which she served the colony as an interpreter. The Trustees refused to recognize her land claim. With regard to her claim for back payment, they decreed that a debt owed by her husband must be paid before any settlement could be made.

In 1747, Creek leader Malatchi acknowledged to the British colonial authorities the land claims of his cousin Mary Musgrove.

In spite of their dispute with Mary over land claims and back pay, the English colonial officials still needed her help. In 1747 they asked her to lead an expedition to ameliorate a dispute between the Creek and the English settlers in South Carolina and Georgia. The English officials, however, felt that they could not have a woman lead such an expedition and they instead appointed her brother-in-law as the official leader.

In 1749, Mary and her husband decided to travel to England to directly petition for compensation for her services to the colonies. A rumor soon circulated through the Creek villages that she was going to England under duress. Some rumors claimed that she was going in chains. In response to the rumors, Creek leader Malatchi traveled to Savannah to check on his cousin. The British, ignorant of the role which women play in Creek culture, assumed that Malatchi wouldn’t travel so far just to check on the status of a woman. They thus ignored his arrival which was an insult to his position as a Creek leader.

With feelings rising on both sides, the Creek leaders were treated to a customary dinner. During the meal, Mary Musgrove announced that she was the “empress” or “queen” of the Lower Creek, and that she was a British ally rather than a subject. The British refused to accept this claim and Mary Musgrove and Malatchi left in anger.

Following the incident at Savannah, about 200 Creek under the leadership of Malatchi met with the British governor and presented to him a paper stating that Mary Musgrove was their queen. The British simply dismissed her as “an insignificant squaw.” She refused to leave the council and began shouting. After a confrontation with the Creek warriors, the enraged British had the colonial magistrates arrest her. Her husband, Thomas Bosomworth, publicly apologized for her and promised that there would be no future outbursts.

By 1752, Mary and Thomas went to Charles Town in South Carolina to find transportation to England so that they could plead their case in person before the Board of Trade. However, the governor of South Carolina delayed their departure by asking for their assistance in establishing peace between the Creek and the Cherokee.

They finally traveled to England in 1754 and were able to present Mary’s case directly to the Board of Trade. The Board of Trade referred the case to the Georgia courts.

In 1755, Mary Musgrove identified herself to the British colonial authorities as the head of the Creek Nation. She reminded the British that in Creek culture, inheritance is through the female line. Thus her “royalty” came from her mother who was the brother of the Creek mico Brims and the Creek war leader Chekilli. Her father was English.

The English finally settled Mary Musgrove’s claim for past services and recognition of land claims in 1759. The settlement was a fraction of that which was owed. In exchange for St. Catherines Island and £2,100, she relinquished her claim to the other islands.

Mary Musgrove died on St. Catherines Island in 1763. While she served the British as a translator, she received little compensation for these services. While the Creek acknowledged her as a “queen,” the British refused to recognize that a woman could have political power.