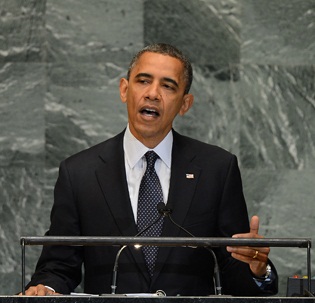 Obama should sign theDeclaration on the Rights of Indigenous Peoples because…

When asked whether or not Means had a valid argument to move his case to a federal court based on constitutional rights violation, Long replied, “Mr. Means ‘claims’ that the Black Hills is treaty territory and that South Dakota has no jurisdiction over him. I don’t believe that he has any rights to fish without a license under the U.S. Constitution.”

“I have never even read the Ft. Laramie Treaty,” Long admitted.

The “listening session” held by the U.S. State Department on March 16 at the University of New Mexico Law School drew more than 100 Native leaders, legal scholars and human rights activists, many of whom called on the United States to adopt the United Nations Declaration on the Rights of Indigenous Peoples.

That is, it is time for governments to respond, to show action at the national level, to form effective partnerships with the Indigenous Peoples for good government and achievement of true equality.

At the time of adoption in 1948, there was controversy and uncertainty about the human rights regime and the authority of the UDHR, but now we see there is no longer any controversy or doubt about the UDHR and its strong foundation for the subsequent human rights conventions or treaties.

The Declaration on the Rights of Indigenous Peoples elaborates rights that are already recognized in the Covenant of Civil and Political Rights (CCPR) and the Covenant on Economic, Social and Cultural Rights (CESCR).

On Oct. 13, 2008 (Columbus Day), in Barcelona Spain, the World Conservation Congress (WCC) of the International Union for Conservation of Nature (IUCN), voted to endorse and begin implementing the UN Declaration on the Rights of Indigenous Peoples that was adopted by the United Nations General Assembly on Sept. 13, 2007.

The motion passed by the WCC recognizes that the UN Declaration is “the international mechanism for alleviating the tremendous pressures and crises faced by Indigenous Peoples throughout the world as they endeavor to protect Indigenous ecosystems, including biological, cultural and linguistic diversity.”

Obama should sign the Declaration on the Rights of Indigenous Peoples.Period.

“Plain language” version of the Declaration

Note that this plain language version of the Declaration on the Rights of Indigenous Peoples was developed in 2004 and therefore does not exactly follow the version adopted by the Human Rights Council in June 2006. It does, however, give a good insight into the content of the Declaration.

The Preamble lists some of the reasons, which led the United Nations to develop a declaration on indigenous peoples’ rights. The Declaration sets out the rights of indigenous peoples. The language of “peoples” is important. Indigenous peoples do not want to be treated simply as numerical “populations”. They want recognition of their rights as distinct peoples, including the right to self-determination, and the right to control development of their societies.

After all, Obama signed the PACT Act.

WASHINGTON – President Obama on Wednesday signed legislation that bans the U.S. Postal Service from shipping cigarettes – a measure that’s expected to cripple the mail-order tobacco businesses run by members of the Seneca Nation of Indians.

“We have at least 90 days from the signing before the postal delivery ban goes into effect, so we’ll all be looking at ways to adapt and save as many jobs as possible,” said J.C. Seneca, a tribal cqcouncillor and co-chairman of the Seneca Nation’s Foreign Relations Committee.

“We’ve been pushed around by the government for centuries, and we keep finding ways to survive.”

The 10th U.S. Circuit Court of Appeals recently ruled against the Osage Nation’s contention that it has a federal Indian reservation and therefore its members living and working on the reservation should be exempt from paying state income taxes as defined by federal law.

Congress had specifically, with clear language, disestablished reservations both prior to and after the 1906 Osage Allotment Act, but purposefully chose not to do so in the Osage case. The Oklahoma Tax Commission failed to identify clear language in any act of Congress which supports its “disestablishment by allotment” claim.