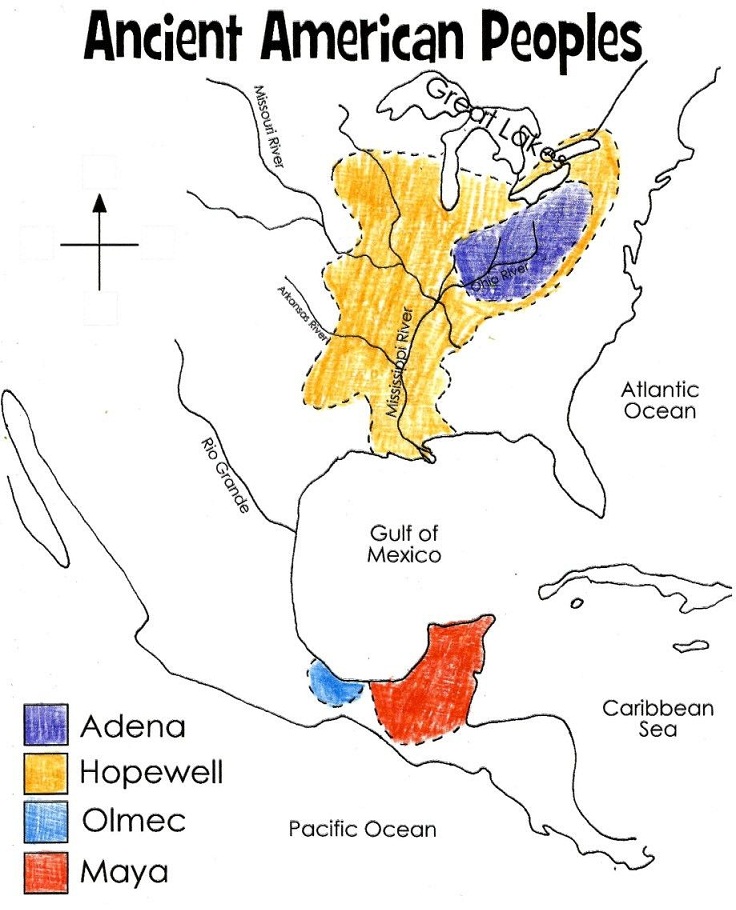 Our American and Canadian heritage begins long before Columbus supposedly “discovered” the Americas. For thousands of years people have lived in North America and they built cities and towns which were, and still are, architectural wonders. About 2,200 years ago, the Indian people living in the Ohio and Mississippi areas began a new cultural complex which archaeologists would later call Hopewell. One of the outstanding characteristics of the Hopewell culture is the earthen mounds. Typical Hopewell mounds are 12 meters high and about 30 meters across at the base. Earthworks, which sometimes exceed 500 meters in diameter, were constructed in circular, square, rectangular, and octagonal shapes.

Hopewell is sometimes called a civilization without cities. The people settled in small farmsteads and hamlets within hailing distance of one another. Their settlements were spread out along the floodplains and terraces or they were loosely clustered in the upland areas.

The size and complexity of the mounds provide insights into Hopewell planning, engineering skills, and social organization. The mounds and other archeological evidence show that Hopewell people had a highly developed social organization that included class structure and a division of labor, with specialists like metal workers, artists, and traders. In addition, they had leaders of hereditary rank and privileges, a strong religious system, and control over cooperative labor.

The Hopewell mounds appear to have been ceremonial centers, places where people were buried. In addition to mortuary ceremonies, they were probably also used for other ceremonies.  These ceremonies provided an opportunity for the people living in scattered villages to come together.

A second major characteristic of Hopewell was the flowering of artistic creation at this time. The Hopewell people not only made many useful items, but they made artifacts that were beautiful. They decorated their pottery with both dentate-stamping and rocker-stamping. Their pottery often had cross-hatched rim decorations and zoned decorations.

Another characteristic Hopewell artifact was their platform smoking pipes. These pipes were sometimes carved with animal and bird effigies.

For personal decoration, the Hopewell people made pottery rings, ear spools from both copper and stone, and copper headpieces. They often used antlers to indicate chiefly or leadership status.

Another interesting Hopewell artifact is the Hopewell Hand: a hand which was carved from mica and buried in a mound in Ohio.

While it is common to characterize Indian people prior to the arrival of the Europeans as “stone age” people, the Hopewell made many different artifacts from copper. Their copper artifacts included musical instruments such as panpipes, cutting tools such as copper celts, copper needles, and beads made from both copper and from meteoric iron. In addition to working with copper, the Hopewell artists also made some objects from gold and silver.

Like other Indian cultures, the Hopewell were not isolated from the rest of North America. The Hopewell trading network spread west to Yellowstone Park in Wyoming, north to Ontario, Canada, and south to the Gulf of Mexico. Trade goods included copper from the Lake Superior area, mica from the southern Appalachians, obsidian and grizzly bear teeth from Wyoming and Montana, and marine shells from both the Atlantic and Gulf of Mexico. It is clear from the distribution of these goods that some network, either social or religious, must have existed for this exchange to take place.

As evidence of this wide trading network, Hopewell graves in Illinois, Michigan, and Illinois contain such items as conch shells from the Gulf Coast, shark teeth from the ocean, and pipes with alligator effigies.

Hopewell influence stretched from Minnesota in the north to Mississippi in the south, from Nebraska in the west to Virginia in the east. This does not mean that Hopewell was an empire, or even a political confederation of tribes. Rather, Hopewell as probably one of the first Pan-Indian religious movements whose artistic style and ideas influenced many other cultures stretching from Mississippi to Minnesota, from Nebraska to Virginia.

Hopewell influenced the mound-building cultures of the southeast. The Mandeville site in Georgia displays clear evidence for participation in the so Hopewell Interaction Sphere (the area of Hopewell influence). Artifacts at the site which are identified as Hopewell include copper panpipes, copper ear spools, mica, platform pipes, ceramic figurines, galena, and “Flint Ridge” blades.

The Mandeville site was abandoned about 300 CE. At this time there was a decrease in Hopewell influence in the region. The abandonment appears to have been part of a larger shift in settlement in the lower Chattahoochee River Valley.

The mounds and other features show that the Hopewellians had a highly developed social organization. This probably included a class structure and a division of labor, with specialists like metal workers, artists, and traders; leaders of hereditary rank and privileges; a strong religious system; and direction over cooperative labor.

While the Hopewell did raise some corn, this was not their most important food source. They raised a number of indigenous crops, such as sunflowers, marsh elder, squash, little barley, erect knotweed, maygrass, and stumpweed. They also got much of their food from gathering wild plants, from hunting and from fishing. For fishing, they made fishhooks from both copper and bone.

Hopewell villages tended to be located in areas which were good for growing native crops. Usually their settlements were dispersed along stream and river valley corridors. Their villages generally did not appear to have any overall community plan.

While there are no clear connections between Hopewell and contemporary Indian tribes, many of the cultural traditions of the Iroquois tribes seem to be linked to Hopewell. The Iroquois, like the Hopewell, use antlers as the metaphor for chiefly office. Similarly, both groups use a weeping-eye motif in their art.