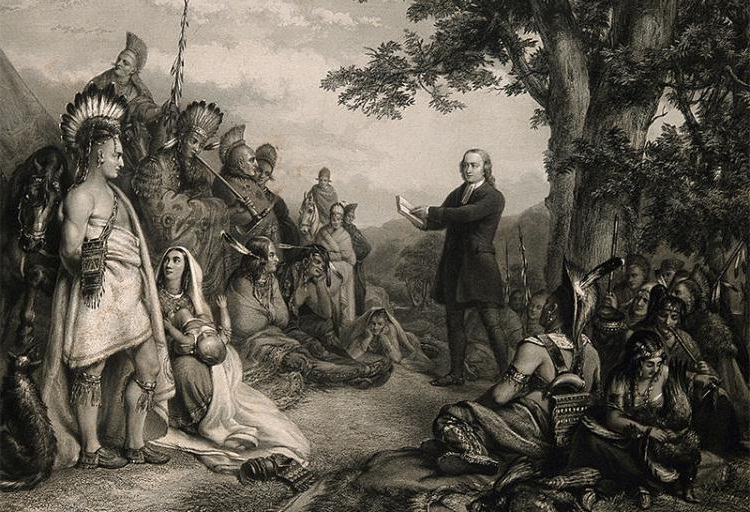 Christianity came to the Indian nations of the United States in a variety of ways. Sometimes a single non-Indian missionary was the vehicle, and sometimes it came from a variety of sources including Indian missionaries. In 1825, Governor George Simpson of the Hudson’s Bay Company was besieged by Indians in present-day Washington state seeking Christianity. At Fort Okanagon he spoke with a Thompson chief who asked for a missionary. A few days later, a delegation of Flathead, Spokan, and Kootenai asked for a missionary. This delegation was followed by two Nez Perce chiefs who were asking about Christianity.

Inspired by what he saw as an interest in Christianity, Governor Simpson conceived the idea of selecting some Indian boys from the Columbia River tribes and sending them east to be educated. His idea was that these boys could help in “civilizing” the tribes upon their return. Two teenage Indian boys – one from the Spokan in Washington and the other from the Kootenai in Idaho – were sent to the Red River School in Canada. The boys were renamed Kootenai Pelly and Spokan Garry.

In 1829, Spokan Garry and Kootenai Pelly returned to the northwest from the Red River School in Canada. Garry’s father, Illim-Spokanee, died while the boy was at school and so the Spokan greeted him as a leader’s son who should be heard on matters affecting the welfare of this people. Spokan Garry brought with him the Christianity which he learned in school and preached it to the tribes in eastern Washington. Soon after his return, Spokan Garry built a tule mat church and school along the Spokane River. He taught brotherly love, peaceful behavior, and humility.

The Spokan made Spokan Garry a chief and gave him two wives-one a Umatilla and the other a San Poil.

In 1830, the Hudson’s Bay Company sends two Nez Perce boys to the Anglican mission school at Red River, Manitoba for schooling. One of the boys, the son of war chief Red Grizzly, was given the name Ellice (also spell Ellis).

The following year, a group of Nez Perce from Idaho journeyed with an American fur trading party to St. Louis to seek further information about Christianity. The Nez Perce had been inspired by Spokan Garry and wanted to have their own copy of the “book.”  The Nez Perce delegation included Tipyahlanah (Eagle), Kipkip Pahlekin (Man of the Morning), Hi-yuts-to-henim (Rabbit Skin Leggings), and Tawis Geejumnin (No Horns on His Head). The two older Indians – Tipyahlanah and Kipkip Pahlekin – become ill, were baptized, and then were buried in a Catholic cemetery when they died.

On the return trip Tawis Geejumnin became sick and died near the present-day Montana-North Dakota border. Hi-yuts-to-henim returned safely to the Nez Perce.

The Nez Perce oral tradition conflicts with the Christian version of this journey. According to some oral histories, the purpose of the delegation was to acquire American technology and this was misunderstood in St. Louis.

In 1833, two Nez Perce young men-Pitt and Ellice-returned home from the Red River school in Canada. Pitt was the only Indian student from the Columbia River area sent to Red River who was not the son of a powerful chief. He had little impact on the beliefs of his people. Ellice, on the other hand, taught the people a simple form of Anglican beliefs.

In 1836, Marcus Whitman established a Presbyterian mission among the Cayuse in Oregon. The Whitmans were intolerant of Indian culture and beliefs. Like many other missionaries they fanatically demanded total conversion to Presbyterian ways. They tended to divide Indians into only two categories: the devout (meaning Protestant Christian) and the heathen. Tribal affiliation meant little to them.

At the same time, a Presbyterian mission was also established by Henry Spalding among the Nez Perce in Idaho. Spalding believed himself to be the savior to people who had no religion. He saw the Nez Perce as being misled by their spiritual leaders, whom he viewed as sorcerers.  He had little tolerance for the Nez Perce cultural beliefs and habits and often erupted into bursts of anger at them. Nez Perce elder Allen Slickpoo writes:

“Many of our elderly people have related stories about Spalding using Nez Perce labor without any compensation to perform hard chores except being told that they were ‘doing it for the Lord.’ Related stories were also told of Spalding tying a person to a flogging tree and giving him twenty lashes for being disobedient. To many of us this is an act of slavery, whether it was for ‘the Lord’ or not.”

The Presbyterian missionaries violently opposed and condemned the Catholics and most of the non-missionary trappers and traders in the area.

The Presbyterians introduced European medical practices, partially to discredit the Nez Perce medicine people and partially to ingratiate themselves with the people. With regard to religious practices, the missionaries included prayers, hymns, and instructional materials in the Nez Perce language.

“I stand in the place of God. I command. God does not whip. He commands.”

Two years later, a Nez Perce woman ran away from her American husband. The Protestant missionary ordered the woman to receive 70 lashes. This action upset the Nez Perce as they felt that the woman had the right to divorce her husband if she wanted. From the Nez Perce perspective, it was the husband who should have been whipped since he had abused his wife.

Christianity Comes to the Flathead Indians

Setting the Stage for the Nez Perce War