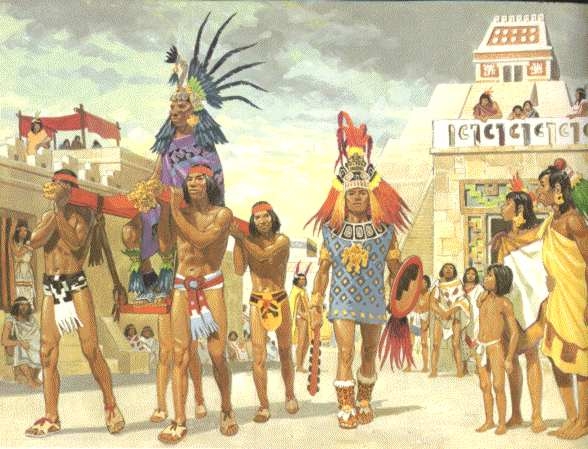 The rise of the Aztec empire really began in 1150 with the fall of the Toltec empire. The Toltecs had established their state in Tula, which was to the north of what would become Tenochtitlan. Their empire spread through most of central Mexico. After a period of droughts and internal factional conflict, the city collapsed and was burned and looted, possibly by the Chichimeca (the “wild” tribes to the north).

The fall of the Toltec empire was followed by a period in which rival states battled for power. These states included the Zapotecs, centered at Mitla, the Mixtecs, in the northern Oaxaca area, and the Tarascan kingdom, plus the Chichimeca.

By 1200, the Valley of Mexico contained a number of moderately sized city states. The Aztec, who arrived in the Valley about 1248, adopted some of the key organizational and ideological principles which they learned from the refugee Toltecs. These included the ruling elite or pipilitin and the requirement that only a descendant from a royal Toltec dynasty could become the emperor.

In 1300, the Aztec were still a small tribe. In addition to knowing how to cultivate the land, the Aztec were fierce warriors who were inspired by their war god Huitzilopochtli (which means “hummingbird on the left”). The Aztecs were vagrants continually trying to find a territory to occupy. All of the good land in the Valley of Mexico was already occupied by city-states. Thus the Aztec offered their services as mercenaries for these local rulers. They often offended these rulers with their barbarous behavior and their capture of local women for wives.

In 1323, they were working for the Coluacan (also spelled Culhuacan) people. Coluacan, located in the southern portion of the Valley of Mexico, was the city-state to which the Toltec nobility had fled following the collapse of their empire.

The Aztec obtained a princess from their employers by asking the Colhuacan for a noble bride, and the Colhuacan complied as they feared the fierce Aztec mercenaries. The Aztec then killed the princess and the priests donned her skin. When the Colhuacan saw the priest wearing her skin, they were so angered that they attacked the Aztec, killed many of them, and drove them out. From here, the Aztec retreated to a marshy unoccupied Island. It was here that they established Tenochtitlan.

In 1367, the Aztec used their military might to support the nearby kingdom of Tepanec that was expanding on the mainland, then ruled by Tezozomoc.  As the Tepanec expanded their rule over more and more city-states in the Valley of Mexico, the Aztec benefited from their alliance with the Tepanec.  From this alliance, the Aztec learned about the techniques which the Tepanec used to build and rule their empire.

In 1426, the old ruler Tezozomoc died and was replaced by his son Maxlatzin. He was concerned that the Aztecs had been growing too strong under the Tepanec’s protection.   He therefore sought to reduce the Aztec’s power in 1427. At this time, the Aztec’s third king died and was replaced by Itzcoatl, who chose Tlacaelel, a brilliant military strategist, as his chief adviser.  The two of them decided to resist and fight rather than submit to Maxlatzin’s threats and pressure.  Within a year, the Aztecs had crushed the Tepanec and destroyed their imperial city.   So now the Aztec had become the greatest state in Mexico.

With the help of Tlacaelel, Itzcoatl reduced the power of the other nobles, and turned himself into an absolute ruler. He developed a new vision of the Aztec as the “chosen people” who were the “true heirs” to the Toltec. The Aztec rewrote history to link the Aztec to the Toltec and to show that the Aztec were the heirs, the direct descendents, of the Toltec nobility.

The next Aztec emperor, Motechuhzoma Ilhuicamina ruled from 1440-1469. With Tlacaelel’s help, he set up a Triple Alliance between Tenochtitlan and two neighboring states – Texcoco and Tlacopan – to carry out the “Flowery War” – the continual fight against other states to capture victims to sacrifice to the sun god.