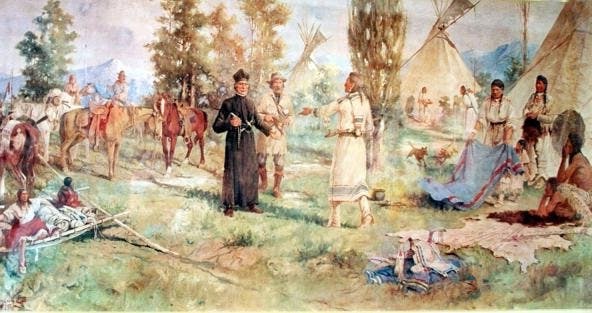 During the 1830s, a major stir occurred among the missionary groups in North America when there reports of the “savage” tribes from the interior who had come to St. Louis seeking Christianity. One of these tribes was the Flathead or Bitterroot Salish, a Salish-speaking tribe whose traditional territory included much of Western Montana. After they acquired the horse during the early 1700s, they began going east of the Rocky Mountains to hunt buffalo.

During the 1800s, this buffalo hunting area east of the Rocky Mountains on the Great Plains was claimed by a number of different tribes and there were often battles between them. The animosity between the Flathead and the Blackfoot was particularly intense and Blackfoot warriors were often successful in their raids on Flathead hunting parties.

In 1820, a group of about two dozen Christian Iroquois (Catholic Mohawk from Quebec) under the leadership of Old Ignace La Mousse came to live among the Flathead. The Iroquois worked for the Canadian fur traders and were to help establish fur trade and to show the Flathead how to trap.

The Iroquois preached their version of Christianity to the Flathead and taught them a number of Christian prayers and hymns. They told the Flathead about the great power of the Black Robes – the Jesuit Priests of the Catholic Church.

In 1831, some of the Flathead decided that the power of the Black Robes (Jesuits) could help them prevail over their enemies. The American Fur Company transported four Indians, including Silver Eagle and Running Bear, to St. Louis where they met with William Clark. Clark, of  Lewis and Clark fame, had first made contact with the tribe when the Corps of Discovery had passed through their territory. While Clark was sympathetic to their request for missionaries, he was unable to find any Black Robes who were free to go to western Montana. All four of the Flathead men died on their return trip.

In 1835, the Flathead still felt it would be good if they were to have a Black Robe live among them and share with them the great power of the Black Robes. Consequently, a second delegation of Flathead left Western Montana to travel to St. Louis, Missouri.  The journey from Western Montana to Missouri was not an easy one for it meant that they had to pass through territories claimed by other tribes, such as the Crow and Lakota. Even though they were on a peaceful mission, it was easy to be mistaken for a war party and to invite attack by other tribes.

In St. Louis they asked for a Black Robe to be assigned to them. The delegation included Old Ignace, the Iroquois who first introduced the Flatheads to Catholicism. In spite of the request, all available Jesuit manpower was committed to establishing a mission among the Kickapoos on the southern Plains and therefore there was no one available to be assigned to the Flathead.

In 1837, a third Flathead delegation led by the Iroquois Old Ignace began another perilous journey east to seek a Black Robe. However, the delegation was attacked by the Lakota and all were killed.

In 1839, a fourth delegation of Flathead, including Peter Gaucher and Young Ignace, left Western Montana to journey to St. Louis. Upon reaching St. Louis, they met with Bishop Rosati. In their meeting with Bishop Rosati they extracted the promise that a priest would be sent to live with them.

In 1840 the Jesuits sent Father Pierre-Jean De Smet to live among the tribes of Western Montana. His first contact with them was at the Three Forks of the Missouri River where he was welcomed into a camp of Flathead and Pend d’Oreille.

Upon his arrival in Western Montana’s Bitterroot Valley in 1841, Father De Smet set about constructing St. Mary’s mission, baptizing children, and instructing the people in the ways of Catholic Christianity. He placed a large hand-hewn cross in the center of a circle. Then he gave a short service and all the Indians present, young and old, came forward and solemnly kissed the cross and declared an oath that they would never forsake the religion of the Black Robes. At least this was his interpretation of what happened. DeSmet soon baptized about one-third of the tribe.

The Flathead seemed eager to accept the new religion, but did not see it as a replacement for their old religion. Rather, they saw it as an additional power. Thus the people soon came into conflict with the priests. The people did not want to give up their way of life as the priests demanded.

Five years later, De Smet managed to anger the Flathead. Father De Smet had decided to Christianize the Blackfoot, the mortal enemies of the Flathead. In spite of having lived with the Flathead for five years, De Smet did not understand the fact that the Flathead were not particularly interested in the moral and non-material aspects of Christianity. Instead, they were primarily concerned with its protective powers and its ability to help them overcome their enemies.

When the Flathead had become Christian they had become successful in repelling Blackfoot attacks. This success, according to the Flathead, was due to the superior power of the Black Robes and if this power were to be given to their enemies, they reasoned, they might be exterminated. De Smet’s promiscuous proselytizing – giving the power to their enemies – caused Flathead resentment and hostility toward the priests and toward Christianity.

The Small Robes band of Blackfoot had witnessed a battle in which the Flathead had vanquished the Crow. The Blackfoot felt that the reason for the victory was the great War Medicine of the Black Robes. Consequently, they had their children baptized. Encouraged by this Father De Smet set out to find the main band of the Blackfoot so that he might: (1) establish peace between the Flathead and the Blackfoot, and (2) establish a permanent mission among the Blackfoot.

When DeSmet returned to the Flathead he found that their attitude toward the Black Robes had changed. Now they openly challenged the Black Robes by publically gambling, an activity which the priests discouraged. In some instances, they disrupted the church services and they openly practiced shamanism.

Today many, if not most, of the Flathead are Catholic and participate in Catholic ceremonies. At the same time, many also practice some of the “old ways” and see no conflict between the two. Christianity provides them with additional power.

Christianity Comes to the Flathead Indians

Continuing “The Genocide of Matriarchal Societies”

Christianity Comes to the Nez Perce