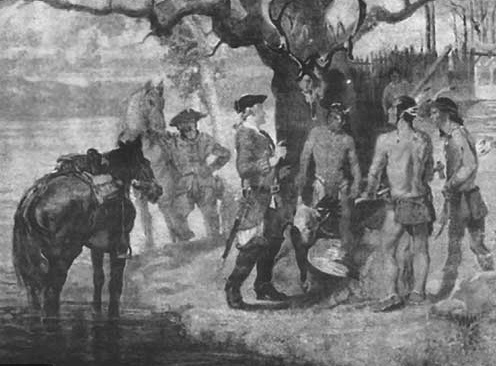 When the English colonists arrived in what is now the state of Virginia in 1607 and established their small village at Jamestown, they did not find a wilderness. Instead, this was a land inhabited by a settled, agricultural Indian people. Without the Indian agricultural surpluses – corn, beans, squash-which the Indians traded, and often freely gave to the English, it is doubtful that the new colony would have survived for more than a few months, or perhaps only a few weeks.

The fall line refers to a zone of transition in  the eastern United States where the rivers flow from the harder rocks of the Piedmont to the softer rocks of the coastal plain. As a result, there are a series of waterfalls and/or rapids along the fall line.

Much of the Northeast was inhabited by Algonquian-speaking tribes, such as the Lenni Lenape (also called Delaware), the Massachusett, the Pequot, the Penobscot, the Mi’qmaq, and many others. Linguistically, these tribes are related to Algonquian-speaking tribes in other parts of the continent, such as the Anishinabe (also called Ojibwa and Chippewa), Cree, Blackfoot, Gros Ventre, and Cheyenne.

For several centuries prior to the arrival of the Europeans the Indians of Virginia had been farmers. Their style of farming, which resulted in agricultural surpluses, was, however, very different from that of the English. First of all, it was the women who worked the fields. In fact, the women owned what was produced in the fields.

Depending on the village size, the fields would range from 20 acres to 200 acres.  Their agricultural fields were initially cleared by cutting the trees about three feet above the ground and then burning the trunks and branches. The clearing was often done by large parties of men and women. Using digging sticks, the women and children would then plant seeds among the stumps.  Eventually the stumps were removed from the fields.

One of the major crops raised by American Indians was corn and this was an important food to the Indians of Virginia. Corn was prepared in a number of ways, including making hominy of the kernels and making a stew of beans and corn called succotash. Corn meal ground in wooden mortars was boiled or baked in the shape of cakes or round balls.

While it is not uncommon for some histories to describe the Indians of Virginia as “hunters” at the time the English colonists arrived, agriculture was far more important economically and contributed more to their diet. Hunting, usually carried out by the men, was used to supplement their agricultural diet.

In their hunting practices, the Indians of Virginia often used fire drives to take large numbers of deer. By setting fire to certain areas, the hunters could drive the deer into their bow and arrow range. It was not uncommon for 200-300 hunters to work together during these drives.

The use of fire in deer hunting had some other ecological consequences. Burning cleared the underbrush, thus making it easier for the hunters to move through the forests. In addition, it encouraged the fresh growth of small leafy vegetation. This in turn, helped support a greater variety of species.

The Virginia Algonquians used a number of different fishing methods, including weirs constructed from reeds, hook and line, nets, and bows with arrows attached with lines. They would also fish at night, using torches to attract the fish.

While the Hollywood stereotypes often show Indians living in a kind of tent called a tipi, the Indians of Virginia, like the other Indians east of the Mississippi River, built permanent houses. Their houses, usually called longhouses, were constructed using a frame of saplings which was then covered with bark. These houses were usually about 20 feet wide and some were over 100 feet long.

Each longhouse served as the home for several related families. Benches or raised platforms along the sides of the houses provided sleeping areas. There would often be several cooking fires within the longhouse, and most commonly two families would share a single fire.

In addition to houses, the Virginia Algonquians also constructed storage facilities, sweat lodges, temples, and council houses (machacomocko). The council houses were fairly large and some contained more than one room. The early English explorers in Virginia describe the Great House of the Powhatan as being more than 200 feet long and 50 feet wide. Along its walls were two tiers of benches which could seat several hundred people. The roof of this large building was supported by four carved pillars.

Among the Powhatan in Virginia, the priest lived in the temples where they kept a perpetual fire burning and where they recorded their histories in picture writing. Their writing consisted of pictures painted on hides which recorded the events of the past. The priests conducted ceremonies as well as acting as doctors who cured the sick using both spiritual cures and medicinal remedies.

Among the Virginia Algonquians, children received their first name shortly after birth. Additional names were later acquired and reflected special merits or abilities.

As with many other Indian people in North America, a part of the transition between childhood and adulthood involved a vision-quest. At this time, the child would attempt to obtain a tutelary spirit and in this way establish a personal connection with the supernatural world. It was important for both men and women to have gone through this experience and to have obtained this personal spiritual connection.

Among the Powhatan, the vision-quest ceremony was known as the huskanaw. As a part of this ceremony, the young men ran through a gauntlet several times and become spiritually and ceremonially dead. They were then taken into the woods where they were kept for several months. During this time they would fast and then consume a decoction of intoxicating roots. At the completion of the huskanaw the young men were reborn and returned to their villages. In this way, the boys ended their lives as children and emerged as adult men, full members of the society; and their mothers grieved over the lost relationship with their children.

The Indian tribes along the Atlantic coast were not isolated from one another.  Consequently there was active trading along the coast as well as with the inland tribes. Among the Virginia Algonquians, for example, exotic items from outside of their area, such as copper, were important. Beads made from seashells were an important trade item. Tubular beads, which the English colonists called wampumpeak and dark-colored beads had greater trade value than did disk-shaped beads and white beads.

Among the Virginia Algonquians, pottery was made using a coiled technique and the clay was tempered with crushed shells or quartz.  The pottery was often decorated with fabric impressions.

Among the Virginia Algonquians, the women made baskets of yucca fiber and Indian hemp. In addition, they also made mats from reeds, yucca, and the inner bark of trees.

During the summer, the men usually wore a plain loincloth and moccasins. Women would wear an apron-like skirt at the waist and would often wear a cloak clasped over one shoulder, leaving one breast exposed. Dress varied according to social status and everyday dress was different from ceremonial dress.

Both men and women were tattooed on the face, wrists, and legs. The leg tattoos usually circumscribed the leg at the calf. Tattoo designs could be geometrical or floral.

With regard to hair styles, Virginia Algonquian men usually shaved the right side of the head to keep their hair from getting tangled in the bow string. Married women would cut their hair below their ears while girls would shave the front and sides of their heads and wear the remaining strands of their hair in long braids.

One of the characteristics of the social organization of the Virginia Algonquians was social stratification based on the accumulation of wealth. While status and wealth could be acquired by everyone through war deeds and individual economic capacities, the chiefs and their advisers favored social stability  and thus restricted mobility in a number of ways. For example, they required tributes amounting to great parts of the economic yields to be paid to the chiefs for the support of their families and the priests. In addition, the chief’s fields were worked by the common people. While trade provided the opportunity to acquire wealth, in practice the trading monopolies reserved profits for the ruling class.

At the time the English landed in Virginia, the largest Indian group was the Powhatan Confederacy (sometimes referred to as an Alliance rather than a Confederacy). The leader of this confederacy was a strong chief (which the English would later crown as a King). The leader of the Powhatan Confederacy also took the title Powhatan as his name. (This makes the historical record a little confusing for it is not always clear if writers are referring to the person or to the nation).

The early English writings about the Powhatan indicate that there were at least 35 tribes which were affiliated with the Powhatan Alliance. These tribes included the Powhatan, Pamunkey, Mattaponi, Nansemond, Apamatuk, Paspahegh, Arrohatoc, and Youghtanund. English maps show 161 towns, villages, and hamlets within the area controlled by the Powhatan.

The name “Powhatan” can best be translated as “People of the Dream-Vision”. The term “powa” indicates dream or vision. When used as a title, “Powhatan” means “person who dreams,” or “Principal Dreamer.”

While Powhatan had extensive authority, he ruled with the advice and support of his people. A council of chiefs and spiritual leaders provided him with advice. Powhatan had the power of life and death and there are several recorded examples of his having people put to death for various offenses.

It is important to realize that the government of the tribes within the alliance, and the Powhatan alliance itself was not a patriarchy in the English style. Women had a strong voice in governmental and political affairs. They were responsible for distributing all food, including the game which had been killed by men. In addition, they had a voice in selecting their leaders, some of whom were women.

The actual confederacy was formed of several tribes which had been conquered-militarily and/or economically-by the Powhatan. Under the Powhatan Confederacy, the leader of each of the conquered tribes – called a werowance – served at Powhatan’s sufferance. The position of the werowance was usually inherited matrilineally. The position would go first to the brothers of the deceased chief and then to the eldest sister and her sons.

It is not clear how loyal many of the “conquered” tribes were to the Powhatan. For example, The Chickahominy – a nation of about 15,000 people in 1607 – maintained independence from the Powhatan even though they were surrounded by Powhatan tribes on three sides. While the Powhatan sometimes hired Chickahominy warriors and the Chickahominy did pay some tribute to Powhatan, they never allowed Powhatan to place a werowance over them. They governed themselves with a council of eight elders.

The Powhatan conducted wars of conquest in which the conquered tribes were incorporated into the Powhatan Confederacy. Strategies of surprise and ambush were more common than set battles between two fixed groups.

While the Powhatan could field an army of more than a thousand warriors in two or three days, large scale attacks were rare.  Powhatan archers could shoot accurately to about 40 yards and would send volleys to 120 yards. A typical archer could fire five arrows in the time it took a European soldier to load and fire a single musket shot.