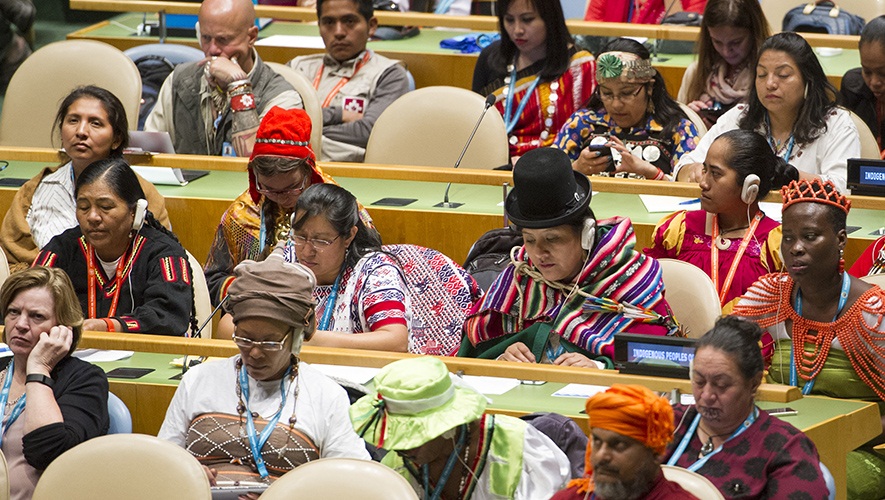 On Wednesday, November 17, representatives from the   UN Permanent Forum on Indigenous Issues came to Fairleigh Dickinson in Teaneck for an informative lecture and film presentation.  The main speakers were the Chair of the Permanent Forum as well as Ms. Tonya Gonnella Frichner of the Onandaga Nation, a current member of the UNPFII.

The focus was on how the UNPFII is structured to help indigenous peoples all over the world deal with issues ranging from genocide to near-slavery to the theft of natural resources.  It was a clear-eyed look at the power, and the limitations of what the UN can do.  The film shown, is available here.

For example, the UN often is the ONLY recourse for indigenous people who are being oppressed by their own governments. That is the nature of the conflict, the powerful oppressing the powerless.  Usually because the indigenous peoples were shepherding and caring for their environment and living in concert with the land for millennia, that land is now the majority of the land that is now unspoiled by development, and a large natural target for the greedy eye of developing nations and multi-national corporations, who have no allegiance to the countries they exploit.

The dilemma of the indigenous people is dire without the aid and intervention of the UN Permanent Forum of Indigenous Issues.  The Forum was made Permanent because of the incredible importance of protecting the human rights of people around the world.  We think of indigenous here as meaning Native Americans, but there are over 70 countries around the world with indigenous populations under similar and constant threats to their very existence.

An interesting point brought up by the Chairman of the UNPFII was that once world opinion turns on a practice by a country or multi-national, the World Bank, which finances development around the world, can weigh in, and refuse to fund development that destroys indigenous land and resources.   That is one way in which the pressure brought to bear by the UNPFII can have a monetary impact.

There is also the office of the Special Rapporteur.  This office is charged with investigating human rights violations against indigenous peoples and working to formulate solutions among all the agency bodies involved.

As I sat in the audience listening, I was having a flashback to April of this year when the Red Chief of the NJ Sand Hill Band of Lenape Indians, Dr. Ronald Yonaguska Holloway appeared before the UNPFII and addressed the General Assembly.  Chief Holloway is practically the NJ poster child for exactly how the UN works to help indigenous peoples all over the world.  Being oppressed by the Government of NJ and threatened with being historically wiped out because of the NJ Indian Commission stacked with folks who either aren’t indigenous to NJ or are not even a real Indian Tribe, they are being denied a voice in Government even though the Department of the Interior as well as The Smithsonian, has for years considered the Sand Hill the very last continuously operating indigenous Lenape tribe left in NJ.  Chief Holloway appealed to the UN when the courts in NJ would not let his lawsuit against the state proceed even to discovery – let alone a real trial.  The UN responded and took up his case and allowed him a voice at the Forum in April.  That was the starting point for real dialogue which is now taking place.

The event on the November 17th was an important one.  The room was packed with College students, local residents interested in the issue, professors of political science and history, and only a few Native Americans.  Many in the room were just being introduced to the issues being discussed, which is a major step forward. Too often indigenous issues are not known among the larger community – but the UN and Fairleigh Dickinson hope to change that.

Chief Holloway politely raised a hand to ask just two questions.  Chief Holloway introduced himself and expressed greetings from the other Chiefs who could not attend, upon which Ms. Frichner expressed how pleased she was he was able to be there and that she was honored to be in his presence.  It was very different than how  I observed Chief Holloway being treated at the NJ Indian Commission, which still refuses to recognize his tribe and is the source of his complaint with NJ.

The first question Chief Holloway asked was if the US had reached out to the UN to even start to address the 500 tribes still in the United States that the government has not yet negotiated with to solve the “Indian Problem”.  The answer, sadly was “no”.  The US is now the ONLY country who has NOT signed on to the UN Declaration on the Rights of Indigenous Peoples.

Chief Holloway’s  next question had to do with the fact that although the event that evening was fabulous, he expressed regret that he only learned of it just before he was about to board a plane that day.  He only found out about it because his government liaison read about it in the local paper. Perhaps there could be better communication with the NJ tribes. It all made sense to me just then.  The “Indigenous” person who greeted the crowd was none other than Dwayne Perry, the colorful CEO of the Ramapough Mountain people, who fancies himself a Chief, even though he is CEO of a non-profit corporation.  The Ramapough formed a non-profit corporation in the 1970’s. According to the Smithsonian, up to that point they were a mestizo group of Dutch, African, and mixed Native American blood who lived in a close knit community called the Jackson Whites.  For that reason, the Federal Government does not recognize the Ramapough as a tribe in the legal sense, because they are actually not a tribe. The NJ courts also consider the Ramapough simply a non-profit corporation, not a tribe, and certainly not a “Lenape Nation”.

Unfortunately, the head of the NJ Indian Commission is a member of the Ramapough.  Therein lies the problem, it appears that a fake Indian tribe is preventing the real one from any representation in government.

I ran into an organizer for the event who came up to Chief Holloway afterward and said that she saw him speak at the UN in April and that she very much wanted to get him for this event only to be stymied at how to contact him.  Ramapough CEO Dwayne Perry knows darn well how to contact Chief Holloway, which may explain why Perry seemed so distracted to see Chief Holloway staring back at him from the second row directly in front of the podium.  Had Perry perhaps been secretly trying to prevent Holloway from coming to an event of this magnitude?  Was Perry perhaps thinking he’d be the only NJ “Indian” in the room besides his Ramapough friend who played a small drum during the opening prayer?  That may explain why, when a real Lenape Indian Chief showed up, CEO Perry instantly became the incredible shrinking man.  His rambling incoherent question during the question and answer session, further gave the appearance that Perry was thrown.  There are enough governmental/organizations who know Chief Holloway and by association must know his story –  that “Chief” Perry is not a real Indian Chief and his tribe is not technically a tribe but a Native American entity, and friends of his who sit on the Indian Commission are at the heart of Chief Holloway’s very complaint.

The history of Chief Holloway’s tribe is being systematically wiped out by a group of folks who appear to be trying to steal it and claim it for their own with the blessing of the government of NJ.  They had almost once again succeeded in keeping the real last Lenape Tribe from being seen or heard from. Once again, fortunately, they had failed.