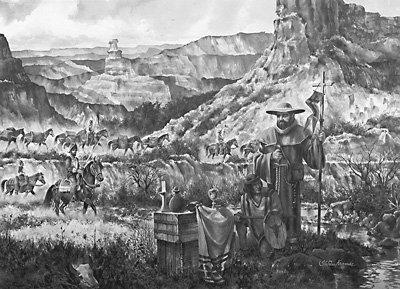 During the early sixteenth century there were many fantastic stories circulating among the Spanish which told of fabulously wealthy cities north of Mexico. These cities, according to the stories, had more gold than the Aztecs or the Inkas, and they were ripe for conquest by the superior Spanish warriors. In 1539, Fray Marcos de Niza, a Franciscan missionary adept in native languages, received permission from the Spanish Crown to explore what is now the American southwest and to determine if the fabled riches actually existed. Before embarking on his journey,   Spanish Viceroy Antonio de Mendoza told Fray Marcos de Niza that

“you must explain to the natives of the land that there is only one god in heaven, and the emperor on earth to rule and govern it, whose subjects they must all become and whom they must serve.”

The rumors about fabulous cities of gold came from several sources. Sometimes it was the Indians who spun these tall tales, perhaps to deflect Spanish interest in enslaving their own people. Sometimes the tales came from other explorers who returned with tall tales about what they had seen. One of these earlier explorers was Cabeza de Vaca who reported that he had heard many stories of wealthy American Indian cities. Among those who accompanied Fray Marcos de Niza was Esteván, the black slave who had been with the Cabeza de Vaca expedition a decade earlier.

Near the present-day city of Hermosillo, Sonora, Mexico, the expedition encountered some Pima Bajo who gave them a warm reception and much food. They told the Franciscan of a valley with many large settlements where the people wore cotton (probably the Pima and Opata). In reference to their mica pendants and their pottery made from mica-bearing clay, Fray Marcos thought that the Indians were telling him about people to the north who had pendants and vessels made of gold and silver. Many of the stories told to the Spanish probably contained grains of truth. However, by this time the Indians, especially those of northern Mexico, had learned to tell the Spanish invaders whatever they wanted to hear.

After hearing the stories about what he felt described the mythical Seven Cities of Cibola Fray Marcos sent Esteván with an advance party to investigate this possibility. They followed a well-established trading route that connected northern Mexico with the American Southwest. Esteván reached as far north as Zuni Pueblo in New Mexico, where he was killed.

While at a Pima village on the Rio Magdalena in Sonora, Mexico, Fray Marcos was told about three other kingdoms: Marata, Acus, and Totonteac. The Pima went to these three kingdoms and to Cibola to trade for turquoise, buffalo hides, and other things. Fray Marcos continued his journey north, into Arizona, encountering many settlements. Along the Salt River, he noted that there were villages every half or quarter league. The irrigated fields reminded him of gardens. He continued to hear stories about Cibola and about Marata. He was told that Marata had been reduced because of warfare with Cibola, but still remained independent. The kingdom of Totoneac (probably the Hohokam) was described to him as the largest of the kingdoms and that its people wore clothing of wool which was obtained from wild sheep.

As Fray Marcos continued his journey toward Cibola, he noted that he was traveling on a wide and well-used road that was lined with many shacks used by the people who journeyed to Cibola. Outside of Zuni, he was told that Esteván had been killed. His Indian escorts refused to travel farther, and so Fray Marcos turned back. Before leaving, however, he took possession of Cibola for the Spanish king by erecting a pile of stones with a small cross on top. While Fray Marcos never reached Zuni, he still described it as being bigger than Mexico City. The stories that Fray Marcos brought back inspired more Spanish interest in the Southwest and resulted in other expeditions seeking the fabled gold cities.

Indian Resistence to the California Missions