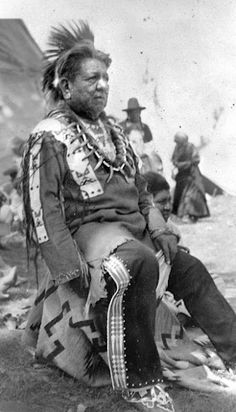 Among the Omaha there are two objects which are sacred to the tribe: Sacred Pole or Venerable Man and the Sacred White Buffalo Hide. These two sacred objects and their pipes occupy the center of the camp circle during times of tribal ceremony. The Venerable Man has been with the Omaha for several centuries: he was with them when the Ponca were still a part of the Omaha. He signifies the unity of the Omaha people.

The most important ceremony involving the Venerable Man is Anointing the Pole. The pole is set up at a 45-degree angle facing the north star. The traditional ceremony involved in greasing the Sacred Pole each year and was a ceremony of thanksgiving for the gifts received from hunting.

In 1888, ethnologists Alice Fletcher and Francis La Flesche (Omaha) persuaded Yellow Smoke, the keeper of the sacred pole of the Omaha – the Venerable Man – to send the sacred object to the Peabody Museum in Massachusetts for safekeeping.

Recognizing that the ethnographic significance of the Venerable Man would be greatly reduced without a precise and detailed account of the ritual songs and sacred stories associated with it, they also persuaded Yellow Smoke to speak of these things and to allow the story to be recorded. Yellow Smoke was hesitant to speak of these things as this was punishable by the supernatural. However, Joseph La Flesche (Iron Eye), the father of Francis La Flesche, agreed to accept for himself any penalty that might occur following the revealing of these sacred traditions.  After Yellow Smoke finished telling the story, Iron Eye became ill and died two weeks later.

Joseph La Flesche had opposed traditional ceremonies and advocated assimilation into American culture. As the principal Omaha chief he had refused to support the annual renewal ceremony  (Anointing the Pole) for the Venerable Man. Following this he developed an infection in his leg which resulted in its amputation. Traditional Omaha feel that this was a result of his refusal to participate in the ceremony.

A century after the Venerable Man left the Omaha people to live in a museum basement, he returned to them. In 1989, Harvard’s Peabody Museum returned the Venerable Man to the Omaha tribe at the tribal powwow in Macy. The Omaha brought him back hoping that his return to the tribal circle would bring all his relations “blessings for a long time to come.”

In 2000, the Venerable Man was set upright in accordance with Omaha traditions in a special Plexiglas case at the University of Nebraska. He will return home to the tribe when the tribe can afford to build a museum to protect his fragile wood.