…the continuation and preservation of traditional Native American Religion is ensured only through the performance of ceremonies and rites by tribal members. These ceremonies and rites are often performed on specific sites…These sites may also be based on special geographic features…For most Native American religions, there may be no alternative places of worship since these ceremonies must be performed at certain places and times to be effective. 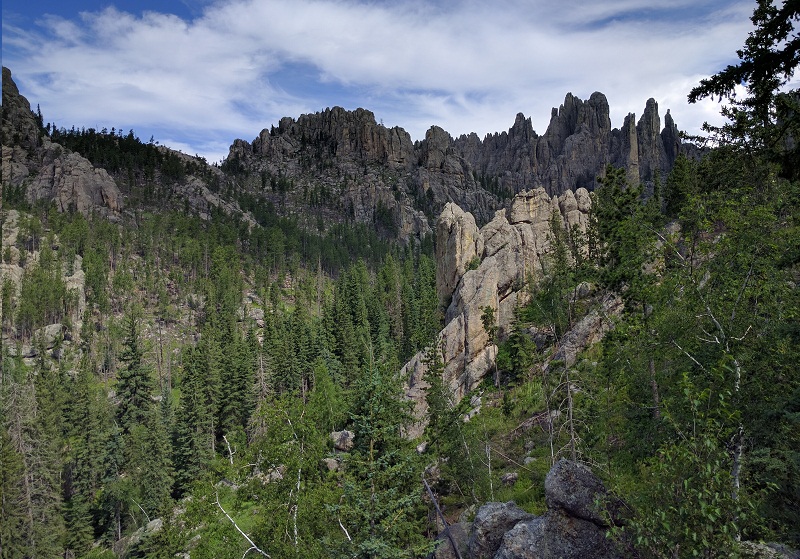 Such is the case at Pe Sla, “one of the five primary sacred sites in the Black Hills to the Lakota nation.”

The Pe Sla is one of the five primary sacred sites in the Black Hills to the Lakota nation because of its position on their annual pilgrimage/journey of prayers and ceremonies.  It is also the only one held mostly in private hands as others are within state or federal property.  This prairie has only known cattle grazing by a handful of ranchers since the Homestead Act.  Now subdivisions are encroaching upon this one pristine open space left in the Black Hills.

I can not speak for any tribe and here is my opinion. I think the ACLU should be seriously considered in terms of asking them to sue the appropriate parties over suffocating the religious freedom of the Lakota Nation to start with. I’m “seeking a way to protect this place,” so I didn’t mention cultural genocide.

(emphasis and underline mine)

When the Forest Service was asked about a cabin being renovated as a memorial to the ranching history on the Pe Sla, the questioners reminded them that there was a much longer history of this site among the Lakota.  The Forest Service representative told us that the Lakota elders with whom they consult told them no one wanted that information known.  A few months later when an official from the county government was standing on Rochford Road that runs through the middle of the Pe Sla or Reynolds Prairie, he exclaimed with great satisfaction that “soon this road will be a black ribbon (paved with asphalt) and this prairie will be a sea of houses”.
Unfortunately, it is only a matter of time that further abuse and possible desecration will take place so that we must tell the story of this sacred site.  Action must be taken to preserve this prairie for future generations.

• Please pray for its preservation and for the awareness of its spiritual significance to all people.

• Please tell the story to all whom you know.

Please show your support by seeking ways to protect this place.  Some of those possibilities are outlined below.

Furthermore, I think Joe Garcia, President of the NCAI, should be contacted by the ACLU in order to proceed in the manner which would not damage tribal sovereignty in any fashion what-so-ever.

The ACLU could do a fund and membership drive revolving around this, which would hopefully increase their membership and help raise finances for the case. Everything considered, what are the other alternatives?

The Pennington County Highway Department held a meeting regarding the reconstruction of South Rochford Road at Hill City, SD, on Monday, March 3, 2008, at 6:30 pm. This project runs from Deerfield Lake to the village of Rochford passing through the middle of Reynolds Prairie, or the Pe Sla, one of the most important and sacred Lakota annual pilgrimage sites. Currently it is a gravel road but the plans are to asphalt eleven (11) miles of road with $7.5 million dollars. If the road is blacktopped, housing development and increased traffic will occur. The Hill City Chamber of Commerce is pushing this project.

If they were considering condemning hundreds of churches for the sake of “development” or uranium for that matter, we wouldn’t even be having this discussion; a discussion that both Obama and Clinton should have in South Dakota and Montana.

“Montana and South Dakota are scheduled to hold Democratic primaries June 3. No other state is having a primary that week. In fact, there are no Democratic state contests in the two weeks leading up to June 3. With more than 125,000 citizens who identify themselves as American Indian in these two states, I believe we should urge the Obama and Clinton campaigns to come to an Indian reservation in Montana or South Dakota to debate Indian country issues.

To conclude and once again, “It is only a matter of time that further abuse and possible desecration will take place so that we must tell the story of this sacred site.  Action must be taken to preserve this prairie for future generations;” and, if they were considering condemning hundreds of churches for the sake of “development” or uranium for that matter, we wouldn’t even be having this discussion.

Pe Sla in Black Hills to be “Sea of Houses” (UPDATE)

Uranium Mining almost near Grand Canyon and is Elsewhere!