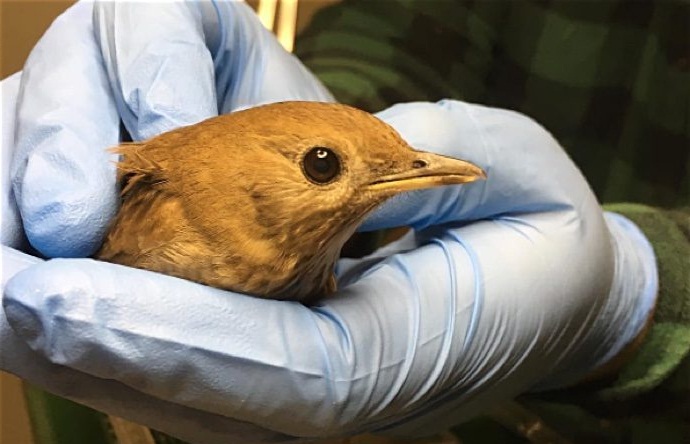 Tonight I had the task of euthanizing a bird that had been hit by a car at the age of three months old.  His injury prevented him from being released back into the wild, as his wing, even after veterinary care, did not heal with the proper alignment that would allow him to be a successful hunter in the wild.

Us folks, who take in these injured raptors, have to make a decision as to whether to place these birds into educational institutions, or whether to euthanize them, as many of certain species (understandably) do NOT want to live with humans.

His name was Sky, and he was a Red-shouldered hawk, a species generally considered to NOT be one to keep in captivity.

Our own excuse for adopting him into our program was that we actually HAD a Red-shouldered hawk (SQUIRT) in our program, who defied all of these generalizations.  He was a star in our program.  He was mellow, tolerant, playful, interactive, and even courageous enough to jump into our pond to swim around (yes, a hawk, swimming, if you can imagine it).  When we had him out, he’d chase moving sticks, interacted with gophers waiting to play games with him, etc. etc.  And he loved us all, and so did we.

He died 3 years ago of a heart failure.

We missed him very much, and when an opening for an adoption of another Red-shouldered hawk came up for us, a three-month old fledgling, who had run into a car, and one of his wings was never going to allow him to survive in the wild,  we adopted him into our program.

It turned out he was nothing like Squirt.  Squirt had fallen from his nest only a week or two after he hatched, and was basically raised by humans.  He had nor fear of us, and identified with us, trusted us.

Sky, on the other hand, had been raised by his wild parents for three months before he had the run-in with the car.

He KNEW he was a Red-shouldered hawk, and nothing could convince him otherwise.

We tried for two and a half years to convince him otherwise, but it was no good.  His agenda was clear.  Nothing more than freedom and full reign would do.  7 of us tried everything on earth to try to build trust, but we eventually accepted that it wasn’t about building trust – it was about him being a Red-shouldered hawk, and his own mission.

So tonight, in his honor, with my prayers, with my love, and with the support of all the people who have worked with him over the last 2 years, I euthanized him, along with our prayers.  I do believe he’s coming home to where he belongs.

And the next time I choose a bird for our program, I’ll be much more careful.

AND, to let you know – Sky is the ONLY bird in my program we’ve ever had to face with this decision.

All our other birds, Max, the Great horned owl, Ivan, the Red-tailed hawk, Kachina, the American kestrel, and Tecolita, the Western screech owl,

are all content.  Nevertheless, having to euthanize just ONE of all the ones I’ve cared for, is heart-breaking to me.