During the nineteenth century it was commonly believed by non-Indians that American Indians and their cultures were destined for extinction. Government policies were often based upon this assumption and were intended to extinguish Indian cultures. While American Indians-their cultures, their nations, and even their reservations-endured into the twentieth century, they are often absent from twentieth century histories. Some of the events which were transpiring in Indian country in 1911 are described below.

“Whence they came and when we know not, but if we are to judge from their stature, features, color, language, art, music, and many of their characteristics, we would be convinced that their ancestors were of Asiatic origin. There is evidence that they acquired control of this continent by conquest, rather than by peaceful means.” 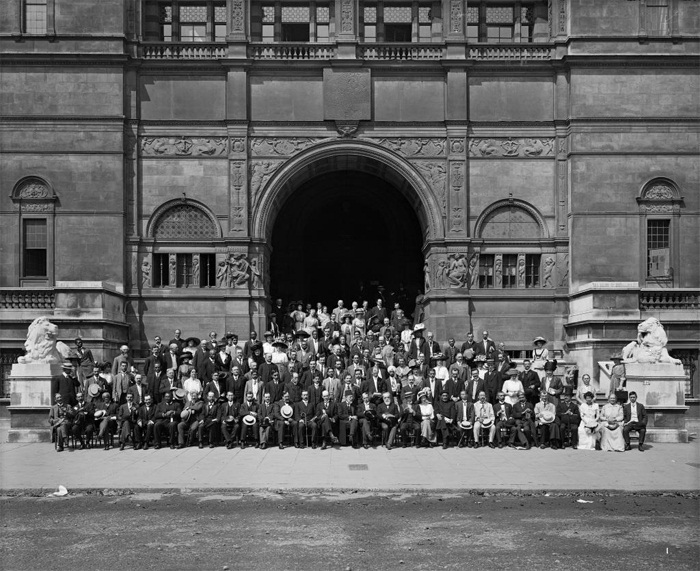 “It was a great privilege to attend that gathering of distinguished representatives of 53 different nationalities, come together to mutually acquaint themselves with one another’s progress and racial ideals.”

“The evil seems to be that the Indian Bureau administers as if the Indian was selected for their benefit, to exploit them, and not they that were created for the benefit of the Indian.”

The Society of American Indians was a pan-Indian group that was created as a part of the progressive feeling that swept through American politics during the first few decades of the twentieth century. They lobbied for the creation of a national Indian day and they fought against the use of terms like “buck” and “squaw”. The SAI pushed for national Indian reform that the members felt would result in the full integration of American Indians into American society. They were dedicated to the idea of participation in American society as well as the maintenance of their own cultural and/or racial identity.

For non-Indians, the existence of an organization composed of Indian doctors, engineers, teachers, and other professional people helped generate more respect for Indian people.

In Washington, DC, Indians gathered on the steps of the Capital building to protest the way motion pictures were portraying their people.

In Oroville, California a man appeared who was speaking a language foreign to all who heard it. Anthropologists from the University of California at Berkeley were called in and determined that the man was speaking Yahi (also called Southern Yana), a language which was believed to be extinct. The man was called “Ishi” (which means “man” in Yana as he could not reveal his real name) and for the next five years he would live at a museum in California as a living encyclopedia of Native Californian information.

In South Dakota, a federal Indian agent rounded up Indians who were involved with peyote ceremonies and jailed them with no legal authority.

On the Pine Ridge Reservation (Oglala Sioux) in South Dakota, Harry Black Bear asked the Bureau of Indian Affairs for permission to use peyote in a Native American Church ceremony. The request was denied.

In Montana, the Bureau of Indian Affairs informed the Northern Cheyenne that they could not continue holding their Willow Dance or any other dance of a ceremonial nature. The BIA told them:

“you cannot continue your Willow dance and animal dance without doing great injury to your health and various industries.”

Colorado Springs, Colorado invited a group of Ute to be a part of an exhibition at an 8-day carnival. The Indians, who were now off-reservation, performed dances and other ceremonies that were not only discouraged, but considered illegal at their reservation. The events, while not favored by the Commissioner of Indian Affairs, were popular with those attending the event.

In Washington, Americans were looting Palouse graves for curios which they then sold in Eastern markets. Chief Big Sunday led a delegation to Walla Walla where they appealed to a judge to stop the vandalism. The judge ruled against the chief.

In Ohio, the Moundbuilders Country Club was established on the site of the Octagon Earthworks, an important archaeological site. The course zig-zags through the Hopewell earthworks which were built around 250 AD. The 6th hole, called “Minnie-ha-ha” incorporated one of the small burial mounds.

An oriental style, based on oriental rugs, was introduced to Navajo weavers in Arizona and New Mexico. Since oriental rugs were popular among urban Anglos, it was felt that the “oriental” Navajo rugs would also sell well.

Navajo weaver Hosteen Klah wove a blanket of yeibichai dancers which portrayed sacred masks. Local singers (medicine men) felt that this was sacrilegious and demanded that Klah have a ceremony to expel the evil and that he destroy the weaving. Instead, Klah sent the weaving to Washington and experienced no negative effects.

J. Capps and Sons, calling itself “Blanket Maker to the Indian Tribes”, marketed its blankets to non-Indians by telling them that

“To acquire a Capps blanket and display it in your home was to own a piece of the vanishing romance of the American west and to achieve the blissful harmony of the Noble Red Man.”

The Boy Scouts of America gave formal recognition to achievement in Indian lore activities with its Indian Lore Merit Badge.

In Montana, the state legislature declared that anyone who was living on an Indian reservation who had not previously acquired Montana residency in a Montana county prior to moving to the reservation would not be regarded as a Montana resident. Thus, most Indian citizens were not eligible to vote.

North of Golconda, Nevada, a sheriff’s posse killed eight of the twelve members of a Western Shoshone band under the leadership of Shoshone Mike (also known as Salmon River Mike). The incident began when the Shoshone were accused of killing four stock men. They were pursued by a posse over 200 miles in the winter.

The Shoshone were camped in Little High Rock Canyon. One of the posse members, Frank Perry, would later recall:

“Their camp was situated about three hundred feet above the floor of the Canyon, under an overhanging jet of rim rock which offered them protection against storm, and any kind of attack that might ensue.”

They had killed some cows for food and when a party of Basque sheepherders investigated the dead cow, the sheepherders were attacked and killed.

The sheriff’s posse tracked the Shoshone for ten days before they caught up to them. The posse was spotted by a Shoshone woman and shooting started. The Shoshone soon ran out of ammunition, and then, armed only with bows and arrows, they made a final charge against the posse. Among those killed were a toddler and a baby. The posse reported fighting against Shoshone women who were using bows and arrows and throwing stones at them.

The members of the posse stole $26 and a pocketknife from the dying Shoshone Mike who had been shot at least six times. Shoshone Mike’s skeleton was later obtained by the Smithsonian Institution for its collection.

In Oklahoma, the Chiricahua Apache were still being held as prisoners of war. Reverend Walter C. Roe of the Reformed Church in America described their situation:

“The men are subject to orders; their affairs are under the direction of others; they cannot leave the reservation for more than 24 hours without permission; they cannot marry outside of their band, because no one wants to enter their condition of captivity; in fact, for the most far-sighted and intelligent among them there is no light ahead.”

“All we want is to be freed and be released as prisoners, given land and homes that we can call our own.”

The army used the area as an artillery range and notified the prisoners that shelling would not stop for livestock. While the Apache had been told that this would be their permanent home, the army had no intention of abandoning the post and thus the Apache must remain prisoners. While the United States government had promised the Apache that they would have permanent residence at Fort Sill, the War Department determined it was in the nation’s best interest to retain Fort Sill as an army field artillery school. Thus the army did not feel it was bound by any promise made to the Apache prisoners by the federal government.

In Minnesota, investigators looking into allegations of fraud and corruption in the allocation of timber lands on the Chippewa White Earth Reservation found that many entries showed evidence of tampering. Some entries had been penciled in early and then traced over in ink on allotment day. The investigators found that a conspiracy had existed in which the Indian agent cooperated with lumber corporations so that certain approved individuals acquired valued timber lands.

In Oklahoma, the McCurtain County probate court judge and other court officials were implicated in land fraud regarding Indian lands. The fraud included: charging exorbitant fees to administer the estates of allottees, as much as ten times what whites paid for the same services and in some instances nearly what the entire estate was worth; children being allowed to die by guardians seeking to obtain their estates; and phony wills ‘signed’ by already deceased individuals but fully notarized and accepted as evidence in probate court.

The Soul of the Indian by Sioux writer Charles Eastman was published. He wrote:

“I have attempted to paint the religious life of the typical American Indian as it was before he knew the white man. I have long wished to do this, because I cannot find that it has ever been seriously, adequately, and sincerely done. The religion of the Indian is the last thing about him that the man of another race will ever understand.”

Eastman, who was a Christian, wrote of the missionaries:

“The first missionaries, good men imbued with the narrowness of their age, branded us as pagans and devil-worshippers, and demanded of us that we abjure our false gods before bowing the knee at their sacred altar.”