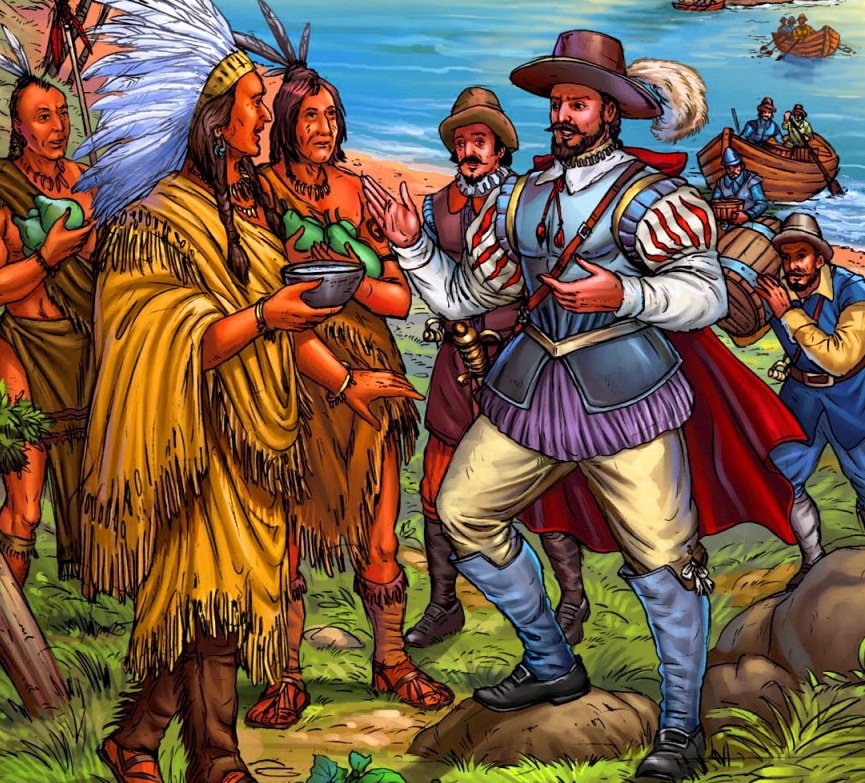 From the Native American perspective, the sixteenth century marked the beginning of the European invasion. The first Europeans to contact the Native nations were explorers, adventurers, soldiers, and missionaries who were seeking personal glory, gold, and souls for their god.

The European myth of the Americas, often written in the form of histories, would later describe the continent as a wilderness waiting to be conquered. In reality, there was no wilderness: the Americas were settled lands, populated by people who had been developing it for thousands of years.

In North America, the major sixteenth-century European nations who were attempting to invade the continent included Spain, France, and England. In addition, a European ethnic group, the Basques, were also a major presence in what would become Canada.

During the sixteenth century, the Basques would set up summer camps on the east coast. In an article in Smithsonian, Anika Gupta reports:

“They fished cod and hunted whales, harvesting the meat and oil to sell in Europe. Historians have frequently overlooked the Basques because unlike the British, French, and Dutch explorers, the Basque interest in the New World was purely commercial.”

The Basques didn’t plant flags, they didn’t claim land, and they didn’t impose imperial rule. In general, the Inuit and the Basques had little direct interaction. Anika Gupta reports that

“when the whalers returned to Europe each winter, the Inuit raided the abandoned Basque shore stations for small boats, iron weapons and cookware—and sometimes burned down the work sheds to retrieve nails.”

The sixteenth century marks the beginning of trade between the Europeans and Indian nations. From the Europeans, Indian people began to obtain horses, firearms, alcohol, and other trade goods. From the Indians, the Europeans obtained slaves, tobacco, corn, furs, and some gold.

By 1519, European fishing boats were trading with the Micmac in Maine and the Maritime Provinces.

It should be pointed out that trade was not a new concept to Native Americans: their trade routes cross-cut the continent from east to west and from north to south. Many, if not most, of the early traders, explorers, and missionaries followed well established Indian trade routes in their initial penetrations into Indian country.

At the beginning of this century, the European nobility used furs not only to keep warm, but also to show off high rank and wealth. The fur-bearing animals of Europe had been hunted to extinction and furs were being obtained from the Russians. Some of the “Russian” furs were actually Indian furs. According to William Haviland and Marjory Power, in their book The Original Vermonters: Native Inhabitants Past and Present:

“Many were obtained by the Russians through trade with the nomads of central Asia who, at least from the time of Marco Polo, were linked to an extensive trade network extending ultimately over the Bering Straits into Alaska.”

Many European entrepreneurs realized that there was money to be made in the fur trade. In his book History of Canada Before 1867, Gordon Stewart reports:

“The Europeans wanted fur, especially beaver pelts, which were excellent for making hats and fetched a good price on European markets at a time when there were difficulties with the Baltic and Russian trade in pelts. For the French, beaver pelts proved to be the equivalent of silver or gold or sugar as an economic incentive to colonization.”

With regard to the early fur trade between Indians and Europeans, historian Karen Ordahl Kupperman, in her essay in North American Exploration. Volume 1: A New World Disclosed, writes:

“Such encounters brought the Indians the metal tools, cloth, and other useful goods they could not manufacture for themselves, so they were eager to establish trade.”

In the beginning of the economic exploitation of the Americas by the Europeans, one of the goods sought by the Europeans was Indian slaves. In 1519, the Catholic Bishop Juan de Quevedo declared that Indians were slaves by nature because some people were by nature inferior.

For the Europeans, the Americas were unknown, uncharted lands. During the sixteenth century, a number of European exploring expeditions attempted to chart the sea routes and lands and to assess the economic potential of the area. In 1519, Spanish sea captain Alonso de Piñada sailed along the Florida coast and then up the Mississippi River for about 20 miles. He reported seeing about 40 towns along the river. This was not a wilderness, nor a land populated by roving bands of hunters: it was a settled territory whose inhabitants lived in villages and farmed the land.

There were an estimated 18 million Native Americans living north of Mexico at the beginning of the sixteenth century. With regard to the health of this native population, sociologist Russell Thornton, in his book American Indian Holocaust and Survival: A Population History Since 1492, reports:

“There are overwhelming indications that the peoples of North America and the entire Western Hemisphere were remarkably free of serious diseases before the Europeans and Africans arrived.”

“The near-absence of lethal pathogens in the aboriginal New World allowed the native people to live in almost a paradise of well-being that contrasted with their historic purgatory of disease. People simply did not very often die from illnesses prior to the Columbian Exchange.”

In 1519, a series of smallpox episodes struck the Native American population of Florida with a mortality rate of 50-75%. Henry Dobyns estimates that 361,000 Timucua died.

Reservations and Tribes a Century Ago, 1919