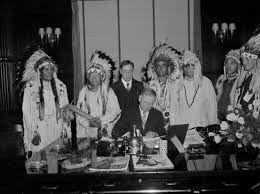 Indians, according to the non-Indian social philosophers, bureaucrats, and politicians of the nineteenth century, were going to simply disappear by the end of the century or in the early twentieth century. Many history books about Indians stop their stories at the end of the nineteenth century adding to the illusion that Indians somewhat stopped being Indians when the twentieth century was born. The reality of the twentieth century was that Indians didn’t disappear but increased in numbers. Briefly described below are some of the Indian events of 1919 which impacted tribes and reservations.

The Red Man in the United States, written by G. E. E. Lindquist for the Inter-Church Movement, documented poverty on Indian reservations. According to Vine Deloria and Clifford Lytle, in their book The Nations Within: The Past and Future of American Indian Sovereignty:

“The impact of Lindquist’s report on federal policy was minimal because it was written in the old-style missionary language and spoke optimistically about those Indians who walked the ‘Jesus Road’.”

In Arizona, as a part of the ongoing attempt to obtain rights to use plateau land for the Havasupai, their Indian agent reported:

“Last winter the Forest Service issued permits to several white cattlemen to graze their stock on the Indian Pasture. There is not feed and water to justify this and other motives behind this place it in the light of a dirty piece of business.”

The Havasupai’s ancestral homelands is in Cataract Canyon which is part of the Grand Canyon complex. Following the fall harvest (they raised corn, beans, squash, and melons) they would leave their villages in the canyon and live in temporary camps on the plateau.

In Minnesota, Harry and Jeannette Ayers opened a trading post for the Ojibwe near the Mille Lacs Reservation. They formed a close working relationship with the people.

In Utah, the Skull Valley Reservation for the Gosiute was enlarged by 17,920 acres by presidential executive order of President Woodrow Wilson. The traditional homeland of the Gosiute was south and west of Great Salt Lake. They lived in the Tooele, Rush, and Skull valleys.

Congress passed a bill providing enrolled Blackfeet in Montana an additional 80-acre allotment. Surplus land was to be retained by the tribe.

In Montana, German artist Winold Reiss made his first visit to the Blackfeet reservation. He later recalled:

“I had read books about how you must always approach an Indian with ceremony, but I just ran down and rushed up to the biggest, finest looking one, and slapped him on the back, and began telling him how I had come all the way to see my red brothers and paint them.”

The Indian, former warrior Angry Bull, did not speak English and had no idea what this German tourist was talking about. Finally, with an interpreter, Angry Bull agreed to pose for 50 cents an hour and cigarettes. Reiss painted 33 portraits during his three weeks on the reservation.

In Montana, a council was held among the Yankton Sioux on the Fort Peck Reservation to consider a call by non-Indian homesteaders for a reappraisal of Fort Peck lands. Grover Cleveland was elected as president and George Washington as secretary (it was common during this time for Indians to be given English names by non-Indians).

In Montana, the superintendent for the Northern Cheyenne Reservation leased 90,000 acres to an individual from New York who fenced off this area of the reservation. Anthropologist Gregory Campbell, in his chapter in The Political Economy of North American Indians, reports:

“All of the leasing profits were used to pay off the Northern Cheyenne debt (created by the Indian Bureau) and maintain agency daily operations.”

To illustrate the songs used in their ceremonies, the Navajo use sandpaintings or drypaintings. These are created by dribbling colors (made from charcoal and pulverized minerals) on the ground using the thumb and the first and second fingers of the right hand. In her chapter in Washington Matthews: Studies of Navajo Culture, 1880-1894, Nancy Parezo reports:

“In their proper setting, if ritual rules are followed exactly as prescribed by the Holy People, drypaintings are the exact pictorial representations of supernaturals who, called by their likenesses, are compelled to cure under the rules of the universe.”

Navajo weaver and singer (medicine man) Hosteen Klah began to weave rugs with sandpainting designs. His sandpainting rugs were based on the songs that he was qualified to sing. The Navajo singer or hataali must go through rigorous training to learn all of the songs and spiritual elements necessary to conduct a healing ceremony. The ceremony must be conducted perfectly for it to work, that is, the hataali must reproduce all of the extensive songs, prayer litanies, and sand paintings that are part of the ceremony exactly as they were learned, down to the smallest detail.

For some traditional Navajos, using sandpainting designs in a permanent medium was calling for spiritual disaster. Nancy Parezo reports:

In New Mexico, Navajo medicine man Hosteen Klah came down with the influenza. Recognizing the illness as the same one that had struck his great grandfather at the signing of the Bear Spring’s Treaty, Klah isolated himself saying:

“If I move about, it will spread all over the reservation and many will die.”

In Washington state, the special agent for landless Indians submitted a list of more than 4,000 names, most of which were not on any Indian roles. The agent divided the names into three groups: (1) Indians who had stayed in their aboriginal territory rather than going to a reservation, (2) allottees’ children who lacked their own allotments, and (3) descendants of Indian women who had married non-Indians.

In Wisconsin, the woman warrior Hanging Cloud died at the age of 84. Born into the Bear Clan at Rice Lake, she was the daughter of Chief Nenaa’angebi (Beautifying Bird) and Niigi’o. She was given the name Aazhawigiizhigokwe (Goes Across the Sky). In their book Native American Almanac: More than 50,000 Years of the Cultures and Histories of Indigenous Peoples, Yvonne Dennis, Yvonne Dennis, Arlene Hirschfelder, and Shannon Flynn write:

“Hanging Cloud was a full warrior council member, entitled to join war dances and ceremonies. Known as the fastest runner in her community, she hunted and participated in battles and raids, using weapons and war paint and eagle feathers tied with ribbons that indicated how many enemies she had killed.”

In Arizona, Lomahongyoma, the leader of the “hostile” faction of the Hopi village of Oraibi died.

Disease and Indians in the 16th Century