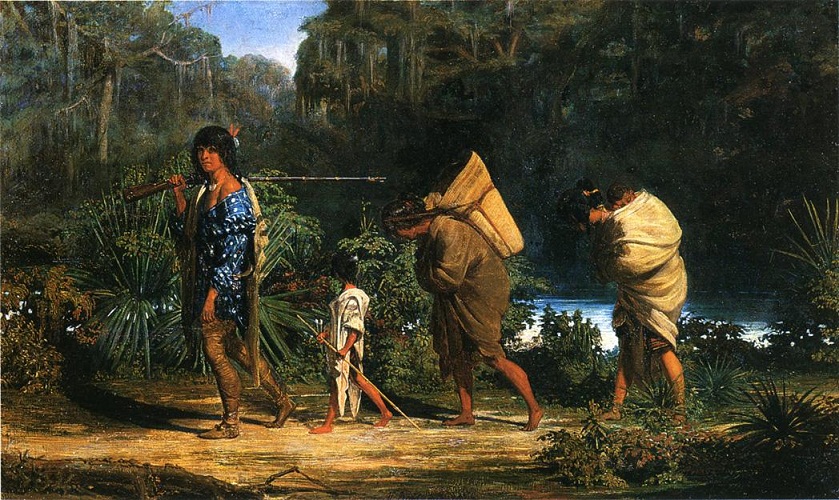 When the Europeans began their invasion of North America, they found that the Southeastern Woodlands area was inhabited by skilled farmers who lived in permanent villages.

After the formation of the United States at the end of the eighteenth century, five of the Southeastern Indian nations – Cherokee, Chickasaw, Choctaw, Creek, and Seminole – became known as the “five Civilized Tribes”. The designation “civilized” was an indication that they had acquired many elements of European cultures and were the most acculturated Indian tribes at the beginning the nineteenth century.

The Choctaws, at the time of European contact,were a loosely organized confederacy composed of three distinctly different divisions: Okla Falaya (Long People),Okla Tannap (People of the Opposite Side), and Okla Hannalia (Sixtown People). The people were living in more than 100 autonomous villages. In his chapter in Eating Fire,Tasting Blood: An Anthology of the American Indian Holocaust, Don Birchfield reports:

“Choctaws, premier agriculturalists, were descended from people who had been cultivating corn for about three thousand years.”

The Choctaws raised corn (maize), beans, squash, sunflowers, and melons. Choctaw agriculture was supplemented with some hunting and gathering of wild plants for food and fiber. While men generally hunted and women generally worked in the fields, this was not a rigid division of labor. There were times when the men helped with both the farming and the gathering of wild plants. It was not uncommon for girls to go with the men and boys on hunting expeditions. Older women usually stayed at home to tend the fields.

Choctaw oral tradition speaks of a time when they had lived to the northwest. However, their population increased, and the game grew scarce which forced them to seek a new home. Their migration was led by Chahta (also spelled Chah-tah) who carried a magical staff. Each night when they camped, he would place the staff upright into the ground. In the morning, he would inspect it and then he would lead the people in the direction in which the staff leaned. At the ancient mound of Ninih Waiya (“Leaning Mountain”) near present-day Philadelphia, Mississippi, the staff remained upright in the morning. Thus, it was here that the Choctaw settled. It was in this country that the Choctaw established their government.

According to one version of the story, a group of people led by Chikasa, Chahta’s brother, had camped on the other side of the creek. There was a heavy rain and flooding, following which the staff was still upright indicating that this is where the people were to stay. However, Chikasa’s party had proceeded on, not knowing that the promised land had been found. In his book The Removal of the Choctaw Indians, Arthur DeRosier writes:

“Many Choctaws maintained that this was how they and the Chickasaws became separate, though kindred, nations.”

The Choctaw migration story tells that the people traveled for 43 years and that during this migration they carried the bones of the ancestors. Choctaw historian Donna Akers, in an article in the American Indian Culture and Research Journal, writes:

“Many of the people carried so many bones that they were unable to carry anything else. Some were so overloaded that they would carry one load forward a half day’s journey, deposit it, and then return for the remainder.”

The task of carrying the bones was considered to be a sacred duty. According to one story, when the people reached their new homeland, the bones of the ancestors were piled high on the ground and then covered with cypress bark. This created the great mound known as Nunih Waiya (also spelled Nanih Waiya, Ninih Waiya, and Nunih Waya). In his section in The Native Americans: An Illustrated History, David Hurst Thomas writes:

“Thereafter the mound surface was planted with trees, and to symbolize the renewal and purification of their world, the Choctaws held their Green Corn dances here.”

Another variation of the story tells that the Choctaw were the first to settle near Nunih Waiya following their migration. After a while, however, there were some internal disputes and some of the younger warriors and hunters abandoned the people to settle in distant regions. In his book Choctaw Prophecy: A Legacy of the Future, Tom Mould writes:

“Thus, from the body of the Choctaw nation had sprung those other nations which are known as the Chickasaws, the Cherokees, the Creeks or Muscogees, the Shawnees, and the Delawares.”

With regard to the archaeological data about Choctaw migrations, Clara Sue Kidwell, in her entry on the Choctaw in the Encyclopedia of North American Indians, reports:

“Some of the ancestors of the Choctaws probably lived in northwestern Alabama in a large village that archaeologists now call Moundville.”

“Other ancestors of the Choctaws probably did come from west of the Mississippi.”