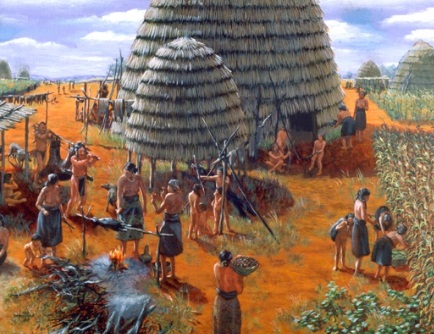 The traditional homelands of the Caddo stretched from the Red River Valley in Louisiana to the Brazos River Valley in Texas. The Caddo were agricultural people whose culture emerged about 800 CE. Caddo culture is considered to be related to the Mississippian mound-building cultures.

The term “Caddo” originates from one particular tribe, the Kadohadacho who occupied the area around the Great Bend of the Red River in Texas. Kadahodacho signifies “the real chiefs.” The term is also applied to a number of other tribes in the region who have a similar language and culture. According to archaeologist Timothy Perttula, in his chapter in Between Contacts and Colonies: Archaeological Perspectives on the Protohistoric Southeast:

“the Caddo peoples were a powerful group of related theocratic chiefdoms who exercised, through their political and religious elite, great political skill and trading savvy with their southeast U.S. Mississippean neighbors.”

In her entry on the Caddo in the Encyclopedia of North American Indians, Helen Hornbeck Tanner writes:

“The Caddo people formed the most western of the chiefdoms that attained peak development in the southeastern United States from the tenth to the thirteenth century.”

Today, the Caddo Nation consists of the descendants of approximately 25 once independent tribes that inhabited the area.

At the time of the first contact with the French and Spanish explorers, the Caddo were associated in three or four loose confederations. The largest of these was the Hasinai, which the Spanish called Texas, who occupied a territory which includes the present-day Texas counties of Nacogdoches, Rusk, Cherokee, and Houston. The Kadohadacho, also called the Caddo proper, were located at the bend of the Red River in southwestern Arkansas and northeastern Texas. The Natchitoches occupied an area near the present-day Louisiana city which bears their name. The least known of these early confederacies is the Yatasi which soon after initial European contact divided into two groups which affiliated with other Caddoan confederacies.

The Caddo raised corn, about six kinds of beans, pumpkins, sunflowers, gourds, and melons (including watermelons). Their fields were tilled with wooden or bone-tipped hoes. The Caddo planted two kinds of corn. One would mature in about six weeks and the other in about three months. The fast maturing corn would be planted at the end of April, about the time when the rains cease. This corn would grow to less than 3 feet in height, but would be covered with many small ears. Following the harvest of this corn, they would clear the fields and plant what they called the “big seed” (the longer-maturing corn).

In raising beans, the Caddo would make a small hill for the seeds and then place a stake in the ground to support the vines. Historian Willard Rollings, in his chapter in Cultural Encounters in the Early South: Indians and Europeans in Arkansas, reports:

“Although by themselves not nutritiously complete, corn and beans combined brought together amino acids essential for a balanced and healthy diet.”

With regard to sunflowers, one Spanish explorer noted that the Caddo

“cultivate certain kinds of sunflowers from which, after enjoying their beauty, they use the seeds, which are like little pine-nuts, and which, ground, they mix with corn, and form a dough, which they make into small cakes or tamales of good taste, and much nutriment.”

The Caddo also raised tobacco which they harvested before it was fully ripe.

The Caddo, long before the arrival of the Europeans, maintained some degree of political control over parts of Texas, Oklahoma, Arkansas, and Louisiana by controlling trade. The Caddo controlled the trade routes between the Southern Plains and the Eastern Woodlands. Trade that came through the Caddo included shells from Florida, copper from the Great Lakes, turquoise and cotton from the Southwestern Pueblos, and stone tools from Oklahoma and central Texas. According to archaeologist Rachel Feit, in an article in American Archaeology:

“The Caddo closely monitored people, information, and commodities moving through their territory, and guaranteed themselves access to diverse resources.”

Some important items in the Caddo trade were salt, fine pottery, bows, and wood for making bows. The wood for the bows was Osage orange or bois d’arc. Caddo-made items reached north to the tribes in Illinois and south to the Indian towns along the Gulf Coast. The early Spanish and French explorers among the Caddo also commented on their salt loaves which weighed about two or three pounds each. The salt was traded to other tribes.

At the time of first European contact, the Hasinai (a Caddo Confederacy) were holding a trading fair each fall. Trade at this time included items which had been plundered from Spanish outposts as well as turquoise and cotton blankets from the tribes to the west.

The Caddo made circular houses resembling bee hives which were up to 40 feet high and thatched with straw. The houses were made by placing log poles upright in a circular pattern and then thatching them. The hearth, containing a fire which never went out, was in the center of the house. This type of house would accommodate about 20 people. According to archaeologist Rachel Feit:

“Some houses had a hall-like entranceway that archaeologists believe indicated that they were residences of the elite or that they were used for social and religious rituals.”

Arranged around half of the typical Caddo house there would be a series of beds on raised platforms. Father Damian Massanet, writing in 1690, reports:

“At the head and foot of each bed is attached another carpet forming a sort of arch, which, lined with a very brilliantly colored piece of reed matting, makes what bears some resemblance to a very pretty alcove.”

In the parts of the house where there were no beds, there were shelves which held baskets of corn and other foods as well as pottery cooking pots.

Among the Caddo, many of the people lived in year-round sedentary, dispersed communities (also called rancherías) of a single farmstead with one or two structures and a small family cemetery. Smaller villages contained a number of houses and an open plaza area. A number of smaller villages were usually grouped around or associated with a larger village which served as a political, economic, and social center. In this village, the important public buildings were usually built on top of mounds which could be up to 30 feet high. Unlike the Mississippian mound-building cultures to the east, Caddoan villages were unfortified.

In warm weather, Caddo men would go naked and the women would expose their tattooed breasts. The Caddo usually went barefoot and used moccasins only when traveling.

The basic dress among women was a skirt which was made from deerskin or from material woven from the inner bast of the mulberry tree. In cold weather, both men and women would wear ponchos made from buffalo robes.

“Caddo men were noted for the nose rings they wore; they also lengthened the earlobes, into which feathers and other ornaments were inserted.”

Early descriptions of the Caddo tell that the entire ear lobe would be pierced for beads, feathers, and other ornaments.

The Caddo had a number of totemic clans: Beaver, Otter, Wolf, Lion, Buffalo, Bear. Anthropologist John Swanton, in his book Source Material on the History and Ethnography of the Caddo Indians, reports:

Caddo children were traditionally named six to eight days after birth. This first name was usually a diminutive of the name of the parents. The naming ceremony was done by an elder who held the child, bathed it, and then would ask the parents what name they would like to give it.

The Caddo represent the western-most group of the Mississippian chiefdoms. The hierarchical government was headed by the chinesi (also spelled xinesi) who functioned as a priest as well as a ruler. The chinesi presided over ceremonies which were carried out in temples on top of platform mounds. Caddo government was a theocracy in which the special status of the chinesi included the exclusive right and responsibility to interact with the Supreme Being on behalf of the community.

Second in the Caddo hierarchy were the caddi who governed individual communities. Under the caddi were the tama who handled the daily administrative tasks, including announcing the arrival of visiting delegations, announcing the return of war parties, and calling people together for meetings.

In making a decision, the caddi would call together a council of the elders. In council discussions it was considered impolite to interrupt. Therefore, each would speak and all of the others would listen intently. When one speaker finished, then another would begin. The order of the speakers was determined by age.

“He is obeyed with great punctuality and without anyone contradicting his orders.”

Among the Caddo, as well as some of the other Southern Plains tribes, there were women chiefs. The reports of the Spanish and French explorers make mention of women who governed the nation, but there is little information other than this.