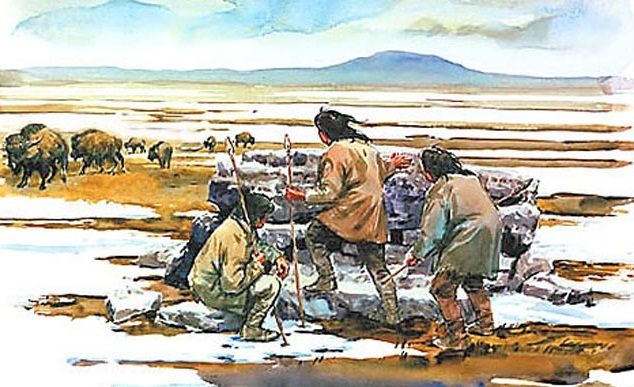 At the time when the Europeans began their invasion of this area it was the home to Indian nations such as the Ponca, Omaha, Osage, Otoe, Quapaw, Iowa, Missouria, Kansa (also known as Kaw), Pawnee, and Wichita.

Some of the migrations of the tribes of the Central Plains include:

At one time the Omaha and the Ponca lived in the Ohio River valley. They moved onto the eastern portion of the Central Plains in the late 1600s. In their 1917 book Corn Among the Indians of the Upper Missouri, George Will and George Hyde place the date of their arrival on the Plains at prior to 1700 but not earlier than 1675. According to Will and Hyde:

“The traditions of these tribes tell of their migration northward through the State of Iowa to the vicinity of the pipestone quarry; then west to the Big Sioux River, where they were attacked by enemies and forced to remove to the Missouri River, in South Dakota.”

After moving into the Central Plains, they divided into two groups: Omaha and Ponca. This occurred about 1715. According to archaeologists John O’Shea and John Ludwickson, in their book Archaeology and Ethnohistory of the Omaha Indians: The Big Village Site:

“the Ponca tribe may have originated as an Omaha clan that split from the rest of the tribe, a suggestion supported by the fact that the other Dhegiha tribes have a Ponca clan, but the Omahas do not.”

The Omaha settled for a while in South Dakota where they were in close contact with the Arikara and from the Arikara they adopted many elements of Plains material culture as well as a number of social and ceremonial features. Oral history tells that the Omaha and the Ponca learned to make earth lodges from the Arikara. However, because of poor corn harvests and conflicts with the Arikara, they moved south into present-day Nebraska. At this time, the Ponca numbered about 3,000 people and set up their camp in three concentric circles. The Omaha set up their camp in two circles.

When the Ponca separated from the Omaha, they left with the Omaha all of the tribe’s sacred objects and ceremonies. For this reason the Omaha refer to the Ponca as “orphans.”

Writing about the Omaha migration in his book American Indian Holocaust and Survival: A Population History Since 1492, sociologist Russell Thornton reports:

“Tribal ancestors were originally from the Appalachian Mountains and possibly from as far east as the Atlantic Coast.”

Ethnographers Alice Fletcher and Francis La Flesche, in their 1911 ethnography The Omaha Tribe, put it this way:

“The primordial habitat of this stock lies hidden in the mystery that still enshrouds the beginning of the ancient American race; it seems to have been situated, however, among the Appalachian mountains, and all their legends indicate that the people had knowledge of a large body of water in the vicinity of their early home. This water may have been the Atlantic ocean.”

The Quapaw, Osage, and Kansa once lived in the Ohio River area with the Omaha and Ponca. It is estimated that 400 years ago these five tribes were united in language and culture. Linguists refer to the five tribes as the Degiha Siouans. They migrated west to the Mississippi River where the Quapaw went to the south and the Osage and the Kansa went to the north. The name Quapaw comes from uga’xpa which means “with the current” or “downstream”.

The Iowa, Otoe, and Missouria tribes were at one time a part of the Winnebago. According to Iowa oral tradition, the Iowa once lived with the Winnebago near present-day Green Bay, Wisconsin. They then migrated west toward the Mississippi River. Their migrations took them into Minnesota and Iowa, then south along the Missouri River and eventually into the present-day state of Missouri.

The Pawnee are a Caddoan-speaking group who separated from the other Caddoan groups long before the European invasion and began a migration north from their homelands in present-day Texas. They migrated first into the Red River region of present-day Oklahoma and then into the Arkansas River region of northern Oklahoma and southern Kansas. By the early 1700s, the Pawnee had begun to divide into four politically autonomous tribes: Skiri, Chawi (Grand), Kitkahahki (Republican), and Pitwhawirata (Tappage). The Skiri (also known as the Skidi, Loup, or Panimaha) migrated north to the Loup River. The Wichita are also a Caddoan-speaking group who migrated north from their homelands in Texas to the Canadian River in present-day Oklahoma.