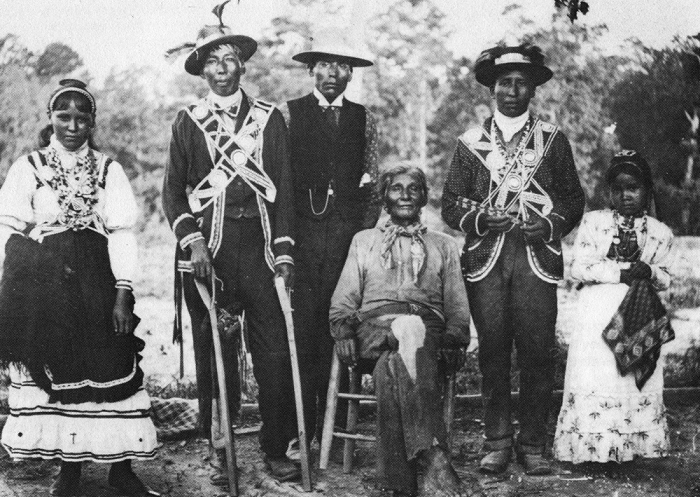 The Choctaw, at the time of European contact, were a loosely organized confederacy composed of three distinctly different divisions: Okla Falaya (Long People), Okla Tannap (People of the Opposite Side), and Okla Hannalia (Sixtown People). The people were living in more than 100 autonomous villages.

With regard to language, Choctaw is a Muskogean language which means that it is related to Chickasaw, Creek, and other Southeastern languages.

In her book Slavery in Indian Country: The Changing Face of Captivity in Early America, Christina Snyder writes:

“The Choctaws’ ancestors had lived in chiefdoms strewn across the modern states of Mississippi and Alabama.”

They later moved into east-central Mississippi, an area that was a buffer zone between chiefdoms. According to Christina Snyder:

“The region did not possess rich soil, but it abounded in game. In this new place, the Choctaws sought to overcome their divisions and forge a new multiethnic confederacy.”

While there is a stereotype that portrays Indians as “living by the hunt,” the Choctaw, like the other Indian nations in the Southeast, were farmers who had been cultivating corn for about 3,000 years. In addition to corn, they also raised beans, squash, sunflowers, and melons.

With regard to Choctaw government, anthropologist Sandra Faiman-Silva, in her book Choctaws at the Crossroads: The Political Economy and Culture in the Oklahoma Timber Region, writes:

“Local Choctaw leadership was apparently fluid and flexible, with individuals competing for loyal followers among their kin base.”

In other words, chiefly status at the local level stemmed from kinship and generosity. During annual cycles of feasting, the local chiefs would redistribute communal wealth.

“…the Choctaws had a more democratic system of government than other Southeast tribes. In this regard they were more like the Northeast tribes, who did not have autocratic rulers with absolute power.”

The local Choctaw towns—estimated at 40 to 50—were grouped into three districts: Upper Towns, Lower Towns, and Sixtowns. At the district level, chiefs were selected from the senior matrilineal clan in the district. While there was a mingo (leader) for each district, there was no single overall mingo. In his book The Removal of the Choctaw Indians, Arthur DeRosier reports:

“The position was not hereditary, but an illustrious ancestor was the greatest advantage an aspirant for office could possess.”

The war chiefs represented the military arm of the district and were under the complete control of the mingo.

Choctaw men were ranked into four groups: mingoes (the peace and war chiefs); Beloved Men (leading warriors); Common Warriors; and “those who have not struck a blow or who have killed only a woman or child.” At public gatherings, the men were seated according to their rank.

The Choctaw national council meetings would be held in the village of a host mingo. All would assemble in the village square where the delegates would take their seats on two rows of wooden benches. Arthur DeRosier writes:

“The precouncil ceremonies were elaborate and formal, indicative of the discipline and humility of the Choctaws.”

After lighting a fire on top of the burial mound of the village, the host mingo would hold up the appropriate number of fingers to indicate the number of issues that the council was to consider. He would then take his seat.

During the discussions, unlimited speaking time was allowed each delegate. At the conclusion of the discussions, the host mingo would summarize the decisions. Speaking slowly and deliberately, he would pause at the end of each sentence. If what he said met with approval, the delegates would exclaim ma! (yes).

Choctaw women participated in the political system indirectly through their power in the matrilineal clans. It was generally recognized that if the women wanted a certain man to become chief, then that man was generally elected to the position.