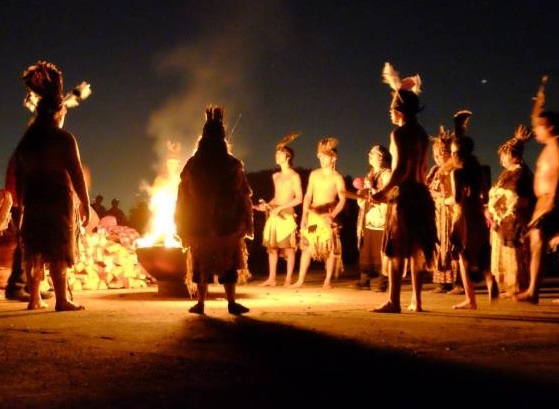 Traditionally, Apache religious ceremonies focused on curing, hunting and gathering rituals, puberty ceremonies, and obtaining personal power and protection. While spiritual power is available to most people, spiritual leaders–usually called medicine men and medicine women–are people who have greater access to spiritual power than other people.

Among the Apache groups, the Gans (gaans) or Mountain Spirits are important in their ceremonies, particularly the Mountain Spirit Dance. In his book Encyclopedia of Native American Tribes, Carl Waldman writes:

According to oral tradition, the Gans brought agriculture to the people and are the guardians of wildlife.

Some of the Apache ceremonies include:

Among the Western Apache the Girls Puberty ceremony, generally known as the Sunrise Ceremony or Sunrise dance, invests in young girls the qualities which are felt to be important for adulthood. This ceremony is generally conducted in the summer. The ceremony is known as Na’íí’ees which means “preparing her” or “getting her ready”. This is an elaborate ceremony which has consequences for the entire community. According to anthropologist Keith Basso in his book The Cibecue Apache:

“The puberty rite differs from other Western Apache ceremonials in several respects, but most conspicuously in the amount and richness of its symbolism.”

“For the community, it is a time to reaffirm kinship ties, participate in a social dance and benefit from the girl’s being imbued with the power of Changing Woman to cure sickness and bring rain for the four days following the Na’íí’ees.”

Among the Jicarilla Apache the ceremony is performed in a large tipi that faces east. During the four-day ceremony, the girl and her partner (an adolescent male of the same age) listen to sacred songs about tribal origins. The ceremony stresses the positive traits that people should imitate in their own lives.

Writing about the Chiricahua Apache, in an article in American Indian Art, Cécile R. Ganteaume, the associate curator at the National Museum of the American Indian, writes:

“The ceremony is composed of a series of ritual events performed to instill the values of personhood in the girl, or sometimes girls, for whom the ceremony is being held.”

During the ceremony, the girl is united spiritually and personally with the most revered of the Chiricahua’s ancestors, White Painted Woman. Chiricahua elder Elbys Naiche Huger, in an essay in We, The People: Of Earth and Elders—Volume II, notes:

“Here we say White Painted Women, other Apaches might say Changing Woman or call this a Sunrise Ceremony.”

Among the Chiricahua Apache, the Cradle Ceremony is conducted four days after birth. According to John J. Collins, in his book Native American Religions: A Geographical Survey:

“The significance of this brief rite was to spare the child from evil influences so that it would occupy the cradle in the future.”

In other words, after this ceremony the child could be placed in the cradleboard without suffering any evil influences.

The Apache have the First Moccasin ceremony to celebrate a child’s first steps. The ceremony is held at the new moon with the children wearing newly made outfits and their first moccasins. The purpose of the ceremony is to keep the children healthy and strong. The ceremony includes a feast and a gift give-away as well as songs, prayers, dances, and blessings with pollen.

The Holiness Rite is an Apache curing ceremony which relieves bear and snake sickness (that is, sickness which was caused by encounters with a bear or a snake). The complex, four-day ceremony may treat up to 12 patients. During the ceremony, the patients are subject to treatments which are intended to frighten away the bear and the snake.

Among the Jicarilla, the Holiness Rite is also known as the Bear Dance and is usually performed for three days before and during the appearance of the full moon (for a total of four days). The ceremony cures bear, snake, and other sicknesses which are caused by Wind or Fire. The ceremony takes place in a large enclosure (about 80 feet in diameter) which has an opening to the east. Within the enclosure on the west side is a tipi which faces east. The patients are confined to the tipi during the ceremony.

The Lightning Ceremony is a White Mountain Apache ceremony which is done to protect the people from the danger of lightning. In addition, the ceremony brings the rain and insures good crops.

Spirituality and Jimsonweed Among California Indians