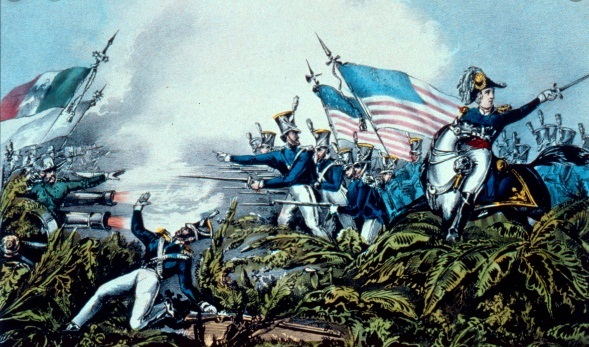 United States military forces occupied California during the Mexican-American War (1846-1848). In 1850 California was admitted to the Union as a free state, that is, a state in which slavery was supposedly prohibited. However, the concept of free did not apply to the Indians who lived in the state and they soon encountered American deception at both the federal and state levels.

One of the first acts of the newly created state was to pass an Act for the Government and Protection of Indians. The Act stated that while both non-Indians and Indians might take complaints before a justice of the peace, that “in no case shall a white man be convicted on any offense upon the testimony of an Indian.” In others words, Indians became invisible to the justice system. In effect, a non-Indian could commit a crime against an Indian-murder, rape, robbery-and could not be tried for that crime unless another non-Indian had witnessed it.

The Act also allowed non-Indians to obtain Indian children by going before a justice of the peace and securing a certificate which allowed them to have the care, custody, control, and earnings of these children. The illegal sale of Indian children became common and during the next 13 years an estimated 20,000 California Indian children were placed in bondage. While California was a free state, these Indian children were slaves in all but name. They worked as servants, laborers, and concubines until they were considered adults.

The Act also provided a mechanism by which Indians could be legally taken and forced to become unpaid servants or laborers. The law empowered non-Indians to arrest Indian adults for a number of offenses, including loitering. Once arrested the captives were sold to the highest bidder. The Indians were then required to work for four months without compensation. Since the Indians were not allowed to testify in court, the 1850 Act opened the door to abduction and involuntary servitude.

The Act also stipulated that if an Indian were arrested for a crime such as public intoxication, the fine could be paid by a non-Indian and the prisoner would then be required to work for the person who paid the fine until the debt was paid. The Indian had no voice in this matter. The terms of the transaction-the amount of the fine and the length of “service”-were to be set by the judge and the person who paid the fine. For many ranchers in California, this was an inexpensive way of obtaining ranch hands.

The act also curtailed Indian land rights and set the stage for non-Indians settling on and obtaining title to Indian lands.

In 1851, the United States federal government negotiated 18 treaties with California Indian nations which were intended to secure legal title to public land and which were meant to guarantee reserved lands for Indians. The Indian commissioners explained to the non-Indian residents of the state that the government had two options: to exterminate the Indians or to “domesticate” them. They argued that “domesticating” them was more practical.

None of the American commissioners who arranged the California treaties knew anything about California Indians. What they did was to travel around until they could collect some Indians for a council, meet with them, and effect the treaty explanation and signing. There is a great deal of doubt as to whether or not the Indians really understood what the whole treaty process was about.

In the treaty council with the Karok, Yurok, and Hupa, the government promised to give the Indians a protected reservation and gifts if they would agree to wear clothes, live in houses, and become farmers. The government was apparently unaware that these groups had been living in plank houses far longer than had people of European heritage.

Signing the treaty for the Hupa were what the Americans call the “head chief” and “under chiefs.” In actuality the men who signed the treaty were probably the tribe’s spiritual leaders. While none of these men had formal authority over all of the villages, they were men of great influence in the tribe.

While these treaties were signed by both Indian and U.S. government leaders, they were not debated in Congress, thus did not appear in the Congressional Record. For more than 50 years they were hidden from public and legal view. The ratification of the treaties had been strongly opposed by the California legislature and it was rumored that state representatives had the treaties hidden in the archives of the Government Room in Washington, D.C. Ensuing legislation at the state level then deprived California Indians of the rights to their land. The Indians, with no rights under the state and unprotected by treaties, became wanderers, hounded and persecuted by non-Indians. The failure of the federal government to ratify the treaties left the federal government without explicit legal obligation toward the Indians of California.

“That a war of extermination will continue to be waged between the races until the Indian race becomes extinct, must be expected… the inevitable destiny of the race is beyond the power or wisdom of man to avert.”

During the next year more than a million dollars would be paid out in bounties for Indian scalps and numerous small battles and massacres were encouraged by state and local officials.

At Clear Creek, the Americans destroyed a natural bridge to keep the Wintu on the western side of the creek. American miners then burned the Wintu council house in the town of Old Shasta and massacred about 300 people. Following the massacre the Wintu consented to the “Cottonwood Treaty” which gave them about 35 square miles of land.

In San Diego County, the Cahuilla, Quechan, and Cocopa under the leadership of Antonio Garra, Jr. revolted against the American federal, state, and local governments. The cause of the rebellion was a state tax imposed on Indian property. Garra attempted to put together a confederacy of several tribes, but was captured by a rival Cahuilla band and turned over to the Americans. He was tried in a paramilitary court, found guilty, and shot.

In the Shasta Valley, the Modoc were accused of raiding ranches for horses and cattle. In response, the ranchers organized a party of volunteers to recover the livestock and kill the Modoc. The volunteers killed 20 Modoc men and captured 30 women and children.

In another instance, the Yahi were accused of stealing a cow, and in response the Americans burned the village on Mill Creek.

During the next 50 years, California Indian population decreased by 80%.