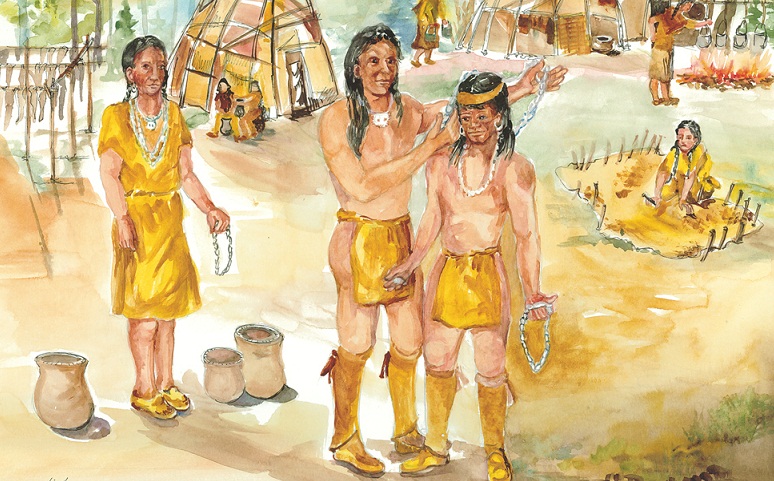 The time period from about 400 CE to 900 CE in northeastern North America is called the Late Woodland period by archaeologists. This was a time of major population growth and the introduction of new technology, including the bow and arrow.

While a native agriculture had developed in North America prior to this time, it was during the Late Woodland that new domesticates-maize (corn), beans, and squash (often called the Three Sisters)-diffused into the Northeast from Mexico. During this time, the Three Sisters became more important to the subsistence of Indian people.

The “Three Sisters” have a long history among Indian peoples, not only in the Eastern Woodlands, but also in the Southwest. These three crops complement each other. The beans add nitrogen to the soil, which the corn consumes and the heavy stalks of the corn provide support for the climbing bean vines. The corn also provides shade which the squash needs to reach maturity.

By 450 CE, archaeologists report that Hopewell farmers along the Scioto River in Ohio were raising corn. Other elements of their diet included deer, rabbit, turkey, hickory nuts, acorns, fish, shellfish, and turtles.

Archaeologists report that by 560 CE, Indian people throughout the region around present-day Rock Island, Illinois, were cultivating the oily-seeded sumpweed and sunflower, as well as pepo squash, bottle gourd, and tobacco.

By 600 CE, maize agriculture had diffused as far north as Michigan. Indian people at the Gard Island 2 site, the Indian Island 4 site, the Sisssung site, and the Leimbach site had corn. All of these sites are located around western Lake Erie.

At this time in west-central Illinois, Indian people had an economy based on both farming and gathering. Cultivated plants included maygrass, goosefoot, knotweed, sunflower, and tobacco. Small amounts of squash and corn were also grown. The people were living in year-round villages which had earth ovens and pit storage facilities.

By 750 CE, corn had become more important in the diet of Indian people in the American Bottom Region of western Illinois.  The increased importance of corn did not result in the abandonment of local seed crops. Maize required less labor, both in harvesting and processing, while providing greater yields.

With agriculture there was an increased concern with astronomy as a way of predicting the seasons. Astronomy in North America, as in other parts of the world, was often incorporated into ceremonies which both marked and celebrated events such as solar solstices and equinoxes as well as stellar events.

About 500 CE, Indian people constructed a feature on a promontory overlooking an oceanic bay in what is now Rhode Island. The feature was a large rectangular enclosure which had a ditch adjacent to a bank of stone and earth. This may have been used as an observatory. While non-Indians later saw this as a fort and named it Ninigret’s Fort, there is no archaeological evidence that any battles were fought here or that it was in fact a defensive structure.

About 600 CE,  the underground chamber at Gungywamp in Connecticut was in use. The chamber was entered through a stone-lined tube which was aligned so that the sunlight illuminates the back wall on the equinox.

In 710 CE, Indian people constructed an astronomical observatory in the Upton, Massachusetts area. The structure, shaped somewhat like an igloo, has a ten-foot wide interior chamber which is entered through a 14-foot- long tunnel. The structure was built from stone using a corbelled arch technique. The chamber is aligned to allow for viewing seasonal constellations. A large rock cairn was also constructed on the hill to line up with the chamber’s entrance. The chamber was used ceremonially in conjunction with other sites in the area.

About 800 CE, Indian people began building a structure at Cahokia in what is now Illinois which archaeologists would later dub as Woodhenge. This was a solar calendar which used a series of wooden posts placed in the ground at certain intervals. The calendar showed the first days of summer and winter, the first days of spring and fall, as well as other special festival dates related to the agricultural cycle.

Indian people have often migrated and the stories told by both linguistics and tribal oral traditions helps to document these migrations. A number of migrations are documented during the Late Woodland period.

About 400 CE, the American Bottom Area in Illinois was occupied by people coming in from the north. The cause of this population shift may have been due to increased population in the Illinois River valley which, in turn, caused pressure on area resources and an expansion into marginal areas.

About 450 CE, the Indian people who had settled in the upland areas adjacent to the Mississippi River flood plain in Illinois had overexploited locally available natural resources. As a result, the villages fissioned as household groups were forced to settle in more remote areas. They continued to follow the pattern of settling on ridges overlooking streams.

By 770 CE, Indian people occupied the Shantok Cove site near present-day New London, Connecticut. The people who occupied this site appear to be ancestral to the Pequot and Mohegan.

By 650 CE, there were fortified, moated, and defensively located sites throughout the greater Midwest area. Some archaeologists feel that the development of these defensive sites was a result of the wide-spread adoption of the bow and arrow which increased competition and warfare.

About 700 CE, long-distance trade in southern Ohio became intensified. Coming in from the east were items made from steatite and nephrite. Pipes made from steatite were made on the Atlantic coast and then traded west in finished form. Other trade items included bi-pointed picks which came in from the north. The Indian people in Ohio were also obtaining marine shell beads and columella pendants.