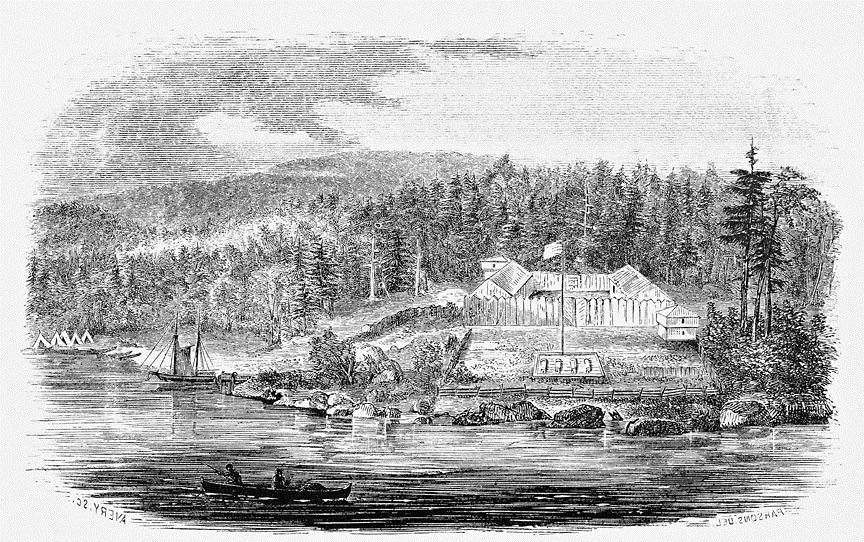 The Pacific Fur Company was founded in 1810 for the purpose of exploiting the fur resources of the Pacific Northwest. Half of the stock in the company was held by the American Fur Company which was owned by John Jacob Astor, one of the richest men in America and a prominent fur trader. Astor’s inspiration for this project came from two sources: (1) the publication of Sir Alexander MacKenzie’s book describing his overland journey to the Pacific, and (2) the reports from the American Corps of Discovery led by Meriwether Lewis and William Clark which had also traveled to the Pacific. Inspired by the reports of the possible great wealth in this region, Astor set out to establish a trading post at the mouth of the Columbia River.

Astor envisioned a permanent American settlement at the mouth of the Columbia River which would serve as trading hub linking New York City, Oregon country, and China. The basic plan was to load Indian trade goods onto ships in New York City and transport them to the Columbia where they would be used in acquiring furs and pelts. These furs and pelts would then be transported to China where they would be traded for porcelain, silk, spices, and other goods which would then be transported back to New York. It was a business plan designed to increase Astor’s wealth at the expense of the subsistence patterns of the Indians.

In order to establish his new trading center at what would become Astoria, Oregon, Astor sent out two expeditions: one by sea and the other by land. The sea expedition arrived at the Columbia River in 1811 and established Fort Astoria. As the Astorians were setting up the fort, David Thompson and his North West Company party arrived. Thompson told them that he had already taken possession of the country upstream and had established a permanent post on the Spokane River. This marked the beginning of the struggle between the powerful North West Company (commonly called the Nor’westers) and the newly organized Pacific Fur Company for domination of the fur trade in the Pacific Northwest. The Astorians saw themselves fighting for the supremacy of the United States against British Dominion.

The American traders soon find that Chinook women are as active in the trading process as are the men. The Americans also started the practice of bringing in Native Hawaiians, known as Kanakas, for work in the fur trade.

On the ground in Oregon, many of the Astorians were in fact former Nor’westers and knew David Thompson. From Fort Astoria, the Astorians under the leadership of David Stuart, a former Nor’wester, and David Thompson’s Nor’westers started upstream on the Columbia River together. The two parties, however, did not travel far together. The Nor’westers were traveling light and their canoes were not loaded with any merchandise for trade. The Astorians did not have canoes suitable for up-river work. At the mouth of the Columbia they had obtained two large coastal dugout canoes. While this type of canoe was a good coastal vessel, it was not a good upstream craft. After reaching the cascades on the Columbia, the Nor’westers, who were able to travel much faster, separated from the Astorians.

Near the location of present-day Wenatchee, Washington, the Astorians met a great number of Indians. Chief Sopa presented them with two horses and the Astorians then purchased four more horses from him.

At the mouth of the Methow River, the Astorians found a great gathering of Indians who had many horses for sale. The Indians invited the Astorians to stay with them and trade through the winter. They assured the traders that their country abounded in beaver and that there was plenty of game for food.

After 42 days of travel up the Columbia River, the Astorians reached the mouth of the Okanogan River. Here they established Fort Okanogan to serve the Indian people in the Upper Columbia River area and to provide competition with the Nor’westers. David Stuart wrote:

“The general aspect of the surrounding country is barren and dreary, but to the north the banks of the river are lined with the willow and poplar, and the valley through which it meanders presents a pleasing landscape.”

Fort Okanogan became the first settlement under the U.S. flag in what would become the state of Washington.

The following spring, some of the Astorians made the journey back to Fort Astoria carrying with them about 2,500 beaver skins.

The Kootenai prophet Kauxuma-nupika (“Gone to the Spirits”), a woman who has taken on the role of a man and has married a women, acts as a courier for the North West Company, carrying letters from Kettle Falls in eastern Washington to Fort Astoria.

The party which Astor had sent overland to Fort Astoria arrived in 1812. The party left the goods they had transported overland and began the overland trip back with orders for the supplies for the coming year. While passing through Montana on their return trip, the Crow liberated all of the Astorian horses.

In 1812, the Pacific Fur Company continued to expand its trading area in the Columbia River basin. The Astorians established their Fort Spokane adjacent to the Nor’westers’ Spokane House. On the surface the relationships between the two adjacent trading posts seemed cordial. One of the Astorians wrote:

“When the two parties happened to meet, they made amplest protestations of friendship and kindness, and a stranger unacquainted with the politics of Indian trade, would have pronounced them sincere, but the moment their backs were turned they tore each other to pieces. Each party had its maneuvering scouts out in all directions, watching the motions of the Indians and laying plots and plans to entrap or foil each other. He that got the most skins, never minding the cost of the crime, was the cleverest fellow, and under such tutors the Indians were apt disciples.”

Under the leadership of Donald McKenzie, the Pacific Fur Company established a fur trading post at the confluence of the Snake and Clearwater Rivers near present-day Lewiston in Nez Perce country. McKenzie soon found that the Nez Perce were reluctant to trap furs for them. The Nez Perce were willing to trade, but they wanted to trade things they owned or produced, like clothing, food, and horses. They were not willing to become beaver trappers and laborers for the Astorians. While the Indians were interested in the manufactured goods that the Astorians brought to trade, they felt that the prices were too high.

In 1813, the Pacific Fur Company established a trading post at the confluence of the Snake and Boise Rivers in Idaho. The post was located at a traditional Bannock summer camping area where the people fished for salmon. The Bannock were not happy about the post’s location.

In 1813 at Fort Astoria, Pacific Fur Company trader Duncan McDougall married the daughter of Chinook chief Comcomly. From Comcomly’s perspective this increased his access to European goods. From the Astorian’s perspective, this connection provided both economic and physical security.

In the spring of 1813, word reached the Spokane establishments that war was breaking out between the United States and Great Britain. When word of the war reached Fort Astoria, the trading partners held a council. They realized that they were in a vulnerable position as they were unprotected by a British war ship. After much discussion, it was decided to attempt to trade for another year, and trading parties were sent out from Fort Astoria once again.

In 1813, Pacific Fur Company trader John Clarke travelled from the Spokane River area to the Palouse village of Palus where he prepared his canoes for the journey down the Snake and Columbia Rivers. In order to impress the Indians, he brought out two silver goblets, poured a little wine in one of them, and had a chief drink from it. The next morning, the trader found that one of the goblets is missing. After the goblet was recovered, traders then hung the man believed to have taken the goblet. The incident provoked hostility toward the Americans from all of the neighboring tribes. Indians have long memories, and for many years they continued to remind the Americans of this event.

The Nor’westers were quick to see that the war between the United States and Great Britain presented them with an interesting opportunity. The British sloop-of-war, Racoon, was on its way to capture Fort Astoria. In addition, the Nor’wester ship Isaac Todd was also enroute to the mouth of the Columbia. The Isaac Todd was armed and held letters of marque and reprisal and was therefore a duly accredited privateer and in a position to seize Fort Astoria as a prize of war. At the same time, a Nor’wester brigade of ten canoes was hurrying down the Columbia with full authority to purchase all of the holdings and property of the Pacific Fur Company.

On November 12, 1813, Duncan McDougal, the factor in charge of Fort Astoria, sold the entire enterprise to the North West Company. The American flag was hauled down and the Union Jack was raised. The fort was then renamed Fort George. When the Racoon arrived, her captain took formal possession of the country for England.

All of the Astorian trading posts now became property of the Nor’westers. When Fort Spokane was taken over by the North West Company, the name Spokane House was transferred to the new facility. Most of those who worked there, however, continued to refer to it as Fort Spokane. Most the traders who had worked for the Astorians went to work for the Nor’westers.

Museums 101: Trappers and Traders in the High Desert (Photo Diary)