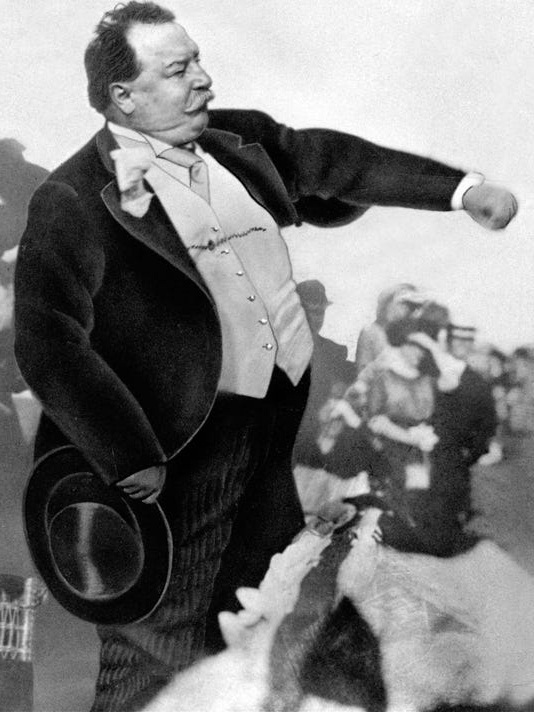 William Howard Taft served as President of the United States from 1909 to 1913. Like most American Presidents, Taft took office with little background in or awareness of American Indians. Yet during his term as a progressive Republican he impacted the lives Indian people.

In 1910, a circular from Indian Commissioner Valentine was distributed to all Bureau of Indian Affairs superintendents and agents. The circular cited section 2103 of the revised statutes of the United States and indicated that the Bureau had the power to deny individuals the power of attorney and the power of representation. In addition, they could keep individuals from speaking to Indian groups on reservations.

During Taft’s term as President, one of the major foci of Indian policy was on the allotment of the reservations. In general, the United States has strongly opposed the idea of Indians owning land in common and has insisted that the reservations be broken up into small, individually owned parcels to free up land for non-Indians and to ensure the continued poverty of Indian people. While the data showed clearly that allotment benefitted non-Indians and was detrimental to Indians, the Bureau of Indian Affairs and Congress continued to push the idea of allotment.

In 1909, the allotment of the Coeur d’Alene reservation in Idaho was completed: 638 Indians received allotments. Of those receiving allotments, 541 were Coeur d’Alene and 97 were Spokan. President Taft ordered that all of the non-mineral and unreserved lands on the reservation be opened for settlement under the Homestead Laws.

Commissioner of Indian Affairs Valentine was a staunch supporter of allotment and advocated competency commissions to speed up the transfer of Indian land into private hands. The idea of competency was based in large part on the racist idea that if Indians had any non-Indian “blood” then this somehow made them competent to manage their affairs in the non-Indian world. Congress in 1910 authorized the Bureau of Indian Affairs to create competency commissions to determine which Indians were capable of managing their own affairs. Competent Indians were to be given title to their land (which meant that they were able to then sell it) and declared citizens. The Bureau of Indian Affairs was given more authority over Indian property.

In 1910, Congress gave Indians the rights to the live timber on their reservations. The Bureau of Indian Affairs appointed J.P. Kinney, a graduate forester, to head the Bureau’s forestry division. He visited 12 western reservations and objected to designating timber lands as surplus so that they could be opened for non-Indian settlement by homesteaders with no intention of farming but rather selling the timber, clear-cutting, and leaving. He argued that controlled cutting would provide sizable long-term income for the Indians. Disregarding the advice of the forester, of Commissioner Valentine, and of Gifford Pinchot of the Forest Service, the Department of the Interior declared that the program of having timber lands managed for the long-term benefit of the Indians was illegal.

In 1910, the Shoshone and Bannock of the Fort Hall Reservation in Idaho sent a delegation to Washington, D.C. Under the leadership of Shoshone leader Ralph Dixey, one of the largest cattle and farm operators on the reservation, the delegation argued that their allotments should be based on the 1889 agreement which calls for 160 acres of farmland and 160 acres of grazing land. Government officials, however, were unmoved by the arguments of the Shoshone and Bannock and replied that the government had their best interests in mind when they unilaterally changed the agreement. In addition, the government officials told them, under the Supreme Court ruling in Lone Wolf v Hitchcock the government was able to change any agreement if it wished.

Government actions appeared to have been based on the idea of opening the reservation up for non-Indian settlement rather than promoting an Indian livestock industry. By restricting the number of acres of grazing land which were to be allotted to the Indians, the government made sure that: (1) the Indian cattlemen could not compete economically, and (2) there would be more land available for non-Indians.

In 1912, the Commissioner of Indian Affairs asked Indian superintendents to tell him about the effects of fee patents on the Indians on their reservations. With regard to the Omaha reservation, 90% of those who had been issued fee patents by the competency commission had already sold their land, 8% had mortgaged their land, and only 2% still retained their allotments.

Rainbow Bridge in northern Arizona is an area considered sacred to the Navajo people. In 1910, President Taft designated Rainbow Bridge a National Monument by executive order. The area was removed from reservation jurisdiction without tribal consent or compensation.

In Arizona, California, and Nevada, the Fort Mohave Reservation was enlarged by Presidential Executive Order in 1910. The following year, President Taft issued an executive order revoking the enlargement of the reservation.

President Taft issued an executive order creating the 47,600 acre Ak-Chin reservation in Arizona in 1912. The reservation is created in part in gratitude to the Papago for their help in the wars against the Apache in the late 1800’s. The Bureau of Indian Affairs filed for a water appropriation on behalf of the Ak-Chin Indian Community which called for a total of 70,000 acre-feet annually. Non-Indians in the area were upset about the size of the reservation and about the water appropriation, and within four months of the original executive order, President Taft issued a second executive order which reduced the size of the reservation to 21,840 acres.

In 1912, President Taft issued an executive order setting aside 80 acres in Utah’s Skull Valley for the exclusive use of the Gosiute.

In 1912, the Hupa Reservation in California was restored by President Taft to its status prior to the 1908 proclamation by President Roosevelt which gave most of the reservation to the Trinity National Forest. Although this meant that the Hupa supposedly recovered their lands, many government employees continued to assume that the land belonged to the Forest Service which continued to administer it.

In 1909, the Bureau of Indian Affairs assigned a special agent to deal with the “peyote problem” in Oklahoma. When the agent failed to convince the courts that peyote was included in the current prohibition laws, he simply raided peyote meetings and destroyed all of the peyote buttons that he obtained.

The Board of Indian Commissioners began to lobby Congress for a law to outlaw peyote in 1912. According to their annual report:

“The danger of the rapid spread of the habit, increased by its so-called religious associations, makes the need of its early suppression doubly pressing.”

Delegations from several tribes – Omaha, Cheyenne, and Arapaho – visited Washington to express their opposition to attempts to outlaw peyote. The Commissioner of Indian Affairs, however, told Congress:

“I firmly believe that the use of Peyote is injurious to the health and welfare of the Indians and, therefore, shall do everything within my power to prevent its use among Indians.”