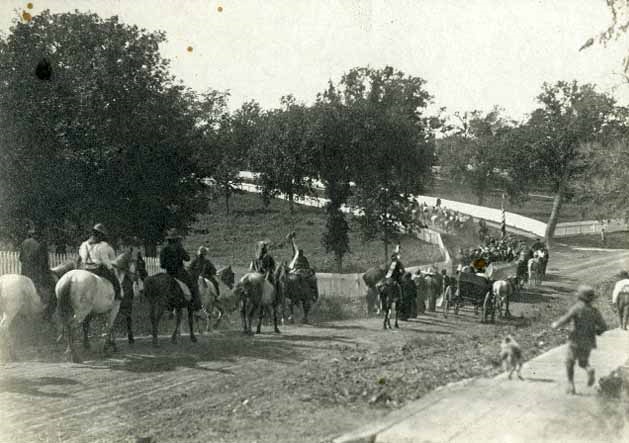 During the nineteenth century, the United States had attempted to settle all Indians on well-defined reservations on lands deemed unsuitable for non-Indian development. Here Indians were to remain until they became extinct or had fully assimilated into the Christian American lifestyle. By the end of the nineteenth century, the government began the process of dismantling Indian reservations and increasing the pressures to assimilate. During the early twentieth century, for example, the United States had dissolved all of the tribal governments in Oklahoma so that the territory could become a state. By 1916, a majority of Indians still lived on reservations where they were considered wards of the government. In general, the reservations were pockets of poverty with poor health care and few educational opportunities. Briefly described below are a few of the events of 1916 which are related to Indian reservations.

In Montana, President Woodrow Wilson issues an executive order to create a reservation for the landless Chippewa under the leadership of Stone Child (whose name is also translated as Rocky Boy) and the landless Cree under the leadership of Little Bear. The tribes were given part of the former Fort Assiniboine and an 8,800 acre park was placed between the tribes and the city of Havre. The reservation was named Rocky Boy after Chief Rocky Boy, the tribe’s original Chippewa leader. Only about 450 Indians, about half of those eligible, chose to settle on the reservation.

In Arizona, President Woodrow Wilson issued an executive order to create the 3.1 million acre Papago Reservation for the Tohono O’odham. The town of Indian Wells was renamed Sells after Indian Commissioner Cato Sells and became the headquarters for the new Indian agency.

The creation of the reservation was opposed by the Tucson Chamber of Commerce, the Arizona state land commissioner, and the Pima Farm Improvement Association. However, non-Indian cotton growers favored the reservation. Historian Eric Meeks, in article in the Western Historical Quarterly, explains:

“The seasonal nature of cotton production demanded that a surplus of labor be available for the harvest. However, since these workers were only needed for three or four months, it was critical that they have somewhere else to go over the remainder of the year.”

The United States used allotments as a way of breaking up reservations and allowing non-Indians to obtain what had been reservation land for little or no cost. Under the allotment system, tribal members were allotted a parcel of land and land which was not allotted was then opened to non-Indian settlement.

At the Santee agency in South Dakota, the Bureau of Indian Affairs created a ceremony to symbolize Indian progress from savagery to agrarian civilization. The Santee Sioux men who were receiving patents to their allotments came out of a tent, shot an arrow into the air, and then took hold of a plow. The agent then administered the citizenship oath, and gave each man a flag, a badge, and a purse to signify his new status. The wives took a homemakers oath, and received a flag, a badge, a workbag, and a purse.

In New Mexico, the field inspector found that the General Land Office had failed to approve about 2,900 allotment applications for Eastern Navajo. Garrick Bailey and Roberta Glen Bailey, in their book A History of the Navajos: The Reservation Years, report:

“Supposedly, the applicants did not meet improvement and residence requirements; in reality, the office was bending to local pressure, and withholding patents for no legitimate reason.”

In Arizona, the federal government purchased 460 acres of land, known as the Middle Verde, for use by the Yavapai-Apache of the Camp Verde Reservation.

In South Dakota, the new superintendent for the Sioux Rosebud Reservation decided to reorganize the business council feeling that the old one had been too concerned with promoting traditional dances. The Bureau of Indian Affairs drew up a constitution which called for a tribal council with members elected from each day school community and band camp on the reservation. According to the constitution:

“It shall be the purpose of this council to maintain harmonious cooperation with the Secretary of the Interior, the Commissioner of Indian Affairs, and the Superintendent of the Rosebud Agency.”

In Minnesota, conservative Chippewa band leaders were informed that the Secretary of the Interior had decided to restore 86 suspended tribal members to the tribal rolls. The Indian leaders complained that the Indians should have been consulted before this decision was reached and they presented evidence illustrating the reasons for suspending the 86. However, in her book The White Earth Tragedy: Ethnicity and Dispossession at a Minnesota Anishinaabe Reservation, 1889-1920, historian Melissa Meyer observes:

“Close ties between business and government in Minnesota and the nation at large may have insured that conservative Indian leaders’ pleas would fall on deaf ears.”

In the state of Washington, Thomas Bishop, the son of a Snohomish woman and a non-Indian, insisted that there were unfulfilled obligations to landless Indians. Learning that land might be available on the Quinault Reservation, he submitted applications for allotments on the reservation. While the Quinault tribal council was receptive to this, the legal counsel for the Department of the Interior declared that the reservation was intended solely for Indians on the Pacific Coast. A special agent was appointed to locate landless Indians elsewhere in western Washington.

In Washington, a group of 75 Snoqualmie gathered at Tolt and voiced a desire for land in this area.

In California, the Table Mountain Rancheria was established as a homeland for dislocated Indians living along the San Joaquin River.

In Michigan, land in Manistee County which had been logged by the Manistee Boom Company reverted to the United States and was purchased by the nephew of Ottawa band chief Pacquotuah. Pacquotuah then divided the land among the households in his band.